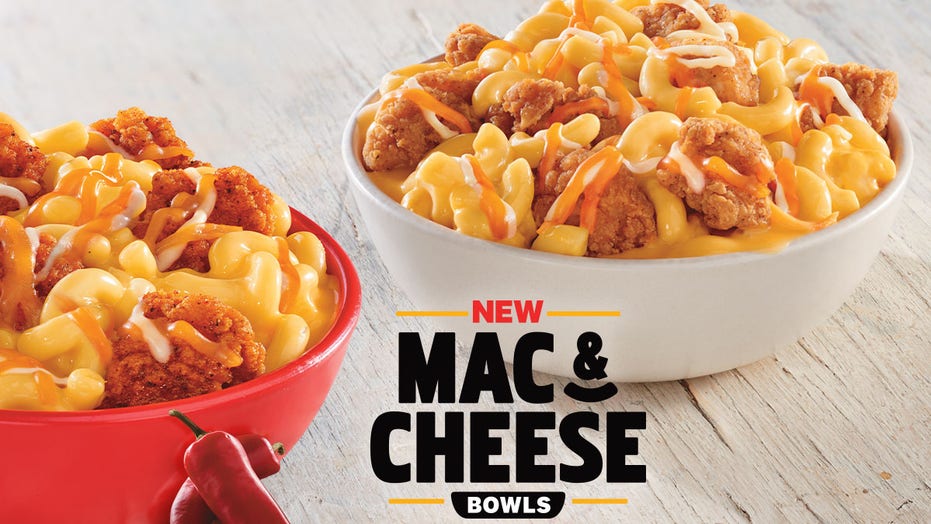 While everyone’s been focused on rival chicken sandwiches, has a mac and cheese battle been slowly building up in the fast-food world?

KFC has announced a new addition to their menu: the Mac and Cheese Bowl (which is like their Famous Bowls, only with macaroni and cheese instead of mashed potatoes and corn).

"The limited-time entrée is the latest in KFC food innovation, combining KFC’s rich and creamy mac and cheese, topped with KFC’s crispy popcorn chicken, and sprinkled with a three-cheese blend," a press release read. (KFC)

Starting on Aug. 26, customers will be able to purchase Mac and Cheese Bowls from KFC. According to the restaurant, the bowls will combine mac and cheese with the chain’s popular popcorn chicken.

"This limited-time entrée is the latest in KFC food innovation," a spokesperson said, "combining KFC’s rich and creamy mac and cheese, topped with KFC’s crispy popcorn chicken, and sprinkled with a three-cheese blend. The new menu item also comes in a spiced-up version with KFC’s spicy, smoky Nashville Hot sauce.”

This comes right on the heels of Chick-fil-A’s own cheesy announcement. Earlier this month, the fast-food chain added mac and cheese to their permanent menu nationwide, the first such addition since 2016.

“Mac & Cheese is the quintessential comfort food, and something we are so excited to offer our guests at Chick-fil-A. We think it's the perfect pairing with our Original Chicken Sandwich, nuggets and our grilled chicken offerings, but it's also great on its own as a snack,” said Amanda Norris, executive director of menu and packaging.

While the addition made headlines, it seems that not everybody was happy about it. At the time, Boston Market tweeted out a message seemingly aimed at Chick-fil-A. The fast-casual chain tweeted, “Customer: Can I get something like Boston Market mac & cheese but mediocre? Other guys: My pleasure.”

As all of this cheesy drama was unfolding, Chick-fil-A and Popeye’s got into a brief Twitter spat over their chicken sandwiches. Wendy’s even joined in, insinuating that they have the best chicken sandwich.

Things are definitely heating up in the chicken sandwiches and sides industry.