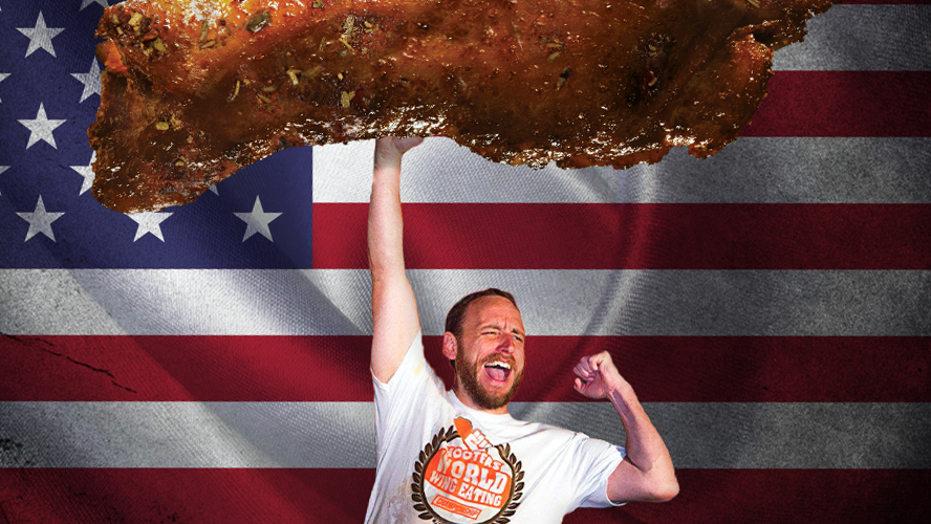 Competitive eaters down dogs on Fox Square in celebration of the holiday.

“All you can eat” means something very different to Joey Chestnut.

The reigning champion of the Nathan’s Hot Dog Eating Contest took a break from frankfurters to scarf down 413 buffalo wings in honor of National Chicken Wing Day.

Chestnut took the 12-hour challenge at a Hooters restaurant in the Mall of Georgia – just outside of Altanta – during the chain’s “all you can eat wings” promotion on Monday.

“He’s conquered nearly every eating challenge imaginable, but Joey Chestnut is teaming up with Hooters for his biggest feat yet," a spokesperson for Hooters said in a press release ahead of the event.

Before the challenge, fans were asked to guess how many wings Chestnut would consume. Those who guessed correctly would be entered for a chance to win free wings for an entire year.

As he documented on Twitter, Chestnut’s feast began at 11 a.m., and continued for 12 straight hours to 11 p.m. Fans and staff were also on hand to cheer him along the way.

“He is officially the Wing King of National Chicken Wing Day,” Hooters tweeted. The restaurant, however, has yet to announce the winners of its free-chicken-wings-for-a-year contest. The official rules indicate there are a maximum of 10 prizes, each worth $499, available.

It’s worth noting that, while Chestnut may have set a new Hooters record, he does not currently hold a record for eating the most chicken wings, in general. In 2018, competitive eater Molly Schuyler took first place in the “Wingettes” challenge at the Philadelphia Wing Bowl after eating a record 501 wings in only 30 minutes.

Paulina Dedaj contributed to this report.