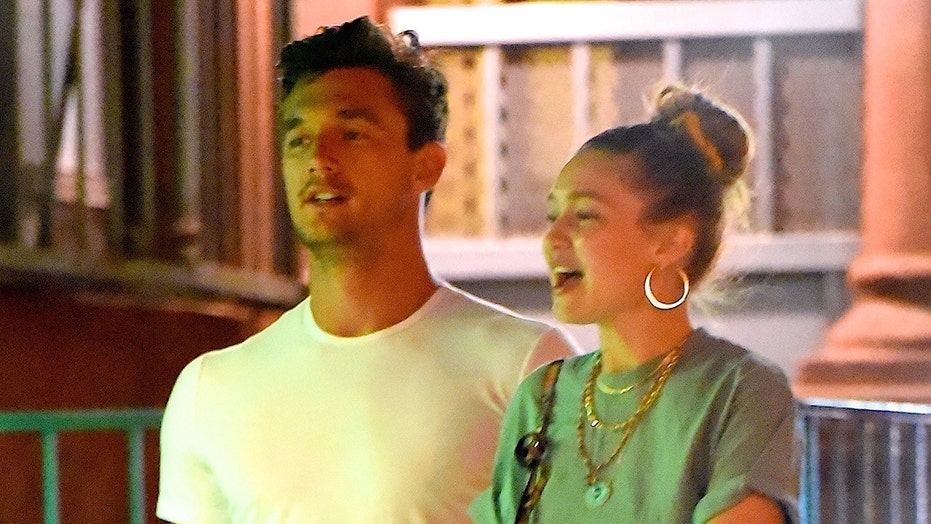 Tyler Cameron and Gigi Hadid's relationship seems to be blossoming.

The "Bachelorette" runner-up, 26, and the model, 24, were spotted out again in New York City on Tuesday night — this time walking around with a group of friends.

Hadid and Cameron kept the dress code casual as they both donned jeans and T-shirts.

Their group date night comes after the pair was spotted at Frames Bowling Lounge, also in the Big Apple, last week. Hadid and Cameron were first linked earlier this month when they were caught on a low-key date at Dumbo House in Brooklyn, N.Y.

"Gigi is definitely interested in Tyler," a source told E! News. Their first date "was very casual but they were laughing and had a very engaged conversation."

According to another source, Hadid and Cameron knew of each other before he went on the reality TV dating show.

"They have a few mutual friends in the modeling industry, but met on Instagram. She knew of him before he got any wind of fame from the Bachelorette," the source said.

Cameron is reportedly keeping his options open as he was recently also spotted hanging out with "Bachelorette" star Hannah Brown after she asked him out for a drink on the "After the Final Rose" special. Brown confirmed on social media they had the drink and Cameron was caught leaving her apartment in Los Angeles the next morning.

The new couple was out with a group of friends on Tuesday night.  (Backbrid)

But the former beauty queen did admit on Rachel Lindsay and Ali Fedotowsky-Manno‘s "Bachelor Happy Hour" podcast that she's single and so is Cameron. “We are not dating-dating, at all, we hung out, but we also had conversations of both, like, knowing that there’s still something there,” explained Brown.

“When you are in the public eye, you do have to just be respectful of each other. And yeah, I wish I would’ve got a little bit more than two days. But, you know, it is OK,' she added.

“He has every right to do whatever he wants because we were, you know, just hanging out, seeing where it goes. And I am completely fine with that,” she hinted about him spending time with Hadid.

On Tuesday, Brown confessed on social media that she's been having a hard time adjusting to life post-"Bachelorette."

“The woman who has emerged would shock the mirror-image young girl from a year ago,” she wrote. “I have so many blessings to be thankful for. However it’s uncharted territory for me, and it’s been hard to really process what the heck is going on. Maybe I needed write this out to remind myself I’m human and it’s okay to be overwhelmed. And maybe, I just needed to remind you guys too.”