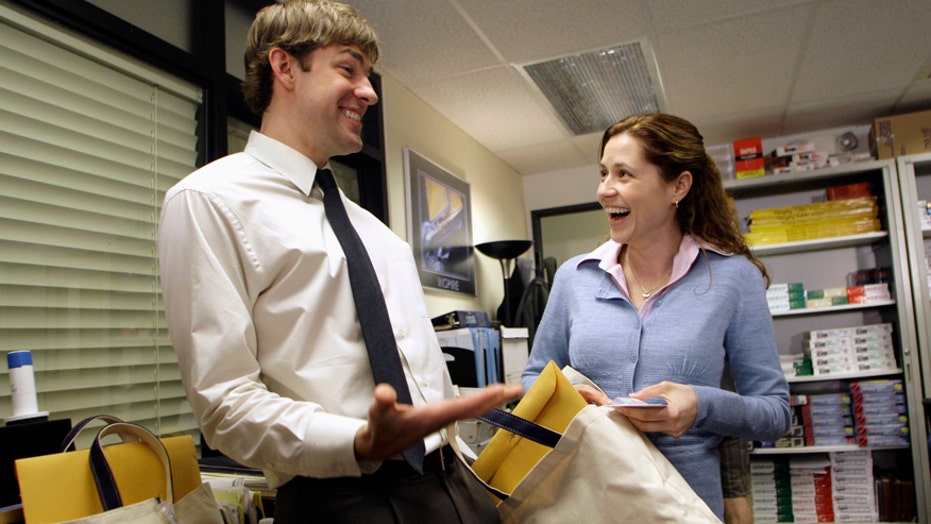 John Krasinski and Jenna Fischer may have played one of TV’s greatest onscreen couples in “The Office” – but in real life, the former costars are split over the Stanley Cup Final.

During Sunday’s Game 6 between the Boston Bruins and St. Louis Blues, Fischer publicly revealed her longtime sports “feud” with Krasinski. The 45-year-old actress, who grew up in St. Louis, said she has sparred with Boston-born Krasinski since their days portraying Pam Beesly and Jim Halpert on “The Office.”

“Let me tell you something, this feud has been going on for a long time between us,” Fischer said. “Because when we were shooting the show, the Red Sox and the Cardinals were in the World Series. And ['The Office' actress] Phyllis [Smith] and I — Phyllis is from St. Louis — we would be in my trailer cheering for the Cardinals. And [Krasinski] had ['Office' actors] B.J. [Novak] and Steve Carell in his trailer cheering for the Red Sox, and they swept us in four games."

“And it is my turn,” the actress continued. “It is my turn to rub it in his face. So let’s go Blues!”

'THE OFFICE' STAR RAINN WILSON SHARES PHOTO OF A NOOSE AT FRIEND'S HOME: 'RACISM EXISTS IN OUR COUNTRY'

Krasinski was quick to respond, joking, “Soooooo... I should invite someone else to game 7?”

The pair have talked trash earlier in the series when the Blues beat the Bruins in Game 5. Fischer tweeted a joke about winning the Stanley Cup, referencing “Office” character Stanley Hudson.

“Uh oh. @johnkrasinski Looks like Pam might be going home with Stanley,” Fischer tweeted. “Who would have guessed!”

“Wow… this is how you wanna play this Fischer?” Krasinski responded. “… ok. Game ON!”

The Bruins and Blues are set to play the winner-takes-all Game 7 on Wednesday.