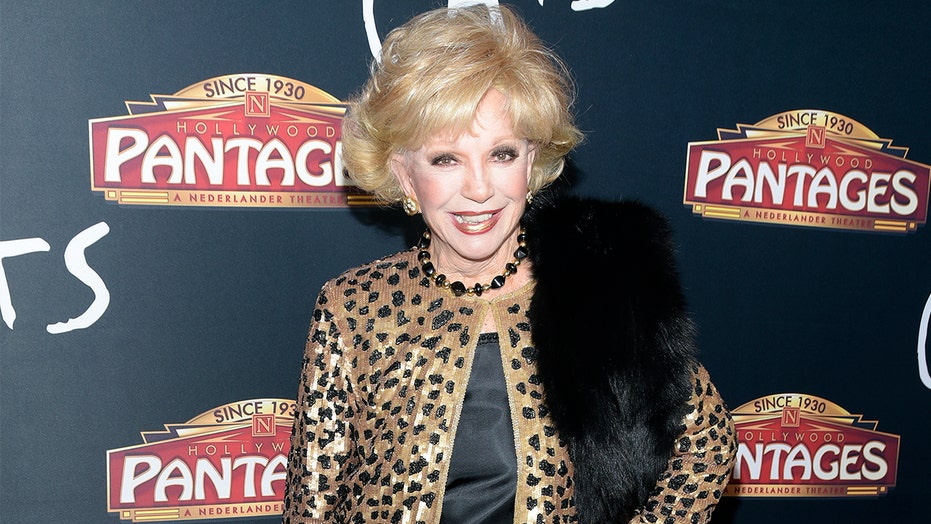 LOS ANGELES – Many performers have a story of an on-set blooper that sticks with him or her throughout the years.

Ruta Lee is no exception.

The actress, who portrayed Ruth Jepson in the 1954 musical "Seven Brides for Seven Brothers," told Fox News there is one that happened during rehearsals for the film that has lingered in her memory.

“I remember one time when we were rehearsing for the first time after six weeks of rehearsal at a studio rehearsal hall, we were allowed onto the platform that was the base of the barn that they were going to build," Lee recalled.

RUTA LEE RECALLS WORKING ALONGSIDE FRANK SINATRA, ALEX TREBEK: 'I LOVED EVERY SINGLE SECOND OF IT'

"They hadn't rubberized our shoes yet and I did a big slide back and fell forward onto my face, hit my head on the planks, went out like a light," she continued. "And our choreographer, Michael Kidd, was the first voice I heard saying: ‘Don't worry. She's all right. She just dropped a quarter down the slot and she’s trying to find it.’

"Do you know how painful it is to be knocked out but laughing?” Lee, 84, joked.

Fortunately, the blunder happened during practice, and not in the midst of the actual production. All the same, she wound up with a goose egg on her head, Her hairstylist had to bring down her bangs to conceal it.

The film has gone on to become a Broadway show but Lee wouldn’t be opposed to seeing it rebooted on the screen.

“I'd like to see it redone, but on the other hand it holds up so beautifully as it is that you don't sit there saying, ‘Oh, what an old-fashioned film.’ It stays young and fresh and wonderful all these years later,” she said.

Lee said one reboot challenge is that so many of the original actors have died.

Ruta Lee being honored with a star on the Hollywood Walk of Fame at Hollywood Boulevard in Hollywood, Calif. in 2006. (Photo by Jason Merritt/FilmMagic)

“I don't even want to talk about it,” she said, with watering eyes. “We were quite a family cause we were together a long time and those were the days when we worked six days a week. We worked Saturdays. We only had Sundays off.”

If she revisited Jepson, Lee knows exactly where her character would be in 2019: “I would be a great grandmother by now, but probably still bossing people around a little bit, which is part of my nature,” she proclaimed.

The actress, who looks fabulous at 84 and doesn’t have a beauty secret to offer up — other than her standard routine of “lots of makeup, water and a bar of soap” — says she’s thankful for her storied career.

“While I've never reached superstardom, I have reached a plateau where I was known and I worked all the time,” she said.

“I'm a triple-threat in that I can work in television, I can work in movies and I can work on the stage. And my most lucrative part of my career was the five years that I spent on Home Shopping Network. That was wonderful!” she exclaimed while attending the Hollywood Museum Celebrates the 55th Anniversary of "Gilligan's Island" event.

Lee does have one big regret: turning down the contract that she was offered at Warner Bros. back in the day.

“They asked me if I'd like to work under contract. Contract players in that day and age were getting like $300 a week and I was guesting almost every other week at Warner Bros. for $750 a week," she said. "And so I said, ‘Gentlemen, thank you, but why would I do that?’"

"While I've never reached superstardom, I have reached a plateau where I was known and I worked all the time."

Still, Lee says things have worked out pretty well for her in the end.

“I still call my little house in Palm Springs ‘the house that Jack meaning Jack Warner built’ because I did so many Warner Bros. shows,” she added with a grin.