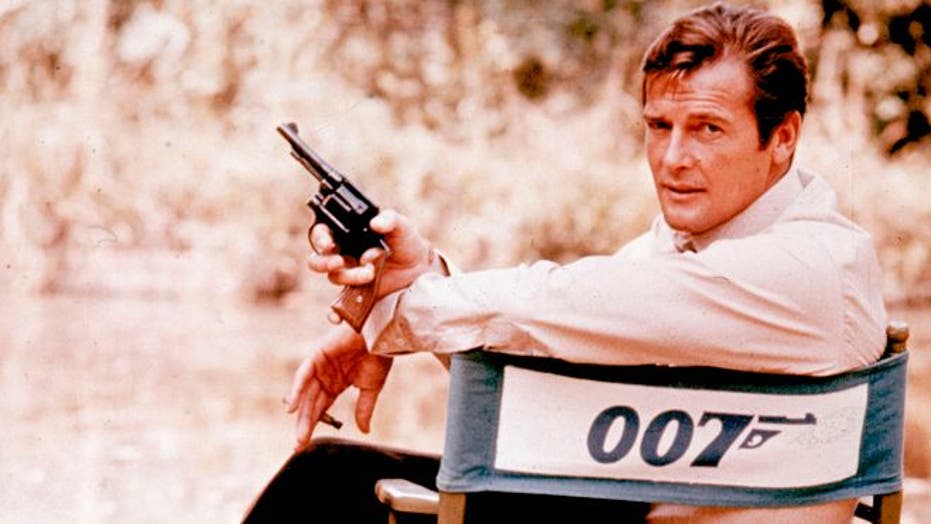 Roger Moore’s son Geoffrey believes his father made the right decision when he walked away from James Bond after 1985’s “A View to a Kill.”

The legendary British actor, who starred as the world’s most famous spy in seven movies, passed away in 2017 at age 89 from cancer.

“He was kissing leading ladies and they were in their 20s,” Geoffrey told UK’s MailOnline on Friday. “Plus, they’d already found a substitute.”

Madeline Smith leaning against Roger Moore in a suggestive manner as he touches her arm in a scene from the film "Live And Let Die," circa 1973. (United Artist/Getty Images)

Timothy Dalton would go on to take Moore’s place as Bond — James Bond.

British star Daniel Craig is currently the latest Bond. His film, titled “No Time to Die,” is expected to be released sometime in 2020. According to the outlet, it will be the 51-year-old’s final appearance as the suave leading man who prefers his martinis shaken, not stirred.

“It’s lasted until now,” said Geoffrey. “It’s the longest living franchise. I don’t think it will go unless a meteor comes crashing down and that’s it.”

Geoffrey Moore attends the World Premiere after party of "Spectre" at The British Museum on Oct. 26, 2015, in London, England. (David M. Benett/Dave Benett/WireImage/Getty)

Geoffrey also shared producer Barbara Broccoli would get his full support if she were to move forward and break tradition by casting a woman in the leading role.

“It would be her idea,” he told the outlet. “And if that were the case I’d definitely back her, and I think the fans would go along with that.”

These days, Geoffrey is determined to keep the legacy that his father created with UNICEF alive. Moore accepted the role of UNICEF Goodwill Ambassador in 1991.

“You can’t really say no to Audrey [Hepburn],” said Geoffrey. “She said, ‘Please come along.’ That’s when she really realized the power of stardom and how she could bring this matter to a wider audience. He didn’t have much to say because he didn’t know much about it, but as a crash course she said, ‘Come and see what I see,’ and he couldn’t stop crying.”

“…So he continued that goodwill program,” Geoffrey said. “Audrey was the founder but she needed a contemporary who had that kind of reach to a wider audience. And he kept it going.”

The outlet revealed Geoffrey has since released a song titled “U.N.I (You & I) which he co-wrote. Production credits went to Chic guitarist Nile Rodgers, actress Naya Rivera and former “Dancing with the Stars” personality Julianne Hough. The song is meant to raise funds for UNICEF in honor of Moore’s memory.

Back in 2018, Moore’s daughter Deborah recalled her final moments with the film icon to UK’s Yours magazine. She insisted Moore never lost his charm, even as he was battling cancer.

Roger Moore never lost his charm, according to his eldest child Deborah Moore (pictured) — not even when he was battling cancer. (Getty)

“Dad was such a kind man and had a wonderful sense of humor,” she said at the time.

“Even when he was in [the] hospital in his last days, he had a twinkle in his eye, and you could see him flirting with the nurses. I’d have to say ‘Dad, behave!’”

Deborah still had fond memories of growing up with the Hollywood star. She described how even when Moore was at the height of his fame, family always came first.

“He’d usually take us on film sets with him when he was working because, being such a family man, he didn’t want us to be split up," she said. "As we were quite young – I was 10 when he got Bond – we were taken out of school for a few months and a tutor would come with us so we didn’t miss out on class. I remember when we went to Jamaica to film Bond – it was all very exciting.”

Moore didn’t think twice when it came to welcoming his children into his star-studded world of filmmaking. But, when cameras stopped rolling, he preferred to dedicate his time to them.

“His favorite thing to do with us when we were young was to take us swimming, especially when we went out to Italy, where my mother was from,” said Deborah. “It was right by the sea, so every morning we’d get up at the crack of dawn together and go out for a swim. It was wonderful.”

Moore also taught his children the importance of giving back to those in need.

“He cared hugely about what was happening in the world and got very upset about injustices, particularly towards women and children,” said Deborah, also an actress..

With the help of UNICEF, the goodwill ambassador traveled the world for over 26 years to champion children’s rights. In 1999, he was made a Commander of the British Empire and was knighted in 2003.

Then in 2012, he raised more than $1 million for the organization by leading a Bond-themed auction. That same year, he received the first UNICEF UK Lifetime Achievement Award.

“He actually turned down a lot of work because of his UNICEF commitments,” said Deborah. “He even used to get a little bit annoyed when he went on talk shows and found it hard to get around to talking about the charity. He’d always come away and say, ‘Oh I wish I’d had more time to talk about UNICEF.’”

And throughout his life, Moore never took his fame for granted, a lesson he was determined to teach his daughter.

“Dad taught me to always be appreciative of what you have,” said Deborah. “In fact, he would never say no to anyone who asked for an autograph. Even if it was at the most inconvenient moment, he’d be so gracious and say yes.

"I remember he once said, ‘These are the people who put me here’ and that’s why he did it. He also taught me that it’s so easy to be kind and so hard to be unkind because he always had so much love and respect for other people. He was such a good man.”