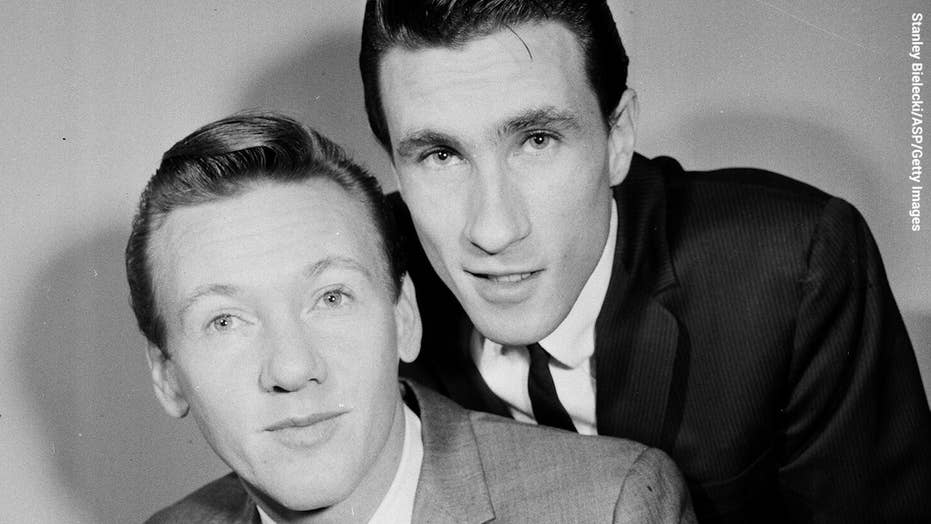 A longtime half of The Righteous Brothers is teaming up with his new singing partner Bucky Heard to offer a limited concert series titled “An Intimate Evening with The Righteous Brothers." Due to the ongoing coronavirus pandemic, which has put numerous concerts with audiences at full capacity on pause, the shows will be presented on a pay-per-view live stream. Listeners tuning in can expect to hear their favorite songs from over the years, as well as the stories behind them.

The Righteous Brothers, which previously featured Medley with Bobby Hatfield, began in the early ‘60s and ruled the charts with hit tracks, such as “You’ve Lost That Lovin’ Feeling,” “Unchained Melody,” and “Rock and Roll Heaven,” just to name a few. Many of their songs became part of iconic soundtracks for films like “Top Gun” and “Ghost.” Their style of music, which leaned heavily on R&B, became known as “blue-eyed soul.”

ROLLING STONES KEITH RICHARDS' DAUGHTER ALEXANDRA RECALLS TOURING WITH LEGEND AS A KID: 'IT WAS EYE-OPENING'

Medley spoke to Fox News about his upcoming performances, what the future holds for live music, what has kept him going over the years, as well as some of the sought-after tales behind his memorable hits.

Fox News: What can fans expect from your limited pay-per-view streaming shows?
Bill Medley: Well, we're doing a lot of the music and telling a lot of the stories. We’ve been hearing from fans and friends that they’re really interested in the stories [behind the songs].

We did one last night. It was great, great fun. We sat down at the piano and did some stuff off-the-cuff. And the stories are really fun to do. I know if I was watching the Eagles or something, I would want to hear how they wrote all those songs. You can go home and just turn on your CD or whatever and listen to them, but to hear the stories, that’s great.

Fox News: What do you think the future holds for live music?
Medley: Well, safety comes first. Everybody should wear their mask. You’ve gotta be careful. This is the real deal. We have a lot of friends that had it and a couple unfortunately passed. And it’s also very difficult for performers to not be able to go out and work because that’s really what we do. It’s who we are. And so not to be able to do that is very tough, but safety first. We’re going to get through this.

I’ve talked to several people about what the world is going to look like when all of this is done. What does it mean for performing? There are two different thoughts. A lot of people are getting used to staying at home and will continue to do so. But some people want to go out and will do so once it’s safe. I think it’s going to be fine. I think entertainment is one of those things you just have to have in your life. And a lot of the music that we’ve done is very important to a certain age group. I think we’re going to get back to that audience experience we’re familiar with once it’s safe to do so.

DOLLY PARTON EARNS FIRST CHRISTIAN NO. 1 FOR ‘THERE WAS JESUS’

Fox News: The Righteous Brothers opened up for The Beatles. What surprised you the most about them?
Medley: Well, The Beatles tour was really interesting. Bobby and I were rhythm-and-blues singers. We didn’t pay much attention to the radio. We got an offer to do the Beatles tour. It was nice that we were offered, but they were just starting to happen, you know. And when we went on that tour, it just all broke loose. I mean, we had a front-row seat to history and didn’t know at the time. But it was remarkable.

And the most remarkable thing about our tour is every night when The Beatles would go on, they would turn all the house lights up. … It was all lit up. I finally asked [Beatles manager] Brian Epstein, “Why are they turning the lights up?” He said, “They’re not. It’s just all flashbulbs.” It was all flashbulbs from kids taking pictures of The Beatles. And it lit the whole stadium up. But it was great to work with those guys. They were wonderful. They were wonderful to us.

Fox News: Does it surprise you that some listeners are still discovering you’re the male singer in “(I’ve Had) The Time of My Life”?
Medley: Every time I say, “I’d like to do a song that I did for the movie ‘Dirty Dancing’ called '(I’ve Had) The Time of My Life'" - I know there are some people out there that are saying, “I had no idea that’s the guy who did it.” But I am that guy and I love doing the song. [laughs] Now I get to do it with my daughter, who was born when “Dirty Dancing” first came out.

OZZY OSBOURNE SAYS HE WAS ‘CALMEST’ IN HIS LIFE, 'PEACEFUL' WHEN HE STRANGLED SHARON WITH INTENT TO KILL

Fox News: When did you realize “Unchained Melody” had become larger than life?
Medley: “Unchained Melody” and “You’ve Lost That Lovin’ Feeling” have had two lifetimes. We recorded that song in ’65, ’66. It began a good hit, maybe No. 5 in the nation or something like that. And then in the ‘80s, they put it in “Ghost.”

It just became bigger than it had ever been. And it’s now one of the biggest things that we do on our show. It’s really remarkable what movies and television can do for your songs. And I thought “Unchained Melody” was perfect for that movie. I mean really, they got the right song. … Kids left the theater and went right into the record store and bought the album and the single.

Fox News: What’s the story behind “You’ve Lost That Lovin’ Feeling”?
Medley: Well, it was written by Bering Mann and Cynthia Weil. Phil Spector called them and said, “I’m going to produce The Righteous Brothers. Would you write a song for them.”… They kind of wrote it as a Four Tops song. It was catchier, but they had me singing higher… I had to keep lowering it because I couldn’t hit that note.

So they kept lowering it and lowering it. And every time they would lower it, Phil Spector would slow it down. And so finally it became … a different record … I told [Bering and Cynthia], “You didn’t write a hit song for us. You wrote a career for us.” And they certainly did. It’s just a great song. [We’re] very proud that it’s ours.

Fox News: What was it like working with Phil Spector?
Medley: I know people are waiting for a horror story or something [laughs] but he was great with us. Bobby and I knew we were very different from the kinds of groups he worked with. He did a lot of girl groups and we're just two street guys, you know. But we had a lot of fun with him at the time. And I learned a great deal just watching him work as a producer. He knew what he was doing and he wasn’t afraid to tell you so.

ANDREW LLOYD WEBBER SAYS HE IS PARTICIPATING IN CORONAVIRUS VACCINATION TRIAL: 'I AM EXCITED'

Ronnie Spector of the vocal trio the Ronettes with Phil Spector while recording in Los Angeles, California at Gold Star Studios in 1963. (Getty)

He worked us really hard. Bobby and I weren’t used to working so hard. But every time he would have us do something or even redo something, it was always better. So I have great respect for him, musically. I’m sorry that his life turned out the way it did. I don’t throw this word around, but I think he was a genius.

Fox News: You were very good friends with Elvis Presley. What’s your favorite memory of The King?
Medley: Elvis was a friend and a fan of The Righteous Brothers since ’63. I remember when he was in Vegas doing shows during the ‘70s, he would call me over and we would just hang out in his dressing room. He was very interested in how I sang and what I do. We both also rode motorcycles so we had a lot in common, other than singing.

I remember he asked me one day to come up and watch him on stage. I went to the back and I remember how the audience went crazy just waiting for Elvis to come on stage. And when he finally did, it dawned on me, “Holy moly, that’s Elvis.” I mean, of course, I knew he was Elvis. [laughs] But he was just a wonderful buddy. You don’t realize he’s that guy too until he goes on stage. But he was so wonderful as a good friend and I’m very proud that I got to know him.

Fox News: Do you remember the last time you spoke to Elvis?
Medley: Unfortunately, I do. I went down to his dressing room to introduce my son, who was about 9 years old. … I opened the door and he looked pretty tired. It was after his show. And we know his history and all that. The last thing he said to me, and I didn’t know if he was talking about me or if he was talking about himself, he said, “Bill, everything’s going to be all right.” And I left. I’m sure he’s all right.

Fox News: When you were inducted into the Rock & Roll Hall of Fame, it was Billy Joel who introduced you and gave a seven-minute speech. What was that experience like for you?
Medley: We knew Billy Joel was a fan. He would come to see us in New York. I remember when I first met him, he looked like a 5-year-old kid. So when we heard that Billy Joel was going to induct us, we were of course very excited because he’s really a fan.

PAUL MCCARTNEY SAID BACKLASH HE RECEIVED FOR THE BEATLES BREAKUP WAS 'HURTFUL': 'I ALMOST BLAMED MYSELF'

When I did a book about seven years ago or something, he was the one who wrote the foreword. But I don’t like calling him a fan. I consider him a great friend and I love him a lot. And he’s an amazing talent. I’m so jealous of those guys who are great musicians, great writers and great singers. I’ve tried all three. [laughs]

Fox News: Bobby Hatfield of The Righteous Brothers passed away in 2003. What has kept you going?
Medley: You mean because I can’t do anything else? [laughs] I am a singer. I’m a one-trick pony. What’s kept me going? It’s the audience. As long as the people show up, I’m thrilled to death. And I’m thrilled to death to be able to go out and do it. Now I have a new partner, Bucky Heard. He’s a little younger than I am. He’s got great energy and he’s just a great guy. He’s an incredible singer. So it’s just fun.

Fox News: Have you ever thought about retiring?
Medley: When people say, “When are you going to retire?” I said, “I have to get a job first.” I’m going to turn 80 in about a week. It’s been a blessing to still go out and perform. And my voice has been holding up good. My partner’s real good. So I have to try and keep up with him. [laughs] But I think people need music and performance. I think it’ll all be fine when it all calms down.

Bill Medley (left) says he has no plans to slow down. (Photo by Gems/Redferns/Getty)

KC AND THE SUNSHINE BAND ON NEW SINGLE ‘PUT A LITTLE LOVE IN YOUR HEART’: ‘THAT’S WHAT WE ... NEED THESE DAYS’