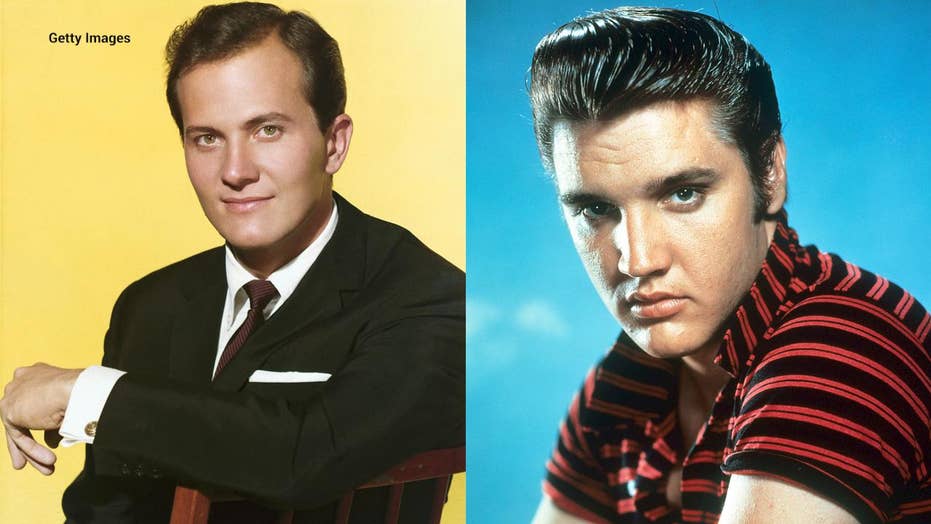 “Bill Randle met me at the airport and said that a new kid would be going on [before me],” the 86-year-old recalled to Fox News. “I said, ‘Is it anybody I know?’ He said, ‘No, you wouldn’t have heard of him. Name’s Elvis Presley.’ I said, ‘Really? I’ve seen his name on a jukebox in Dallas, but he’s a hillbilly, he’s country.’ He said, ‘Yeah, he’s known as a rockabilly down South and he’s on a show called ‘Louisiana Hayride’ once a week.’”

According to Boone, Presley at the time was singing “hillbilly songs with kind of a rock beat,” which intrigued him. But when he finally got to meet him backstage, Boone was stunned by what he saw.

“He was just a scared young kid,” he recalled. “He had not had a hit record yet…. He was with two or three of his buddies. His collar was turned up, his pants were long. He was wearing scuffed up white shoes like me, white bucks… I told him, ‘Bill Randall thinks big things may be ahead for you.’ [He said], ‘I don’t know about that, but I hope so.’ And he just leaned back against the wall and his buddies closed in around him. I thought to myself, ‘Wow, he’s nervous. He may mess up out here in front of these 3,000 kids.’”

But Boone was impressed by Presley’s unique look. Unlike the star, who was famous for his squeaky clean image, Presley had already embodied a bad boy persona before fame.

“He sorta looked like the guy that their moms didn’t want them to associate with, ‘cause he looked like the rebel at school that wasn’t on the sports team and wasn’t concerned about grades, maybe had a pack of cigarettes rolled up under his sleeve and laughing at the guys that were taking school seriously,” Boone explained.

The first song Presley performed was “Blue Moon of Kentucky,” a bluegrass track by Bill Monroe. For that song, Boone said the audience “gave him a nice hand.” But his second was “That’s Alright (Mama),” which is now recognized as his official debut single -- and it really rocked the house.

“They loved it and wanted more,” Boone recalled. “But that’s all he had on his record, both sides. Those two songs. So he left. I came on. I sang my three hits at the moment. I got all the screams that night and it’s the last and only time we ever appeared together [on stage].”

Boone said the two men became good friends and their friendship lasted over the years even as Presley skyrocketed to fame as “the King of Rock ’n’ Roll.”

“[We were] two boys from Tennessee,” he said. “We both rented homes in Bel Air. We were both filming movies at 20th Century Fox at the same time. And we had dinner together. We played tag football with some of my buddies like Ricky Nelson and others. We were just two lucky kids from Tennessee loving it.”

Boone said the last time the two crossed paths was July 1977, a month before Presley’s sudden death. Boone, along with his wife and four daughters, were doing a family act together and heading to Orlando from Memphis.

PRISCILLA PRESLEY SPEAKS OUT ABOUT GRANDSON BENJAMIN KEOUGH’S DEATH: ‘THE DARKEST DAYS OF MY FAMILY’S LIFE'

“The airport was all abuzz because Elvis was about to fly to Las Vegas and his Cadillac limo was out on the tarmac and he was waiting to get on until the last second ‘cause he was still nervous about flying,” he said.

“We waited at the gate for him to get out of the car and come up,” Boone continued. “He came up, we talked a few minutes, took a picture -- I’ve got a picture of that meeting. And he looked like he gained weight, which he had. I smacked him on the stomach and said, ‘Are you carrying your money in here or what?’ He said, ‘Oh I’ve been eating too good, boy. I’ll sweat it off in Vegas.’”

When Presley learned Boone was heading to Orlando instead of Sin City, he had one message that would stay with his pal.

“He said, ‘You’re going to Orlando? That’s the wrong way man,’” Boone recalled. “He turned to his buddies… and said, ‘This man is always going the wrong way.’ And I said, ‘It depends on where you’re coming from.’”

PRISCILLA PRESLEY OPENS UP ABOUT ELVIS' FINAL DAYS: WE 'DIDN'T SEE IT COMING'

On Aug. 16, 1977, Presley was found unconscious in his Graceland mansion and rushed to the hospital, where he was pronounced dead, according to History.com. He was 42, the same age as Boone.

At the time, Boone was at a barbershop in Pittsburgh while in town to perform with his family.

“Some guy came running in saying Elvis Presley died,” Boone recalled. “[I said], ‘What? Get out of here, that’s a terrible joke.’ But it was real.”

“To think that he would die a month later [after our last conversation] was incomprehensible,” Boone added.

By the mid-‘70s, the star was in declining physical and mental health. He was faced with a dangerous dependence on prescription drugs, as well as an addiction to junk food. In 1973, he and his wife Priscilla Presley divorced. In the last two years of his life, Presley made erratic stage appearances and lived nearly as a recluse, History.com noted.

PAT BOONE RECALLS SHOCKING THE CHRISTIAN COMMUNITY WITH HEAVY METAL ALBUM: 'IT WAS A BIG OVERREACTION'

Doctors said Presley died of a heart attack, likely brought on by his addiction to prescription barbiturates.

Today, Boone is still pursuing his love of music. Whenever Presley comes to mind, he still thinks of “the scared young kid” with big dreams to make it big -- the same ones he had.

“I thought back to our conversation,” Boone added. “He said, ‘Boone, you’re always going the wrong way.’ I said, ‘Elvis, it depends on where you’re coming from.’ As I say, we lived our lives differently, but we had a lot in common as well.”