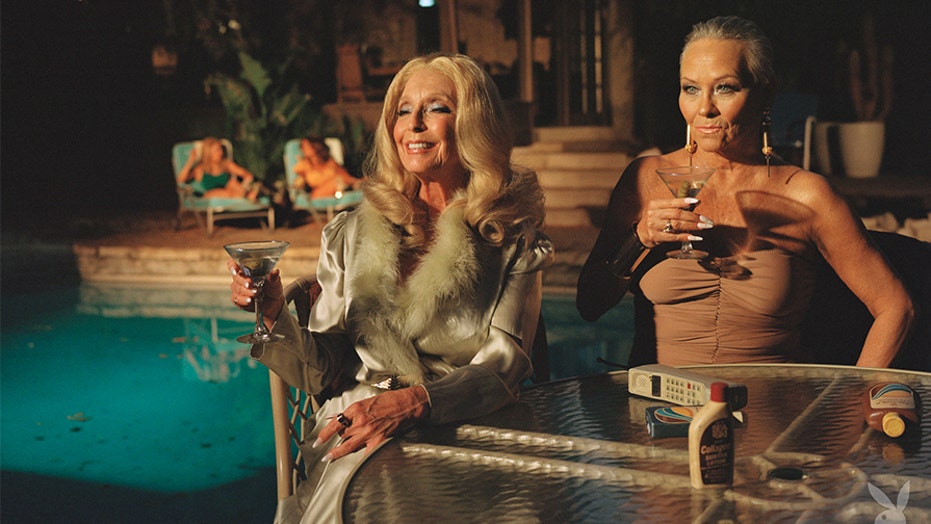 At age 65, Candace Collins Jordan is stripping down for Playboy again.

The model recently joined several veteran Playmates of different ages and races in the magazine’s ’70-inspired “Once a Playmate, Always a Playmate" cover photoshoot, representing the magazine’s first-ever equality issue.

The Southern Illinois native previously became a Playmate in December 1979. Before then, she was a Bunny at the Playboy Club in St. Louis in 1973. Since then, Jordan was a nine-time cover girl.

Candace Collins Jordan was a Bunny at the Playboy Club before she became a Playmate. (Photo courtesy of Playboy.)

Nearly 800 women have been named Playboy Playmates -- with Marilyn Monroe being the first to receive the title -- since Hugh Hefner founded the magazine in 1953, People magazine reported. Hefner passed away in 2017 at age 91.

Jordan spoke to Fox News about living in the Playboy Mansion, how Hefner managed to impress her, working alongside Tom Cruise in “Risky Business,” and why she wouldn’t mind stripping down again.

Fox News: How did you end up becoming a Bunny in 1973?
Candace Collins Jordan: I had a scholarship for St. Louis University, but I had really burned myself out of school. I tried going to college for like a New York minute. I hated it. A girlfriend at the time told me they were hiring at the St. Louis Playboy Club and I should go try it out. So I did. Even though I wasn’t old enough to serve drinks at that time, I got the job.

I worked at the gift shop and I absolutely loved it. Shortly after that, I did a pictorial for "Best Bunnies." Then I was called up to the main hub in Chicago and they asked me to move into the [original] Playboy Mansion where Hef was in residence. I would also be given the chance to work at the Chicago Playboy Club. I absolutely jumped at the chance. I drove all the way there. It was like Dorothy entering the Land of Oz. I had never been to Chicago before and it was so thrilling. I pulled up to this beautiful mansion. The butler opened the door – I felt like I was home.

Fox News: What was it like becoming a Playmate in 1979?
Jordan: I had posed for a lot of ads in the magazine prior. So I already had a lot of experience with all of the photographers that worked there. I remember they said, "Let’s test for Playmate." I said fine. I went up there and it was just one test.

Hefner loved it, and the rest is history. I’ve done a lot of covers for the magazine since then. Three years ago, they revisited me for a cover remake of my February ’79 cover. So this is the second time in 40 years that they have come back to say hi. I told somebody that I would be ready when I’m 80 if they wanted to reshoot.

Fox News: How was it living at the Playboy Mansion?
Jordan: It was a magnificent property. It was situated at the heart of the Gold Coast [in Chicago]. Hefner had impeccable taste. Very traditional – dark wood, beautiful antiques, marble busts – it was absolutely beautiful. There was a swimming pool downstairs where you would slide down a fire pole. It was a clear glass front so the people in the bar below can watch the girls swimming underneath the water.

There was a bowling alley, 24-hour butler and maid service – and it cost $50 a month to live there. You were invited to every party that Hefner hosted. Any star that passed through this city was there. They all wanted to go to the Playboy Mansion. So you got to see the best of the best. For a young girl my age, I really took it for granted when I was living there. … It was history-making. It was the golden age of Playboy and there I was, in the middle of it. It was really special.

Candace Collins Jordan getting ready to pose for Playboy in 2020. (Photo courtesy of Playboy.)

Fox News: You previously described how posing for the magazine was a feminist move. How?
Jordan: It was a chance to make your own decisions. I’ve had so many arguments with many so-called feminists who think Playboy exploits these women in the magazine and it’s so horrible. But the fact is, every single girl that’s in that magazine was thrilled to be there. And it was their own choice to say yes to the offer. That’s the true definition of feminism – the ability to make your choices. I, along with the rest of the Playmates I know, felt the same way.

Fox News: How would you describe your relationship with Hugh Hefner?
Jordan: It was a loving, loving relationship. He’s such a quiet presence, but he’s got such a strength about him. And all the years that I knew him, he had the most amazing sense of humor and the most respect for women. There are so many things he has done that people just don’t know.

When these [centerfolds] found themselves in trouble years and years later, he’ll quietly send them a check to help them out. He was the poster child for the perfect gentleman. I hate how people say all these negative things about him, like pornographer and all of this bull. That was totally not the case. He was so much more than a publisher of a magazine. He was a human rights activist, he was supportive of the LGBT community – he was actually one of the first to champion them. He was just amazing and a wonderful, wonderful presence in my life.

Fox News: What’s your favorite memory of Hugh Hefner?
Jordan: When I first moved into the mansion … there was a little handwritten note that slipped under the door. I still have the note actually. It says, "Candace, Hef would like to invite you down for cake and ice cream for his birthday."

It was like a little teenage boy inviting people to come to his birthday party. And all the girls got a little note slipped under their doors. I thought that really epitomizes his whole personality. As important as he was, he was still just a little kid at heart. And he always had that boyishness around him.

Fox News: Is it true you appeared in the film “Risky Business”?
Jordan: I did! I like to say I started Tom Cruise on his career. [laughs] First of all, he’s as cute as a button, of course. But a lot of those iconic scenes in that movie? He came up with them himself. I mean, he was a genius at filmmaking from such a young age.

I became friends with him and Rebecca De Mornay. So they would let me hang out and watch the scenes. And the things that he would come up with! I mean, he would go off-script, create his own dialogue. He made the movie. He absolutely made all the big parts of that movie – those were all his ideas.

Candace Collins Jordan on the beach, circa 2020.

Fox News: How does it feel to be a part of Playboy’s equality issue at this point in your life?
Jordan: It’s incredibly exciting. This is 40 years after I posed for my centerfold. I’m telling you, once I stepped onto the set, it was as if I never left it. I’ve been doing some acting in Chicago on and off, all the while that I’ve been involved with Playboy.

So being in front of the camera is nothing new to me. But going back and reuniting with my Playmate sisters? That was probably one of the biggest thrills for me. We are truly a family. And when they say "once a Playmate, always a Playmate," there are no truer words Hefner has ever spoken.

Fox News: What’s the difference between posing then and now?
Jordan: It’s about 20 pounds I would say. [laughs] I was 25 when I posed for the centerfold. I was very confident in my own skin. I had no qualms whatsoever about posing nude for the magazine. It was never a concern with the photographers. Playboy always made sure they were the most top-notch.

But you know, I did worry about going back after all this time. I knew that some of the girls I’d be shooting with would be decades younger than me. But you know, I work out. I take care of myself. And I felt really confident when I went out for the photoshoot. I guess the major difference is that I have a lot more confidence now than I did when I was younger. The fact that I might be a few pounds heavier offsets the fact that I have confidence. And I think it’s more exciting now than it was back then, to be honest.