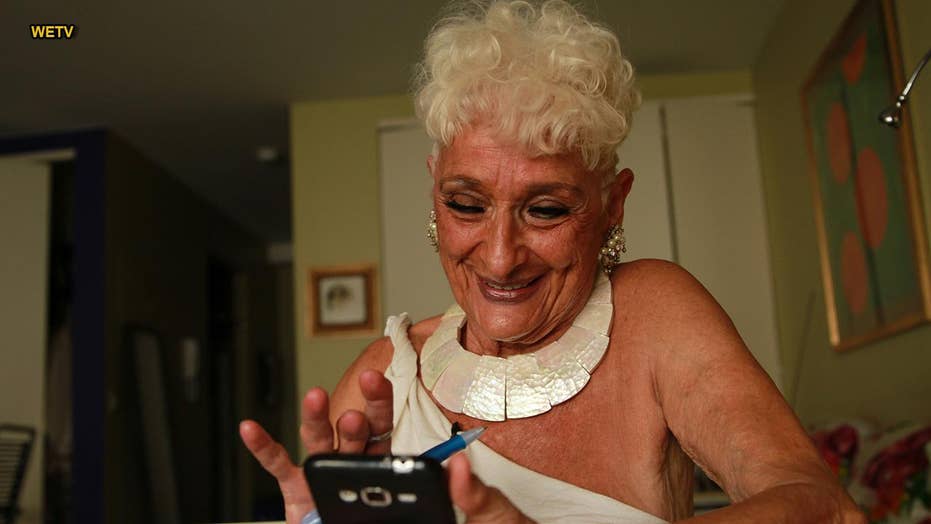 'Tinder Granny' explains why she's quitting dating app for love in doc: 'I'm really out there and desirable'

At age 83, Hattie is no longer on the prowl for one-night stands.

The grandmother of three, famously nicknamed “Tinder Granny” for her voracious appetite for younger men and love of swiping right to prospective suitors, is the subject of WETV’s reality show "Extreme Love,” which explores how traditional ideas of love are being reimagined. She previously appeared in the 2012 documentary “Extreme Cougar Wives.”

“I never considered what I do to be extreme,” Hattie told Fox News. “However, I do value love and I align love and sex. They’ve been together very happily for a long time.”

But before Hattie was an amorous bachelorette, she was a hands-on wife and mother who found herself single in her 50s.

Hattie, known as "Tinder Granny," has vowed to ditch the hook-up app and find her one true love.  (Marcus Cooper/Barcroft Media/Getty Images)

“I was married for 25 years,” she explained. “And that was love and sex combined. Then, I thought I’d get married and do the whole thing all over again, but it didn’t happen. And so, I realized I missed making love… so I put an ad in the paper. Of course in those days, we didn’t have the internet… I was 55.

“I would [tell the men] ‘Listen, I’m going to see you. Within a moment, I’m going to know if I want to go to bed with you.’ … I’m much more discerning. If I’m not turned on immediately, I’m not going to go to bed with them. But if I am, [I’ll] say, ‘Let’s go up to my apartment.’ [I] always have clean sheets, nice lighting and good perfume.”

But being happily single wasn't always so simple. In fact, Hattie admitted it took some time to get acquainted with modern dating after being off the market for decades.

“Men will say what they think you want to hear,” she explained. “A man won’t say, ‘This is a one night stand,’ or ‘I’m going to ball and then I’m leaving and I’ll never see you again.’ But I realized that that is what happens.

Hattie said she could easily get carpal tunnel answering her messages on Tinder. (WETV)

“If it does, then I have learned not to agonize over it. I call that giving yourself a heartectomy, meaning you separate those feelings of, ‘I’m in love,’ or ‘This is so glorious’ — you separate that from below the belt. And then you date like a man. That’s what I finally learned, so I don’t agonize like the woman I used to be, who was yearning.”

Hattie said she first downloaded Tinder in an attempt to find a long-term lover. And requirements for the sultry senior were specific: No one over 50 and no one under 35 or 30, depending on the day. When asked how many conquests she’s has had, Hattie responded, “I don’t carry a calculator.”

Still, Hattie reportedly hooked up with a man as young as 18. And according to Hattie, plenty of men in their 20s were eager to experience what it was really like to spend the night with an older woman.

“They’re not thinking they’re going to marry me and have children and send the children to Hebrew school, all the shots for the kids and the babies and the diapers,” said Hattie. “They’re not thinking of a life. I had that life for 25 years… [There are] guys in their 20s who want the experience of an older woman… It’s like a prize. They’re right.”

The mother of two, and grandmother of three, divorced in her 50s and has spent nearly 30 years on the dating scene — but as she's got older, the men she dates have gotten younger. (Marcus Cooper/Barcroft Media/Getty Images)

Not only is Hattie's daughter aware of the escapades, but she has also been supporting the matriarch to share her wisdom of feeling young on reality TV, as well as demystify the notion that a man wouldn’t be captivated by a woman her age.

“Most women past menopause, they don’t exactly recall their younger years in which their hormones were raging,” said Hattie. “And so they think it’s a thing of the past. I don’t really try to make older women get sexual again. If they’re not, they’re not. I’m not competing with them. But younger women want to look at an older woman and say, ‘… I want to be like her. I want that.’"

“Because I’m really out there and desirable… then it’s putting out a message — love whom you love,” added Hattie. “Don’t be critical. Don’t be judgmental. Allow people to love each other with dignity and integrity. That’s all. It’s balancing. There’s more of us and more of them.”

Despite Hattie’s success rate and high demand, she’s now no longer on Tinder. The reason? She’s now ready to settle down with one partner.

“I’m publicizing the fact that I am going to hold out for what I really want, which is one lifemate,” she explained. “And I felt that if I just keep saying yes to young guys and spend the rest of my life a walking yes, that’s what I’m going to get.”

“I am praying — I can say that it’s important to me — for the person who I can cherish, adore, love, and they feel the same about me,” she said. “Now, if God, the universe, grants me that, I will be beautifully grateful and blessed. And if not, maybe I’ll have to think of the afterlife.”