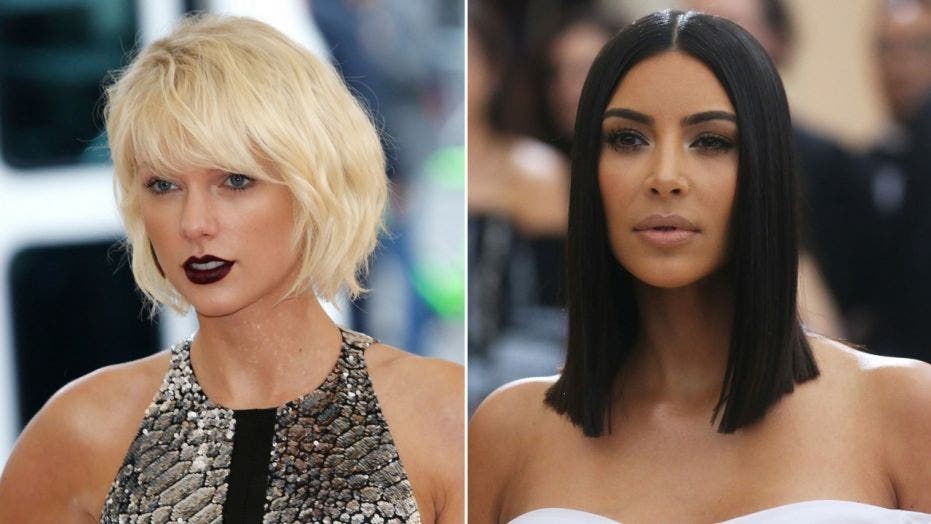 Kim Kardashian fired back at Taylor Swift after the singer took a jab at the reality star’s husband, Kanye West.

A newly leaked video clip of the entire four-year-old phone call between the rapper and pop superstar about his controversial song "Famous" made its way online over the weekend. It seemingly proves that Swift was telling the truth when she said that West never ran the lyric “I feel like me and Taylor might still have sex, Why? I made that b---- famous” by her in its entirety.

“Instead of answering those who are asking how I feel about the video footage that leaked, proving that I was telling the truth the whole time about *that call* (you know, the one that was illegally recorded, that somebody edited and manipulated in order to frame me and put me, my family, and fans through hell for 4 years)…SWIPE UP to see what really matters,” Swift wrote on her Instagram Story Monday in reference to the leaked video.

The link revealed that Swift has been donating to the World Health Organization and Feeding America in the midst of the ongoing coronavirus pandemic and encouraged her fans to do the same.

Leaked audio from their 2016 call seemingly proves that Taylor Swift was telling the truth about Kanye West not running a crucial lyric by her for his song 'Famous.' (Getty)

Four years ago, Kardashian posted a clip of the phone call between her husband and Swift to prove that he did indeed run the lyric by her. However, the full video shows that the main point of contention, the use of the word “b----,” was never mentioned.

After Swift’s Instagram jab, the “Keeping Up With The Kardashians” star defended herself and her husband in a series of tweets.

“.@taylorswift13 has chosen to reignite an old exchange - that at this point in time feels very self-serving given the suffering millions of real victims are facing right now,” Kim began her statement. “I didn’t feel the need to comment a few days ago, and I’m actually really embarrassed and mortified to be doing it right now, but because she continues to speak on it, I feel I’m left without a choice but to respond because she is actually lying.”

Kardashian noted that she never denied that the word “b----” wasn’t mentioned in the phone call. Her issue seemed to be that Swift was implying Kanye never called her to discuss "Famous" at all.

“To be clear, the only issue I ever had around the situation was that Taylor lied through her publicist who stated that ‘Kanye never called to ask for permission…’ They clearly spoke so I let you all see that. Nobody ever denied the word ‘b----’ was used without her permission,” Kim continued. “At the time when they spoke the song had not been fully written yet, but as everyone can see in the video, she manipulated the truth of their actual conversation in her statement when her team said she ‘declined and cautioned him about releasing a song with such a strong misogynistic message.’ The lie was never about the word b----, It was always whether there was a call or not and the tone of the conversation.”

Kim also took issue with Swift’s implication that she doctored the clips she released on Snapchat four years ago.

“I never edited the footage (another lie) - I only posted a few clips on Snapchat to make my point and the full video that recently leaked doesn’t change the narrative,” Kim wrote.

She concluded by defending Kanye’s right to record and document the process of creating an album.

“To add, Kanye as an artist has every right to document his musical journey and process, just like she recently did through her documentary,” Kim wrote. “Kanye has documented the making of all of his albums for his personal archive, however has never released any of it for public consumption & the call between the two of them would have remained private or would have gone in the trash had she not lied & forced me to defend him.”

The reality star ended by apologizing for having to speak about this four-year-old feud at all.

“This will be the last time I speak on this because honestly, nobody cares,” she wrote. “Sorry to bore you all with this. I know you are all dealing with more serious and important matters.”

Swift has not directly responded to Kim’s Twitter thread. However, her publicist Tree Paine took to Twitter to refute Kim’s claim that she lied about the initial phone conversation.

“I’m Taylor’s publicist and this is my UNEDITED original statement. Btw, when you take parts out, that’s editing,” she wrote. “P.S. who did you guys pi-- off to leak that video?”

The original statement shared by Swift’s publicist reads: “Kanye did not call for approval, but to ask Taylor to release his single ‘Famous’ on her Twitter account. She declined and cautioned him about releasing a song with such a strong misogynistic message. Taylor was never made aware of the actual lyric, ‘I made that b---- famous.’”

This new footage in question was posted online from an unknown source late Friday night and rapidly spread across social media. Unlike other videos previously posted of the call, it shows all 25 minutes, albeit chopped up.

In the video, West tells Swift he's working on a song and wants to use the lyric: "I feel like me and Taylor might still have sex." But he is not heard telling her the line, “I made that b---- famous.”

In response, Swift is heard saying: “I’m glad it’s not mean though. It doesn’t feel mean, but like, oh my God, the build-up you gave it. I thought it was gonna be like, 'that stupid dumb b----,' like, but it’s not.”