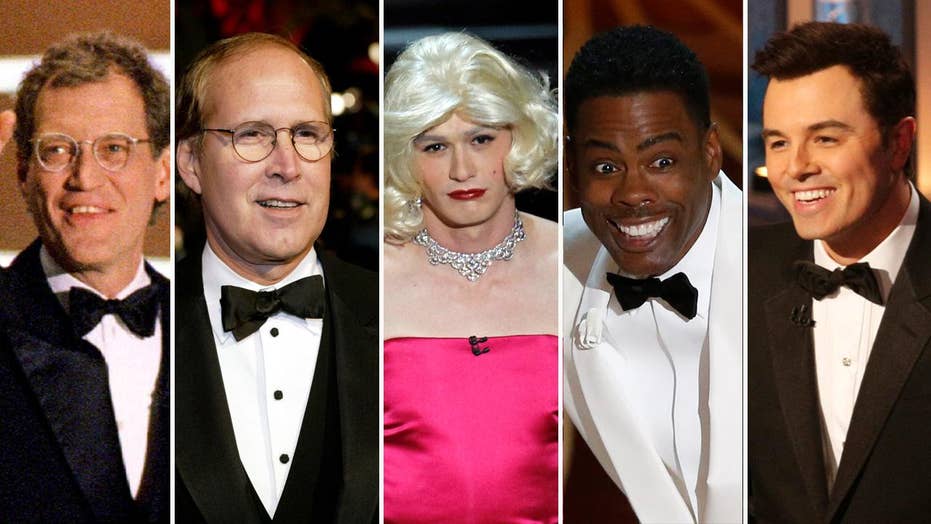 With Oscars season here, take a look at some of the most controversial hosts from Seth Macfarlane to Chevy Chase.

Celebrities can rehearse for the Oscars all they want, but when the big night finally arrives and the cameras start rolling, no one is completely prepared.

Sure, the hosts have their one-liners ready, presenters have minute-long spiels memorized and performers know exactly where to stand on stage — but that doesn't mean everything always goes according to plan. At least, that's what history has taught us.

The Academy Awards has had its fair share of flubs over the years. From the jaw-dropping envelope mixup of 2017 to the shocking stage streaker of '74, here's a look at some of the moments that have rocked Hollywood's biggest night.

Presenter Faye Dunaway made a massive mistake at the 89th Academy Awards when she awarded the best picture Oscar to "La La Land" instead of its actual winner, "Moonlight."

The official accountant of the Oscars, Price Waterhouse Coopers, took responsibility for the mistake, saying they handed Dunaway the wrong category envelope.

Warren Beatty, who had presented the award with Dunaway, took the microphone to explain the mix-up.

"I opened the envelope and it said Emma Stone, 'La La Land.' That's why I took such a long look at Faye, and at you," Beatty told the crowd amid the confusion on stage. "I wasn't trying to be funny."

Beatty and Dunaway are reportedly getting a second chance to present the award this year — this time, with a redesigned envelope with the category printed in bold letters on both sides.

John Travolta turned heads when he butchered "Frozen" star Idina Menzel's name while introducing the artist ahead of her performance of "Let It Go" during the 2014 Academy Awards.

"Please welcome the wickedly talented, one and only, Adele Dazeem," Travolta announced. And the internet was buzzing.

A year later, the actor explained what happened on Jimmy Kimmel Live.

Travolta said he had been waiting backstage when a page grabbed him and said he had one minute and 15 seconds until it was time to present.

"I said, 'Really? What happened to 15 minutes?'" Travolta recalls asking the assistant.

At the time, Travolta said he was admittedly starstruck by actress Goldie Hawn, who was also backstage, when the page informed him that they changed Menzel's name to the phonetic spelling.

"So I go out there and I get to her thing and in my mind I was like, 'What? What is that name? I don't know that name,'" Travolta explained. "I didn't rehearse it that way."

2013: Jennifer Lawrence versus the stairs

Upon receiving the prestigious best actress award for her role in "Silver Linings Playbook," an elated Jennifer Lawrence made her way to the stage to claim her trophy — but not without fail.

As she approached the steps in a massive white dress, Lawrence tripped up the steps and collapsed to her knees, to which a worried Hugh Jackman (who was sitting beside the stage) ran over to assist the fallen actress.

Lawrence made light of her tumble, however. When she made her way to the microphone, she jokingly addressed the crowd and stated, "You guys are just standing up because you feel bad that I fell and that's really embarrassing, but thank you."

There was a race to the microphone when "Music By Prudence" was announced the Academy Award winner for best documentary short.

The short's director, Roger Ross Williams, was in the lead. He made it to the stage and began thanking his cast and crew when he was suddenly pushed aside by producer Elinor Burkett.

"What happened was the director and I had a bad difference over the direction of the film that resulted in a lawsuit that has settled amicably out of court," she told the site. "But there have been all these events around the Oscars, and I wasn't invited to any of them. And he's not speaking to me. So we weren't even able to discuss ahead of the time who would be the one person allowed to speak if we won."

The producer also claimed Williams' elderly mother used her cane to block her as she made her way to the stage that night.

Talk about cutting to the chase.

That's exactly what Olivier did when he presented the award for best picture during the 1985 Academy Awards. Instead of naming each nominee, the presenter simply tore the envelope open and announced, "Amadeus!"

Olivier turned around, realizing he made a mistake — but at that point, it was too late and the cast of "Amadeus" was already making their way to the front.

The ‘70s was a wild time, especially at the Oscars.

It was the decade Robert Opel--an American photographer, art gallery owner and gay rights activist--ran across the stage in the nude during the 1974 show. The crowd erupted into cheers as co-host David Niven turned around in shock.

"Well, ladies and gentlemen, that was almost bound to happen," Niven commented with a grin. "But isn’t it fascinating to think that probably the only laugh that man will ever get in his life is by stripping off and showing his shortcomings?”

Sammy Davis Jr. had his own embarrassing moment on the Oscars stage when he was handed the wrong envelope during the 1964 ceremony.

The audience applauded, but no one stood up. Davis Jr. quickly rushed back to the microphone to announce he had made a mistake.

“They gave me the wrong envelope,” Davis Jr. told the crowd. “Wait till the NAACP hears about this.”

The actual winner was Andre Previn for “Irma La Douce.”

Actress Alice Brady was nominated for best supporting actress in 1938 for her role in “Old Chicago.” Unfortunately, the actress was too sick to attend the event.

So, when her name was announced as the winner, a man stepped in to accept the award on her behalf. The problem: No one knew who he was.

He walked off with the trophy and was never seen again.

“It has never been recovered and the imposter could never be tracked down,” according to Brady’s IMDb profile. “Before the Academy could do justice and issue a copy of the award, Alice Brady passed away.”

However, it appears Brady's mishap may not entirely ring true. While the award-winning actress was reportedly at home due to a broken ankle, Forbes reported that Henry King, the director of "Old Chicago," actually stepped in to accept the award in her place. A newspaper later discovered at the Academy's Margaret Herrick Library that King even brought the trophy to her home later that night, according to the report.