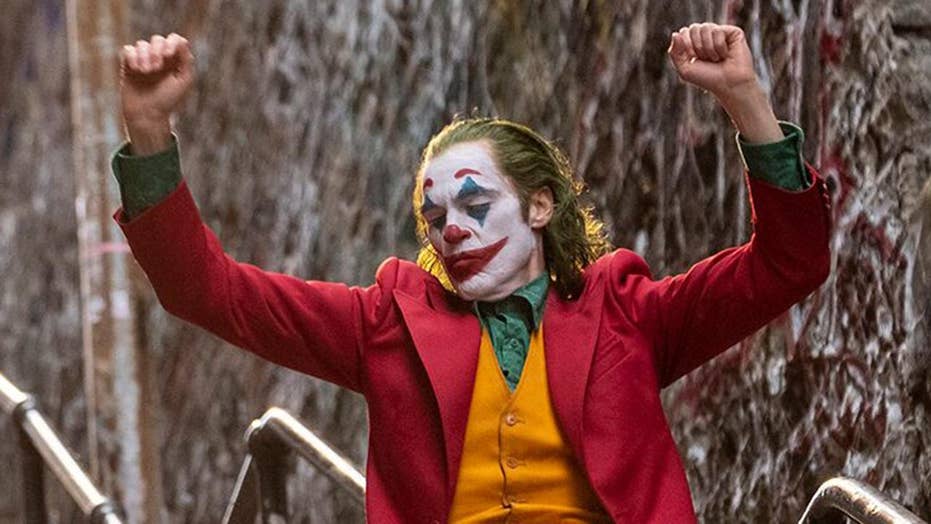 'Joker' now yours to own

New in Entertainment: The first R-rated billion dollar blockbuster hit is yours to own with the 'Joker' now available for purchase.

CNN has labeled the Oscar-nominated blockbuster "Joker" as "controversial" over past concerns that it could "potentially" incite violence despite the film no longer having a strong presence in theaters.

"Joker" has been nominated for 11 Academy Awards, and Joaquin Phoenix, who plays the titular comic book villain, is a heavy favorite to pick up his first Oscar for Best Actor next month.

However, ahead of Sunday's Screen Actors Guild Awards, where Phoenix is also expected to be honored, CNN aired a segment that hyped the so-called "controversy" that surrounded the film.

"The Screen Actors Guild Awards are Sunday with the controversy over the movie 'Joker' could once again be ignored," CNN anchor Brooke Baldwin introduced Friday's pre-taped segment.

The segment began by laying out how "Joker" could be "getting the last laugh" this awards season. The tone of the segment then changed: "Only months ago, some critics argued the film could inspire violence" and featured interviews with the parents of a victim of the 2012 Aurora mass shooting, where a gunman dressed up as the Joker murdered moviegoers at a midnight screening of "The Dark Knight Rises."

"The more I read, the more upset I got," Sandy Phillips, whose daughter died in the Aurora massacre.  "How are other survivors of not just Aurora but of gun violence going to react to being triggered again?"

The Hollywood Reporter's award columnist Scott Feinberg told CNN that if "another incident" was inspired by the iconic character, it could prevent folks in Hollywood from "elevating" the film with their award votes.

Joaquin Phoenix accepting the award for best actor in a motion picture drama for his role in "Joker" at the 77th Annual Golden Globe Awards. (Paul Drinkwater/NBC via AP)

"Instead of inciting violence, you invited the audience in to see what it feels like when you're one of the forgotten," Phoenix told "Joker" director Todd Phillips during his acceptance speech.

"Joker," which has made over $1 billion at the worldwide box office, only appeared in 85 theaters and made roughly $59,000 last weekend, according to Box Office Mojo. The film has already been released on Blu-Ray and on-demand. However, "Joker" is set to return to approximately 800 theaters for a limited run from Jan. 17-24 due to its award season success.

Friday was not the first time CNN sounded the alarms on "Joker." Last October, CNN's website published an opinion piece arguing that the popularity of the film validates the "white-male resentment" that helped President Trump get elected.

CNN writer Jeff Yang described the title character, whose real name is Arthur Fleck, as a "middle-aged, working-class man" who is "brutalized by young thugs" and "beaten by suit-clad Wall Streeters," adding that the Batman villain's "answer to this dual pincer of oppression by people of color and one-percenters is a murderous rampage of revenge, which catches fire among fellow angry citizens of Gotham and sends them looting through the streets."

"While many reviewers have focused on Fleck as an 'incel' hero -- his status as a sexless loner who turns to violence -- the true nature of the movie's appeal is actually broader: It's an insidious validation of the white-male resentment that helped bring President Donald Trump to power," Yang wrote.

Yang elaborated that "Joker" is really about the "forgotten man," which he described as the "metaphoric displaced and disenfranchised white man whose goodwill has been abused and whose status has been reduced. A man who has been crushed underfoot by the elite, dragged down by equality-demanding feminists and climbed over by upstart nonwhite and immigrant masses."

The CNN opinion writer also charged director Phillips of wanting to "yank at the chains of a society" after the "Hangover" filmmaker slammed the outrage culture he suggested was killing comedy last fall.

"After watching 'Joker,' it's easy to decode what Phillips really meant  ... Yang continued. "It draws from the same well of resentment that Trump strums with his racist rhetoric at his rallies -- the fear of no longer being at the center of the political, social and cultural universe, with everyone who isn't you positioned at its perceived edges."