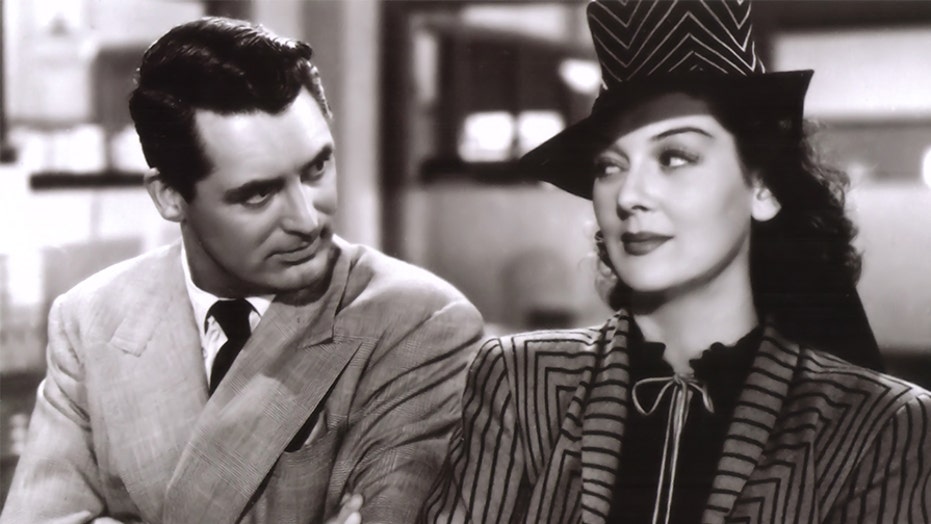 Rosalind Russell took a huge risk when she accepted a role that would forever change her Hollywood career.

The character was that of the alluring, fast-talking Hildy Johnson in 1940’s “His Girl Friday.” The movie, which was directed by Howard Hawks, told the tale of a newspaper editor who uses every trick in the book to keep his star reporter ex-wife from remarrying.

While the movie starred a suave Cary Grant, numerous stars such as Jean Arthur, Carole Lombard, Ginger Rogers, Claudette Colbert and Irene Dunne all turned down the chance to co-star opposite the actor.

“I think in my opinion [the other actresses] felt that they were just going to be second fiddle to Cary Grant, who was a big star,” film historian Sloan De Forest told Fox News.

“He was really coming into his own as a huge star at that time,” she continued. “Today, it’s a whole different ball game… But the actress wouldn’t have gotten top billing for this. And I guess next to Cary Grant, I think these women maybe didn’t see the potential in the role… But this is not a Cary Grant movie. It’s a Cary Grant and Rosalind Russell movie. Even a Rosalind Russell and Cary Grant movie. I think in the hands of another actress, it may not have been that way. Rosalind really made the role her own and she dominated the picture.”

In partnership with Turner Classic Movies (TCM), De Forest published a book earlier this year titled “Dynamic Dames,” which examines 50 of the most inspiring leading ladies in film from the 1920s to today, including Josephine Baker, Greta Garbo, Audrey Hepburn, Vivien Leigh and Elizabeth Taylor -- just to name a few. The book also highlights more than 100 photographs.

Russell, who became a major star in both film and on Broadway, is still celebrated for her defining role in “His Girl Friday.”

Actress Rosalind Russell and Cary Grant in a scene from the movie "His Girl Friday." (Photo by Donaldson Collection/Getty Images)

“The film has a tremendous impact on Rosalind’s career,” De Forest explained. “Hollywood didn’t really know what to do with Rosalind Russell for a while. They knew she had something -- a talent that couldn’t be denied. She was incredibly charismatic. But she was also a comic force to be reckoned with. She really was hilarious and her personality just shines through. Hollywood realized she was beautiful, but she can also be funny and do slapstick.”

Russell may not have been Hawks’ first choice, but she was determined to make it her own. In fact, De Forest pointed out that in her later years, Russell admitted in her memoir that she took matters into her own hands when filming began.

“This could explain why so many women turned down the role,” De Forest said. “They sensed what was going to happen… I don’t think it was a deliberate slight against her, but it did seem that Howard Hawks was favoring Cary Grant initially. He had the funnier bits. And Rosalind felt left out. So, she went to her friend who was an ad man and hired him to help her create these comedic, improv moments on the spot. Because of her initiative, her lines stood out just as much as Cary Grant. She was able to match him.”

“She was bubbly, but she was also sharp and quick-witted, which is exactly what Howard Hawks wanted,” De Forest added. “That’s why everyone in the film speaks at this rapid pace, to keep the comic energy up. And audiences responded to that.”

Major Fred Brisson, just back from Europe where he served as General's Arnold's Chief of radio activities, and his lovely wife, screen star Rosalind Russell, are shown enjoying their happy reunion at the famous Stork Club, in New York. Miss Russell recently completed her new picture "She Wouldn't Say Yes" and came east to be with her husband. This photo was taken in 1945. (Photo by Getty)

And someone already had their eye on Russell.

Frederick Brisson, a Danish-born theatrical agent, first became captivated by Russell while watching her 1939 film “The Women” on a ship crossing the Atlantic that same year, The New York Times reported. When he became Grant’s house guest in Hollywood, it turned out the actor was co-starring with Russell in “His Girl Friday.” Brisson then asked to be introduced to the leading lady.

The couple tied the knot a year later in 1941. Grant was the best man at their wedding. Brisson and Russell welcomed a son named Lance in 1943 and they remained together until her death in 1976 at age 69 from cancer. (The family gave her age as 63, per The New York Times). Brisson passed away in 1984 at age 71 after suffering a stroke.

De Forest shared that throughout her decades-long career, Russell always remained grateful for the chance to take on “His Girl Friday.”

Actress Rosalind Russell and Cary Grant in a scene from the movie "His Girl Friday." (Photo by Donaldson Collection/Getty Images)

“I feel like it was always her favorite role,” she said. “She said that out of all the career women she played in the 1940s, this was her favorite. I think she always had fond memories of it.”

The New York Times shared that in her later years, Russell was forced to retire after suffering the effects of “crippling arthritis." According to the outlet, her last appearance was in the 1972 TV film titled “The Crooked Hearts.” Three months before her death, Russell had surgery to replace her right hip joint.

But years before, in the 1940s, Russell and her husband had developed a production company. De Forest said that one of her most important works was the daring 1956 drama “The Unguarded Moment,” which was based on a story by Russell and Larry Marcus. The film, which starred Esther Williams, chronicles how a teacher is sexually harassed by a high school boy who later becomes a murder suspect.

“It’s very impressing because Hollywood was so male-dominated,” De Forest said. “All the studios were run by men. And here she was trying to so hard to get the female perspective in there. And this was the 1950s.”

Rosalind Russell (1908 - 1976) in a scene from 'The Women' about New York socialite women. It was directed by George Cukor for MGM. This photo was taken in 1939. (Photo by Hulton Archive/Getty Images)

Today, De Forest wants Russell to be remembered for the lasting impact she had on Hollywood and how she wasn’t afraid to break the rules for a good laugh, despite being a glamorous screen siren.

“I think there’s a misconception that these women were just handed roles,” she said. “If you had enough power, you could really shape your career yourself and select your own roles, make it your own. That’s exactly what Russell did. And we’re still talking about it today.”