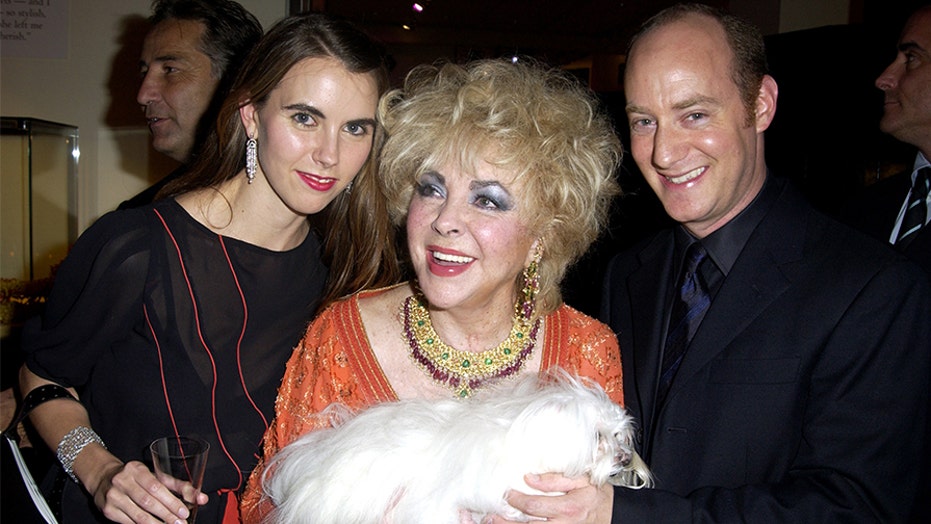 Elizabeth Taylor, one of the most iconic movie stars of Hollywood’s golden era, is stirring headlines once more.

Julien’s Auctions is partnering with House of Taylor in Beverly Hills for a three-day auction beginning Friday titled “Property from the Lifestyle of Elizabeth Taylor,” which highlights designer clothing, home decor and other personal items from actress’ archives. The Hollywood Reporter said the sale could top $5 million.

Taylor died in 2011 at age 79 from congestive heart failure.

Elizabeth Taylor with Rock Hudson (L) on the film set of "Giant," directed by George Stevens in 1956. (API/GAMMA/Gamma-Rapho via Getty Images)

MARILYN MONROE’S ICONIC COSTUMES FROM ‘GENTLEMEN PREFER BLONDES,’ ‘RIVER OF NO RETURN’ UP FOR AUCTION

Tim Mendelson, who worked as Taylor’s executive assistant for more than 20 years, currently serves as co-trustee of the icon’s estate, as the star requested before her passing. He spoke to Fox News about his involvement with the highly anticipated auction, his favorite memories of Taylor and what her final years were really like.

Fox News: What made the House of Taylor get involved with an auction like this one?
Tim Mendelson: When it comes to Elizabeth’s life we’re all about storytelling. And it’s been eight years since we had the Christie’s auction, which was record-breaking and incredibly successful. But this time, we wanted to tell a different story about Elizabeth. We had a lot of stuff and thought it would be a good idea to share them with the world. I feel this is a more intimate look into Elizabeth’s life and who she was as a person.

Fox News: Who was the real Elizabeth Taylor?
Mendelson: She was the same person that you saw on the screen. Elizabeth was always glamorous even when she was at home. Everything about her was just glamorous, from the way she moved her hands. She was always wearing her diamonds. But she was also a woman with a great sense of humor who opened her heart to those she cared about. And I think this collection really shows a more personal side to who she was, in addition to that glamorous persona we all know and already love.

Fox News: What are some of your favorite pieces from the auction?
Mendelson: There’s definitely the luggage with the tags labeled “Mine!” — I think that really exemplified her sense of humor. That was her personal luggage and it went all over the world with her.

There’s also a dress we put in that she wore to speak before the general assembly. It’s significant because it shows a sense of an approach to her. She’s not dripping in diamonds for the United Nations. She’s wearing something that doesn’t have the glitz and glam we associate with her. She wanted the focus to be on her message. She wanted to raise awareness of HIV research and how those efforts can help those in need.

Fox News: What was your initial impression of Elizabeth?
Mendelson: She was always this big movie star, but she was also this big kid at heart. She was incredibly kind to me and wasn’t shy to tell you if you made her feel special. Even when I was really just brand new to everything, she always made it an effort to point that out to me.

I never thought it would turn out this way, but she made a decision that she wanted me to be with her for life. I remember [her then-husband] Larry [Fortensky] was like, “My God, you do such a great job. What are you going to do afterward?” I remember Elizabeth turned to Larry and said, “He’s going to work for me for the rest of his life.”... Now that I look back at it, I felt she predicted that I would have this job for the rest of my life. I’m still working for her.

Fox News: What are some fun facts about Elizabeth as a person that would surprise fans today?
Mendelson: I just remember her incredible sense of humor. And she was a people pleaser… She loved giving gifts. She adored seeing your reaction when you saw this gift that she personally picked out just for you. And she loved receiving gifts, too, whether you paid $5 for it or got the Krupp diamond.

She would just get so excited over anything you gave her and made you feel so special that you even thought of her. And then she would wear whatever you gave her for a while. She always gave you a reaction. She was never one of those, “Oh, you shouldn’t have” people. She would just immediately throw her arms around you and be so appreciative of you. It was like this big celebration (laughs). It was wonderful. She was wonderful.

Elizabeth Taylor's Red Amber Glass Sculpture by Dan Dailey for Daum, 1988, estimated at between $6,000-8,000, is displayed during a media preview on December 1, 2019 at Julien's Auction House in Beverly Hills, California, ahead of the three-day 'Property from the Lifestyle of Elizabeth Taylor Auction' beginning on December 6. (FREDERIC J. BROWN/AFP via Getty Images)

Fox News: Obviously she loved jewelry. Is it true she would sleep with her jewelry?
Mendelson: Oh yes, she hardly took off her jewels, except when it needed to be clean or she was taking a bath. It’s interesting, she didn’t get her ears pierced until the ‘80s, but by then, it just wasn’t practical anymore, especially for someone who loved jewelry as much as she did… But the things she wore to bed weren’t those big show-stoppers. She wore the smaller, more sentimental pieces.

Fox News: What do you want people to know about Elizabeth Taylor?
Mendelson: I want people to know what a loving person she was. Yes, there were the jewels and the glamour that came with being a movie star, but she was more than that. If a friend was in trouble or something serious was happening, she immediately went straight to the problem and helped in any way possible. She did whatever she could in her power that a normal person wouldn’t be able to do. She wanted to use her celebrity to help people.

I remember during the AIDS crisis, she had already become an advocate and was educating herself. And then she really went into action to raise awareness. That was a tough time. Nobody even wanted to look at the problem of AIDS. Even the gay community was just starting to wake up to it. But Elizabeth was determined to help. And she publicly spoke out. She did the same for friends, family members — anyone who was in trouble at any time of the week. When she saw someone who needed help, she would become committed to being by their side.

Fox News: What were her final years like?
Mendelson: She was still very much active. She was diagnosed with congestive heart failure, which I don’t think a lot of people knew or understood… I remember we went to the hospital for the final time. She was getting ready to go to New York for an amfAR event. She was being honored, but she didn’t make it. But, she was still planning. She was always the same person, just older and wiser. She was a little more open about her feelings. She was a pretty guarded person, and I guess she had to be, given her position. But during those final years, she became more and more open. But she was still very much keeping busy and pursuing her passions — just celebrating life until the end.

Fox News: You must have many, but what’s one memory from your time with her that still sticks out in your mind?
Mendelson: Shortly before Elizabeth passed, my mom was sick. She died nine months before. They had to do emergency surgery on my mom, which didn’t work. But Elizabeth came and sat at the hospital. She was there. She talked to the doctor and made sure they were doing everything they could. When it was finally time to say goodbye at the hospital, Elizabeth said, “Bring her to my house.” And she was there when my mom passed. She called me. I had gone home and she called me. When I came up to her house, there she was, sitting with my mom. That was a very important memory, but there are lots of others.