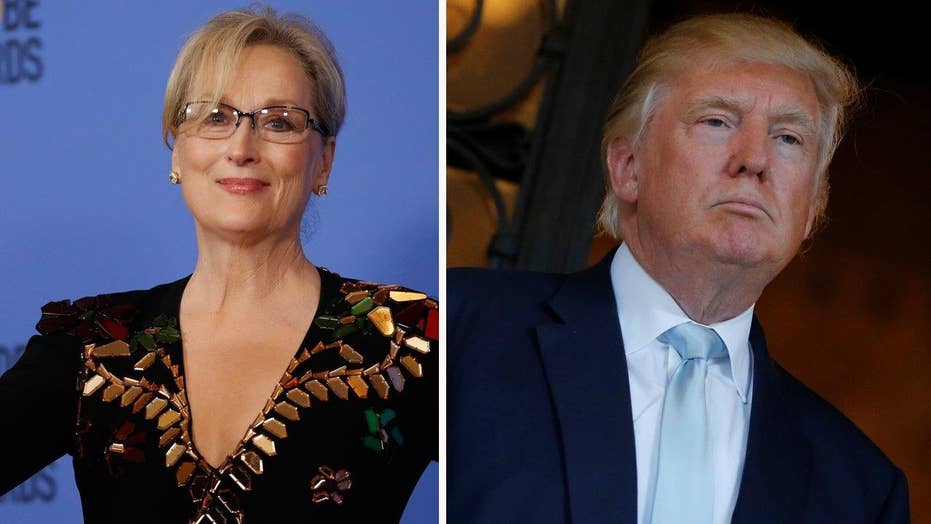 Four4Four: The panel weighs in on the 2017 Golden Globes turning into a Hollywood hate-fest against Donald Trump

Donald Trump wasted no time responding to Meryl Streep's remarks at Sunday night's Golden Globe Awards where the actress gave a somber speech about the President-elect.

Trump called Streep "one of the most over-rated actresses in Hollywood" in a tweet Monday morning calling her a "Hillary flunky who lost big."

Shortly after the 74th annual Golden Globes wrapped, where "La La Land" and "Moonlight" were the night’s big winners, Trump told the NY Times he had not seen the show or Streep's remarks. He also added that he was "not surprised" for coming under attack from "liberal movie people" especially a "Hillary Lover" like Streep.

He continued to defend his behavior from an interview with a disabled reporter in 2015 in which he insists he didn't mock anyone, a moment Streep had said was an example of Trump's "instinct to humiliate."

"I was never mocking anyone. I was calling into question a reporter who had gotten nervous because he had changed his story," he told the paper in a phone interview after the Globes. "People keep saying I intended to mock the reporter’s disability, as if Meryl Streep and others could read my mind, and I did no such thing."

Hillary flunky who lost big. For the 100th time, I never "mocked" a disabled reporter (would never do that) but simply showed him.......

"groveling" when he totally changed a 16 year old story that he had written in order to make me look bad. Just more very dishonest media!

She said of Streep, "I really wish she would have stood up last night and said, 'I didn't like the election results but he is our president and we're going to support him.'"

And with the inauguration just 11 days away, the President-elect said he's not worried about having celebrities attend the momentous day.

"We are going to have an unbelievable, perhaps record-setting turnout for the inauguration, and there will be plenty of movie and entertainment stars," Trump said. "All the dress shops are sold out in Washington. It's hard to find a great dress for this inauguration."

In accepting the Cecil B. DeMille Award, Streep said Trump's behavior "sank its hooks in my heart." She asked for "the principled press to hold power to account, to call him (Trump) on the carpet for every outrage." Her comments were met with applause, tears and support by her fellow actors in the audience, and actor Chris Pine called her speech the "best message of tonight." Trump was the main target of a slew of political barbs including from Golden Globes host Jimmy Fallon who compared the president-elect to the evil King Joffrey in "Game of Thrones."

Hugh Laurie, accepting his award for best supporting actor in "The Night Manager," also indulged in Trump jokes, speculating that this would perhaps be the last Golden Globes ceremony.

"I don't mean to be gloomy, but it has the words 'Hollywood,' 'foreign' and 'press' in the title," Laurie said, explaining his pessimism about the awards surviving the Trump era. He added that some Republicans don't even like the word "association."

He accepted his award "on behalf of psychopathic billionaires everywhere."