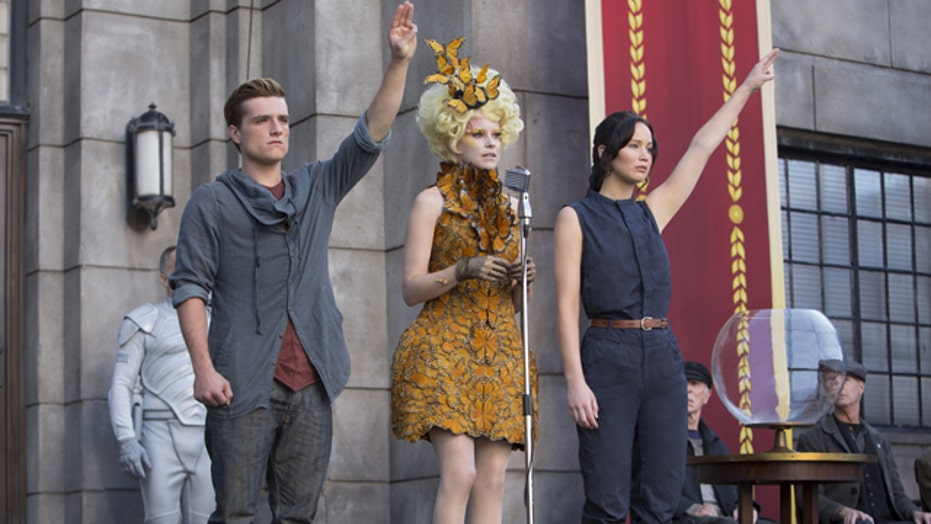 NEW YORK – Although a resounding success, the “The Hunger Games” seemed to only be testing the temperature without ever gaining its confidence and growing to its full potential, but “Catching Fire” confidently charges full-on into the flames and the result is spectacular.

Running close to two and a half hours, “Catching Fire” is a blistering whirlwind, keeping the essentials of Suzanne Collins’ book while building a wholly distinct and self-contained film that works incredibly well on its own. It’s a tighter, darker and certainly edgier film than the first and has the complexity and tone of an R-rated movie, but finds restraint by frequently using implication rather than showing actual violence.

Jennifer Lawrence has an Oscar for a reason, and she again hits the bull's eye as Katniss. Lawrence the actor has certainly matured and refined her talent since becoming the bow and arrow wielding heroine and she harnesses her talent here, creating more tangible layers to Katniss than appear on the page. Though a hero, idol and celebrity, Katniss is now broken, suffering post-traumatic stress disorder and living in fear for the safety of her family. Riddled with guilt and shame, Katniss the person has become a hollow shell even though her symbol of defiance has ignited the fuse for rebellion. Unlike similar heroes in “Harry Potter” and “Lord of the Rings,” Lawrence turns the archetype into a relatable everyman, showing Katniss’ attempt to salvage her humanity in a world stripped of it, or struggle with the idea that her rebelliousness is costly and dangerous. Lawrence’s nimble yet commanding portrayal makes the burden, consequences and stakes of this archetype’s actions feel relatable, palpable and immediate. Lawrence again proves Katniss is stronger and smarter than most heroes in this male-dominated genre.

Gary Ross, director of the first feature, has been replaced by Francis Lawrence, who has a far better grasp of Collins’ material, boosting the production’s scope and polishing a gutsy, formidable story.

Like the book, the film feels like two separate stories of varying degrees of quality. The first half of the film is quite impressive as Katniss and Peeta (Josh Hutcherson) are reluctantly forced into a dog and pony show as they travel from district to district to promote their Hunger Games win. While the purpose of the tour is to remind the districts of the capitol’s stronghold, Katniss’s bravery and compassion for her Hunger Games rivals has inadvertently planted the seeds for rebellion. The film’s first half is bold – more so than the book -- delicately pushing the envelope of displaying violent oppression in a young adult story. Even though this film doesn’t feature kids killing kids like the first, the ideas presented are far more mature: Katniss suffers PTSD, political corruption, civilian beatings, rampant fear. These are pretty heavy themes, but director Francis Lawrence and screenwriters Simon Beaufoy and Michael Arndt do remarkable jobs at keeping the stakes real without gratuitously tipping the balance.

The second half of the film, while still good, is just essentially a repeat of the first film. To punish Katniss’ insubordination, President Snow (Donald Sutherland) announces a Quarter Quell, another Hunger Games match pitting 24 of the previous victors against each other. Katniss and Peeta return to a much harsher and volatile arena. The rinse and repeat of the second half is salvaged by its ferocious energy. Francis Lawrence handles action sequences in the arena extremely well, creating gut-wrenching suspense while toning down the sappy romances between Katniss, Peeta and Gale (Liam Hemsworth) to a moderate level.

There are plenty of typical science fiction and dystopian ideas throughout “The Hunger Games” stories, but “Catching Fire” interestingly threads a commentary on the role of celebrity – good and bad – in a totalitarian society. Celebrity is used to manipulate, dazzle and distract the public from the wheeling and dealings of the corrupt government. It’s also used to inspire hope in the oppressed. Finally, it’s frighteningly spun to break idolatry by having the fans rabidly turn against their hero.

A significant addition to the cast is Philip Seymour Hoffman as Plutarch Heavensbee, the enigmatic new mysterious architect of the Hunger Games. Joining him are Jeffrey Wright and Amanda Plummer as brainy and slightly crazy allies in the arena.

Everyone – actors and crew – have stepped up their game for “Catching Fire.” The acting has significantly improved and the special effects are leaps and bounds better than the first film, no doubt a result from the first film’s soaring profits. Composer James Newton Howard has even fleshed out his score, adapting to the larger scope of the story.

“The Hunger Games: Catching Fire” is top-tier sci-fi and is significantly better than the first and will leave you impatiently waiting for Katniss’ next act.