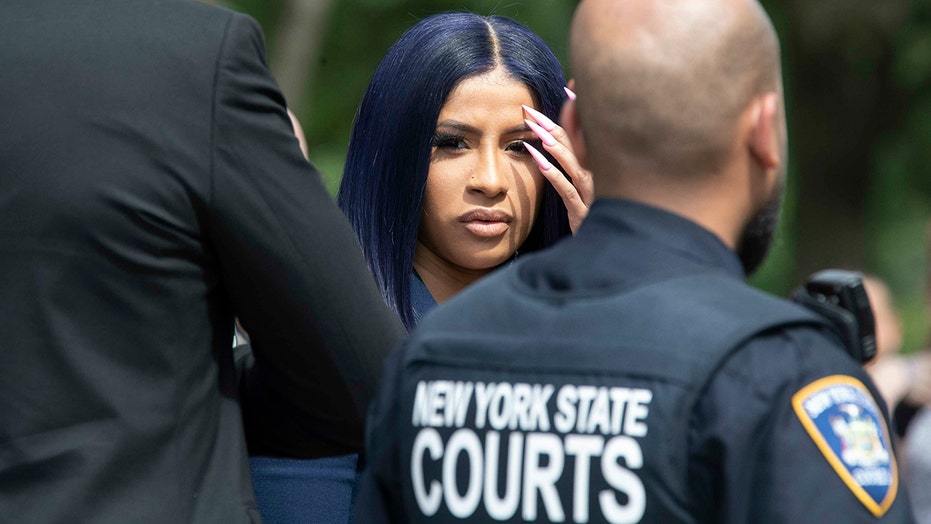 Grammy Award-winning rapper Cardi B was arraigned on Tuesday in a New York Supreme Court on new felony charges in connection with a fight last year at a strip club.

The rapper -- who was dressed in a dark blue pantsuit with her hair tinted blue -- pleaded not guilty in state court to attempted assault and various misdemeanor charges, including harassment, criminal solicitation, conspiracy and reckless endangerment.

The judge presiding over the case gave the 26-year-old the choice of having the docket of charges read aloud in the courtroom -- which her attorney rejected, TMZ reported on Tuesday. The outlet said Cardi B subsequently addressed the judge and told him, "Not guilty, Sir. Your Honor."

CARDI B RIPS JUMPSUIT FROM TWERKING, PERFORMS IN A BATHROBE AT BONNAROO

Last week, prosecutors in Queens told Fox News the case would remain sealed until Cardi B's arraignment on Tuesday – at which point the specific details surrounding the charges would be made available.

The “Bodak Yellow” rapper, whose real name is Belcalis Almanzar, rejected a plea deal in April that would have had her plead to a Class A misdemeanor for allegedly attacking a pair of bartender sisters – a claim that her lawyer has said is false because she didn’t injure anyone.

Police have said a fight broke out in which chairs, bottles and hookah pipes were thrown, causing minor injuries to the woman and another employee.

After Cardi B rejected the plea deal, prosecutors presented the case to a grand jury.

Two other defendants in the case who allegedly participated in the brawl also pleaded not guilty Tuesday to similar charges.

On Sunday, the Bronx-born performer took home top honors at the BET Awards – securing wins for Female Hip-Hop Artist and Album of the Year for her debut album “Invasion of Privacy.” The mother of one was also nominated in five other categories.