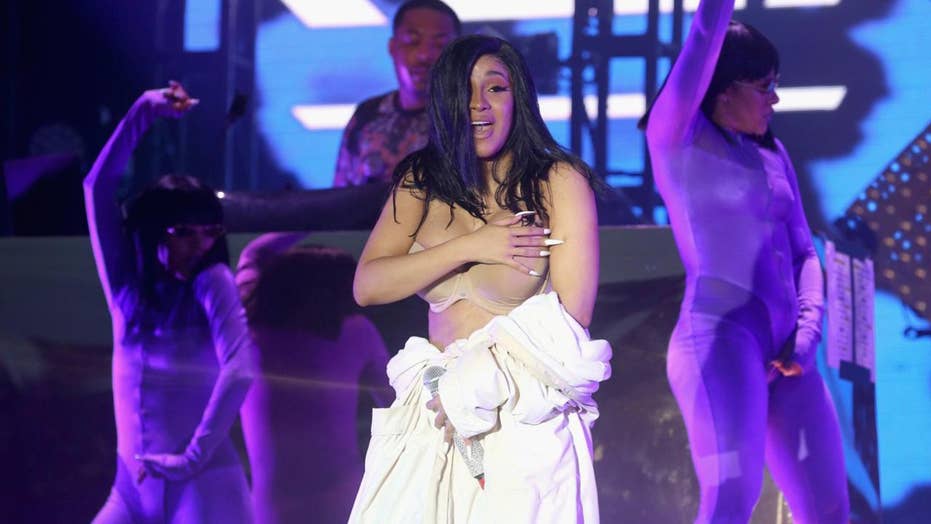 Cardi B suffered a major wardrobe malfunction on stage at Bonnaroo Arts and Music Festival.

The 26-year-old rapper twerked so hard she ripped her multi-colored jumpsuit on her backside during her performance in Tennessee.

The star was gyrating in front of crowds when her zip split and gave onlookers a closer look at her derriere.

Cardi swiftly covered up and pulled on a robe to protect her modesty.

But she did not let the mishap stop her, and she proved to be a true professional by continuing her set.

One clip captured her in a skimpy Gucci swimsuit and white knee-high boots on her Instagram account.

She captioned the clip: "This choppa come straight from Dior."

A separate video on her Instagram Story sees her twerking in the one piece on a revolving platform.

She captioned the uploads: "I'm exhausted", while another video panning around the venue read "I pack s—t out."

Cardi B performs at the Bonnaroo Music and Arts Festival on Sunday, June 16, 2019, in Manchester, Tenn. (Amy Harris/Invision/AP)

Cardi's performance comes shortly after she had to cancel some performances to recover from plastic surgery.

The "Bodak Yellow" hitmaker suffered complications after she had liposuction and breast augmentation surgery following the birth of her daughter Kulture last year.

Doctors urged her to take some much needed time out to rest.

Cardi ignored medical advice at the Beale Street Music Festival in May by performing, and running the risk of ruining her lipo.

She said at the time, which has been reported on People: "I shouldn't really be performing because moving too much is gonna f—k up my lipo. But b—h I'm still gonna get my motherf—king money back, let's go!"

However, Cardi was forced to reschedule her appearance at the 92Q Spring Bling Festival in Baltimore as well as her concert in El Paso, much to the artist's upset.