Whitney Austin, arriving from Louisville for a meeting, walked right into the line of fire in Thursday's bank shooting in Cincinnati. She was shot 12 times but survived. (Facebook)

After surviving 12 gunshot wounds in Thursday's fatal shooting rampage in Cincinnati, a bank employee visiting from Kentucky says she's grateful for the help she received at the scene.

"I'm so thankful to the paramedics and first responders and the doctors, nurses and staff at UC Medical," said Whitney Austin, 37, who remained hospitalized in stable condition Friday.

"I'm so thankful to the paramedics and first responders and the doctors, nurses and staff at UC Medical."

— Whitney Austin, 37, who was shot 12 times in Cincinnati on Thursday

Austin walked into a Fifth Third bank branch and directly into the line of fire as a gunman killed three people and injured two, including her, Louisville FOX station WDRB-TV reported.

"I'm still processing the events from yesterday, the impact to the victims, to me and the community. And I'm thinking about how I can make a difference in the future," Austin told the station.

Austin, a senior product manager for digital lending for Fifth Third in Lousiville, specifically thanked two police officers who rushed to her aid, the report said.

She and another victim, not yet identified, were wounded in the shooting before police shot and killed the suspect. 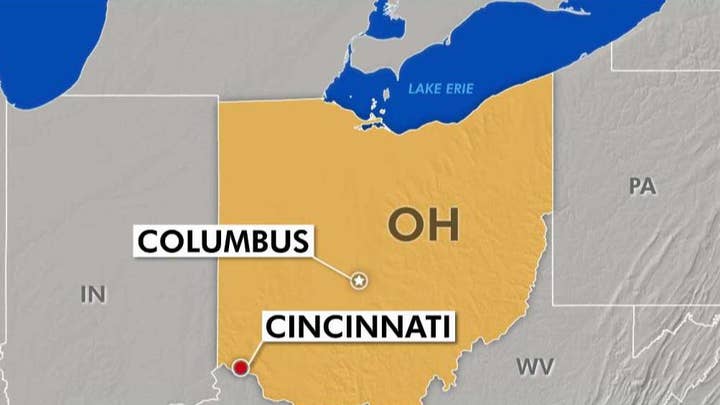 The Hamilton County Coroner's office identified those killed in the attack as Pruthvi Kandepi, 25; Luis Calderon, 48; and Richard Newcomer, 64.

According to police, all three men were killed when the suspect, identified as Omar Enrique Santa Perez, 29, opened fire at the 30-story headquarters of Fifth Third Bancorp.

Newcomer, one of the three killed, was a contractor who worked for Gilbane Building Co. His wife, Cynthia Newcomer, told Cincinnati.com that he worked in construction around the city for more than 30 years.

“He built this city. The buildings we live and work in, he helped construct.”

“He built this city. The buildings we live and work in, he helped construct,” Cincinnati Mayor John Cranley told the paper.

Company spokesman Wes Cotter described Newcomer as a great employee, and struggled to describe how grief-stricken his co-workers are.

Calderon, who also died by gunfire, moved to Cincinnati to provide a better living for his family, Cincinnati.com reported.

“He was working at the bank," wife Ana Maria Calderon, in tears, told the paper. "He moved a year ago to Cincinnati to take a better job opportunity. He thought it would be better for the children."

Luis Calderon (L), 48, was killed in the line of fire in the Cincinnati shooting. (Angela Almaguer via GoFundMe)

The Calderons married in Colombia and have two children.

"To help us all more, he got a good job offer and it was a really tough decision to make because he was leaving everything behind. … And this happened."

A GoFundMe account has been set up for the family.

Sammarco posted Thursday on Facebook, asking how officials will explain to his parents "they will never see their son again because of a senseless shooting in a foreign country."

The local Telugu Association of North America office said it plans to help Kandepi's father. He wants his son's body to be taken back to India.

Kandepi was an engineer and “came to Cincinnati with a dream,” Cincinnati.com reported.

But that dream came to a startling halt Thursday.

“It’s so cruel,” Yash Yeddulapalli, Kandepi’s college roommate, told the paper. “It’s so unfortunate and very unfair that this has happened to him.”

“It’s so cruel. ... It’s so unfortunate and very unfair that this has happened to him.”

Yeddulapalli said his friend wanted to “get everything right so he would make people happy.”

To Kandepi's father, his son’s death is a nightmare.

“I’m just staring at my son’s photo,” Kandepi’s father told Yeddulapalli. “Please, someone. Tell me that it’s a bad dream.”

Meawhile, hundreds gathered in Cincinnati on Friday to remember the three people killed and two injured.

Many left bouquets of flowers alongside a fountain that sits at the center of Cincinnati's Fountain Square, just steps from where the shooting took place.

Mayor Cranley said the first responders and police officers who confronted and killed the gunman showed true heroism and bravery.

“The heroism of these officers is truly remarkable,” Cranley said, according to Cincinnati.com. "Police saved lives, and we owe them all a huge debt of gratitude."

He said the officers risked their lives by running into the line of fire.

Police said they have not yet determined a motive for the shooting.