Marilyn Mosby on the overturning of the conviction of Adnan Syed

Adnan Syed has always maintained his innocence in the 1999 murder of ex-girlfriend Hae Min Lee for decades — but he was convicted the following year.

On Monday, a Baltimore court vacated his life prison sentence at the request of State’s Attorney Marilyn Mosby.

Syed, now 41, walked free after 22 years in prison for a crime he said he did not commit after prosecutors told the court, "The state no longer has confidence in the integrity of the conviction."

He’s not in the clear yet. Prosecutors were given 30 days to decide whether to seek a new trial, and he will be held on house arrest in the interim.

Adnan Syed, center, leaves the Elijah E. Cummings Courthouse, Monday, Sept. 19, 2022, in Baltimore. A judge has ordered the release of Syed after overturning his conviction for a 1999 murder that was chronicled in the hit podcast "Serial."  (Brian Witte/AP)

Prosecutors highlighted several pieces of evidence, including the possibility of additional suspects: one who had allegedly threatened to kill Lee and one who is linked to an address where Lee's car was ultimately discovered. They also said the other possible suspects each were convicted of crimes after Lee's murder.

"We believe this is consequential information that needs to be reviewed further," Assistant State’s Attorney Becky Feldman told the court.

The "new" evidence, however, has been around for years, according to "Serial" podcast host Sarah Koenig.

"Serial" cast renewed scrutiny over Syed’s conviction after it aired his story in 2014. Several appeals over the years failed to secure his release. But Mosby’s office last week filed a surprise motion to vacate based on evidence obtained in a year-long review of the case.

Shamim Syed, Adnan Syed's mother, left, celebrates with others outside the Cummings Courthouse, Monday, Sept. 19, 2022, in Baltimore. A judge has ordered the release of Adnan Syed after overturning his conviction for a 1999 murder that was chronicled in the hit podcast "Serial."  (Brian Witte/AP)

"Yesterday, there was a lot of talk about fairness, but most of what the state put in that motion to vacate, all the actual evidence, was either known or knowable to cops and prosecutors back in 1999," Koenig said on a new episode released after Judge Melissa Phinn approved the motion to vacate Syed’s sentence. 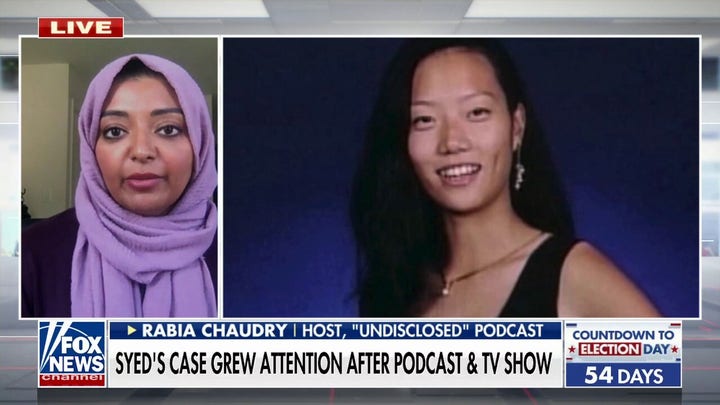 Lee, 18 at the time of her slaying in 1999, was found buried in a shallow grave at Leakin Park in Baltimore. Her death was ruled a homicide by manual strangulation.

Her brother, Young Lee, said he was shocked by the motion but had faith in the court’s ability to reach a fair decision during the hearing Monday that led to Syed’s release.

"I am not against his release," he said. "I was kind of blindsided. I always thought that state was on my side, but out of nowhere I hear that there is a motion to vacate judgment, and I thought honestly, I felt betrayed."