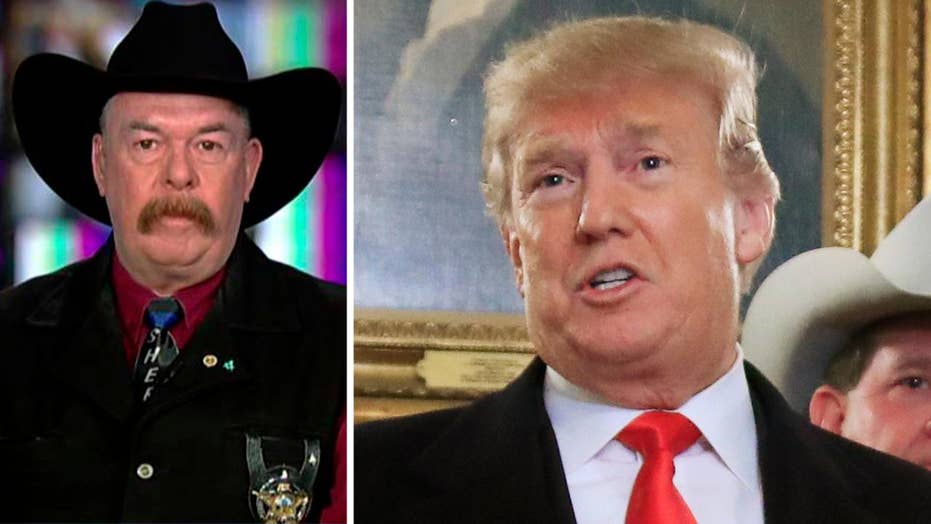 As Washington, D.C. debates whether or not a wall will stop the flow of illegal immigration from Mexico to the United States, one Arizona county sheriff says it led to a dramatic 91 percent reduction in crime.

“The fence worked here. It may not work in New Mexico, I can only talk about my area. But [politicians should] defer to the Border Patrol experts,” Yuma County Sheriff Leon Wilmot told Fox News.  “They know the situation.”

In 2006, President George W. Bush passed the Secure Fence Act which had a tremendous impact in Yuma County. In 2015, Fox News reported a 96 percent reduction in apprehensions due to a 20-foot tall steel fence and manpower being tripled. Wilmot was a deputy during that time but saw the impact firsthand.

“It was a 91 percent drop,” Wilmot said. “It obviously helped us curb some of the criminal activity that we unfortunately had to deal with.”

The 91 percent reduction in crime Wilmot cites is a Sheriffs office number. According to Wilmot, service calls and arrests dropped dramatically between 2005-2009 leading to the conclusion that added fencing along with more manpower had a major impact on local crime. According to Wilmot this number also includes immigration-related arrests and apprehensions that Sheriff's deputies would have made and crimes committed against smuggling victims.

“When they were no longer able to take advantage of our border as a smuggler’s paradise, the crimes against those being smuggled virtually stopped,” Wilmot said.

The “wall” the president wants has been a bone of contention between Democrats and Republicans. Wilmot, however, believes it is an important part of fixing the border.

“When it comes to border security you need all of it,” said Wilmot.  “You can fence up a house but you need everything else to make it secure.”

“For [Yuma County] we needed it to stop the criminal element.”

In a recent interview with the Epoch Times, Wilmot talked about utilizing fencing to cut border crime in the area by 91 percent and the Obama administration’s impact on the area.

During his interview with FoxNews.com, he was more focused on other deterrents to stopping immigrants from taking the dangerous trek to through his area and other border areas.

“Why is the U.S. attorney's office not prosecuting these parents?” Wilmot said. “These children are being pushed under razor wire, canal water. That’s not being a parent. We found a five or six-year-old the other day with pneumonia because his parents didn’t properly take care of him.”

According to Wilmot, the Border Patrol in his area currently has 160 immigrant children in their custody.

ICE: NO CONTACT WITH ILLEGAL IMMIGRANT ACCUSED OF KILLING CALIFORNIA COP BEFORE MURDER

“We don’t have enough time determine if the [adults] they are with have custody,” Wilmot said.

Law enforcement leaders like Wilmot are becoming more vocal when it comes to immigration and letting everyone know what works and what is needed.

Wilmot believes Washington isn’t trying to be part of the solution.

“They need to get their heads out of the sand.  They need to get to work,” Wilmot told FoxNews.com.  “Law enforcement is working, they’re not even getting paid.  They can’t agree on a budget?”

An observation tower rests near the border fence at the Yuma Border Sector on the US/Mexico border in San Luis, Arizona. (JIM WATSON/AFP/Getty Images)

Wilmot’s county borders 126 miles with Mexico and while he does believe President Donald Trump is helping by forcing Congress to deal with illegal immigration and its impact, he still feels like there is more to be done by both parties and believes the issue shouldn’t be political.

“Our border patrol partners are overwhelmed,” said Wilmot. “I don’t care who was elected.”

In October  the Western States Sheriffs Association released a statement on the immigration crisis saying that it was at a “critical juncture.”

“The vast majority of our citizens are truly frustrated, and disappointed with our national leadership. It is past time that our elected national leaders put aside their partisan positions and focus on what is best for our nation, while maintaining the rights of all people in our country,” the statement read.