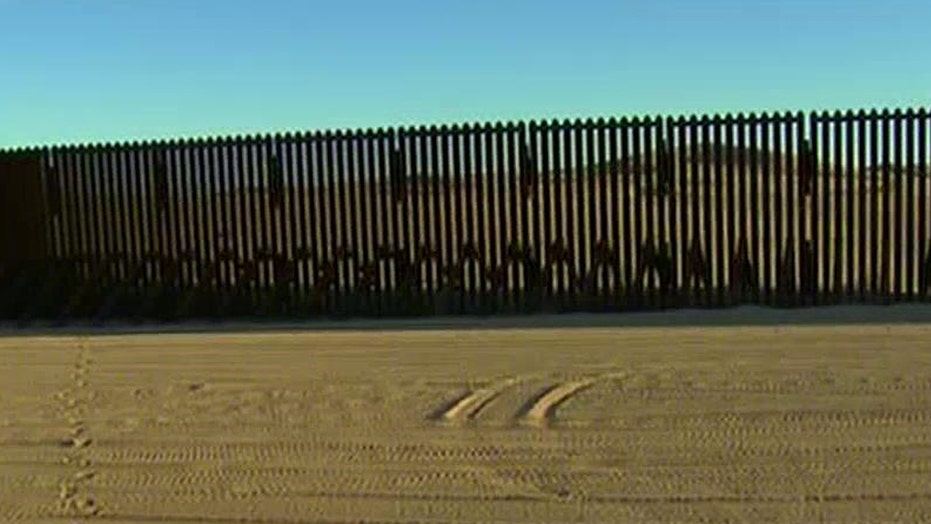 A look at the 'gold standard' of border security

William la Jeunesse reports from the border at Yuma, Arizona

YUMA, Arizona – When Americans think of a secure border, whether they know it or not, they see Yuma, Ariz., and the 20-foot high steel curtain separating it from Mexico.

Beyond the imposing wall is 75 yards of flat, sandy, no man’s land, monitored by cameras and sensors and agents in SUVs. If an illegal immigrant successfully runs that gauntlet, they face another tightly woven steel fence and a third cyclone fence topped by barbed wire.

“It works,” said Border Patrol Agent Richard Withers. “This is the most secure area of the border. It is pretty hard for a guy to cross here. But they try.”

It wasn’t always this way. In 2005, Yuma was chaos. Pushed out of San Diego by Operation Gatekeeper in the late 1990s, drug and human smugglers targeted San Luis, a sleepy little border town just over the California state line south of Yuma.

"It is pretty hard for a guy to cross here. But they try.”

That year, illegal immigrants overwhelmed Yuma. Border agents made on average 800 arrests a day, and watched hundreds of suspects run away. Stolen vehicles laden with drugs raced over the border at high speeds unhindered and unmolested. An estimated eight trucks a day sped out of Mexico onto Interstate 8 and disappeared into the American heartland, stuffed with immigrants or drugs.

“It was the Wild West out here,” said Yuma sector chief Anthony Porvaznik.

Video of the Yuma chaos made its way to Washington, where then-President George Bush pledged to fix it. In 2006, Congress passed the Secure Fence Act. Three years later every mile of Yuma’s border with Mexico contained a fence or vehicle barrier.

“We essentially apprehend 92 percent of all entries through the Yuma sector,” said Porvaznik, as he steered a white and green Chevy Tahoe through the sand. “That is 126 miles of border, which includes 12 miles of these sand dunes. On a scale of 1 to 10 we are a 9.”

Today, Yuma has triple the manpower and apprehends just 15 illegal immigrants a day, a 96 percent reduction. Instead of 2,700 vehicle penetrations, this year’s total is just 27.

While the fence is the most important factor in Yuma’s success, Porvaznik said it isn’t the only one.

“Unless you give them a reason not to come back, they will,” he said. “When we started Operation Streamline, fewer deportees tried to cross. It was simple. They didn’t want to go to jail. Our first-time offenders went to jail for 15 days.  We took them out of their smuggling cycle.”

Porvaznik said some immigrants quit, while others just moved farther into the desert where the fence ended. And that’s the challenge of border security. Unless every mile is protected, smugglers and would-be illegal immigrants simply find a soft spot and exploit it.

“It used to be overwhelming,” said veteran agent Tomas Diaz.  “It isn’t as active, but we still see the Mexicans trying to swim across, or they get smuggled in little boats.”

Diaz pilots one of two Customs and Border Protection boats on the Colorado River where it empties into Mexico. The CBP also has airplanes, helicopters and drones backing up the agents, giving agents greater awareness even when they can’t catch an illegal crosser.

Immigrants no longer try crossing alone. Passage is arranged and controlled by criminal organizations that charge on average $3,000 for a Mexican, $6,000 for a Central American and up to triple that for an Asian, according to sources.

But the fence has also produced negative consequences. Smugglers have been forced to risk travel through the merciless Sonora desert, where only the fittest can survive the 80-mile hike from Mexico to a pick-up site. Some make it, but more than 2,000 did not in the last decade, dying from dehydration or heat stroke, according to immigrant advocate groups.

Yuma’s fence, along with agents who patrol the border and police and prosecutors willing to jail alien felons are a powerful example of border security could look like, if Congress and the President agreed on a goal. But the biggest draw remains employment, and agents say until the federal government is serious about interior and worksite enforcement, where employers are fined or jailed and compelled to check immigration status of employees, the problem won’t go away – no matter how many billions of taxpayer dollars are spent on enforcement.