Mexican national Perez Arriaga was in the country illegally and had a history of arrests; William La Jeunesse reports from Los Angeles.

U.S. immigration authorities confirmed they had no contact with the Mexican illegal immigrant suspected of killing a California police officer until the man was arrested last week.

Immigration and Customs Enforcement (ICE) emailed a statement to The San Francisco Chronicle on Sunday saying it had placed its first immigration detainer on suspect Gustavo Perez Arriaga after the Dec. 26 killing.

Perez Arriaga, who was in the country illegally and had previous arrests, was taken into custody Friday on suspicion of killing Newman police Cpl. Ronil Singh, who was a 33-year-old husband and father of a 5-month-old boy.

Gustavo Perez Arriaga, 33, right, who was in the country illegally and had previous arrests, was taken into custody Friday on suspicion of killing Newman police Cpl. Ronil Singh, 33, left. The arrest in California followed a two-day manhunt. (AP)

The arrest of the Mexican national followed a two-day manhunt.

The officer's death has rekindled a national debate over California sanctuary policies. President Trump seized on the case in a call for tougher border security.

The disclosure by ICE calls into question contentions that Perez Arriaga had benefited from policies that forbid local police from cooperating with immigration officials.

A spokesman for Gov. Jerry Brown said Friday that police could have informed federal authorities if the suspect was a known gang member.

Fox 40 reported Monday night that four suspects accused of helping Arriaga evade law enforcement pleaded not guilty, and bail was set at $100,000 for each. 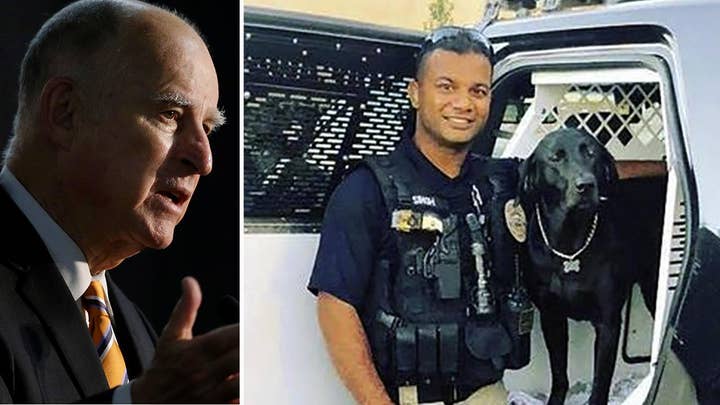 Perez Arriaga is expected to face murder charges that will be filed before his arraignment on Wednesday, said John Goold, a spokesman for the Stanislaus County district attorney's office.

Seven other people have been charged with aiding Perez Arriaga after the killing.

Singh had immigrated from Fiji to pursue his dream of becoming a police officer, officials said. Singh had a 5-month-old son and joined the 12-officer Newman police force in 2011.

Funeral and viewing services for Singh are scheduled for this Friday and Saturday.