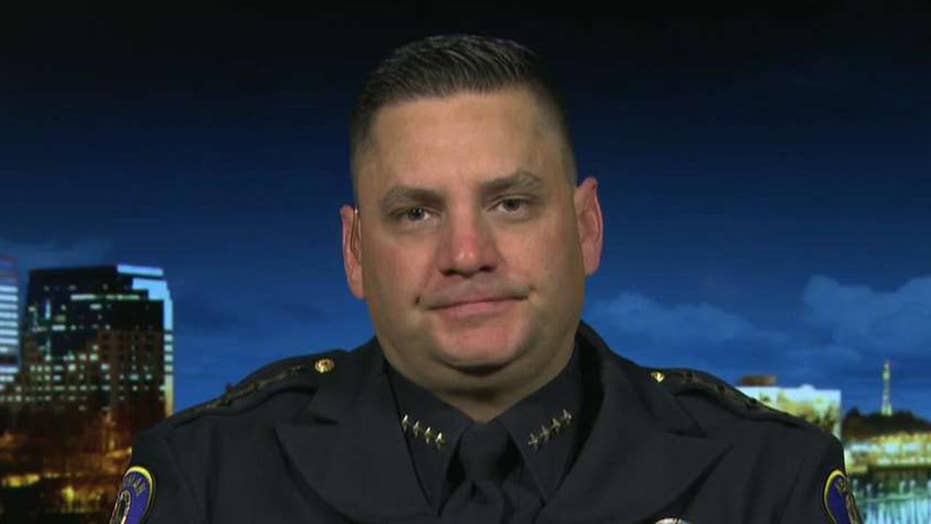 The killing of a California police officer by an illegal immigrant during a traffic stop is a "tragedy" that has dealt a "tremendous blow" to the tiny department, the chief said Sunday.

In an exclusive interview with "Fox & Friends," Newman Police Chief Randy Richardson said that Cpl. Ronil Singh was his first hire when he became chief in 2011. The officer had legally emigrated from Fiji to fulfill his dream of becoming a police officer.

"That's what actually made him stand out, the day I did the interview with him, is his devotion for this profession," Richardson said. "He told me he came here solely to be a police officer and be a part of this country, to protect what was given and allowed to him."

"It was those words that I could see in him that he was going to do well in this profession," he added.

The 33-year-old officer was shot to death Wednesday after pulling over a suspected drunken driver, Gustavo Perez Arriaga. Perez Arriaga, a Mexican national, was arrested Friday on a murder warrant in a house near Bakersfield, about 200 miles southeast of where Singh was shot.

Richardson said he had worked a partial day shift before so Singh could stay home on Christmas with his children before working the graveyard shift for the 12-officer Newman police force. The two passed one another, wished each other "Merry Christmas" before the 33-year-old officer headed off for the solo shift.

"You don't think at the time it's going to be the last time you say goodbye," he said.

An image of the suspect in Officer Singh's murder, confirmed to be authentic by California police. (Facebook)

The sheriff leading the investigation blamed California's sanctuary law for preventing local authorities from reporting Arriaga to U.S. immigration officials for two previous drunken driving arrests. If he had been deported, the sheriff said, Singh would still be alive.

"We can't ignore the fact that this could have been preventable," Stanislaus County Sheriff Adam Christianson told reporters, asking why the state was "providing sanctuary for criminals (and) gang members. It's a conversation we need to have."

Perez Arriaga crossed the border in Arizona several years ago and had worked a variety of jobs as a laborer, including at several dairies. The 33-year-old had gang affiliations and multiple Facebook pages with different names, Christianson said.

NEW ARRESTS IN DEATH OF CALIFORNIA POLICE OFFICER; MURDER WEAPON MAY HAVE BEEN FOUND, AUTHORITIES SAY

Richardson told "Fox & Friends" on Sunday he hopes that in regards to the sanctuary law, that people "find this tragedy for what it is."

Illegal alien accused of killing officer, death may have been prevented if it weren’t for California sanctuary policies

"It was a senseless tragedy. It could have been prevented," he said. "Unfortunately we're having this conversation because it was not prevented."

California's sanctuary law limits cooperation between local authorities and U.S. immigration officials and has drawn scorn from the Trump administration. It includes more than 800 exceptions for violent crimes and felonies and bars police from asking people about their citizenship status.

The president tweeted about Singh's murder on Thursday during the manhunt for his killer, saying it was "time to get tough on Border Security. Build the Wall!" The officer's killing came amid a fight between Trump and congressional Democrats over funding for a border wall that's forced a partial government shutdown.

Richardson called the killing a "tremendous blow" for the department, but that the agency has had "incredible support" from other agencies to cover the city's streets because they have not been able to cover the "tough, tough few days" since Singh's slaying.

The chief added that he was hopeful the outpouring of support the department has received in the days after the killing continues to grow.

"It's often talked about the thin blue line, protecting between good and evil," he told "Fox & Friends. "I think we stand on top of the good, that's what holds us up."

Richardson said while there has been negative publicity that may follow law enforcement in recent years, the killing of Singh should serve as a way to remind the community to support local law enforcement.

"It's a profession that is high profile for what we do, many things are criticized about what we do," he said. "We are truly just here, like Ron was, to protect and serve."