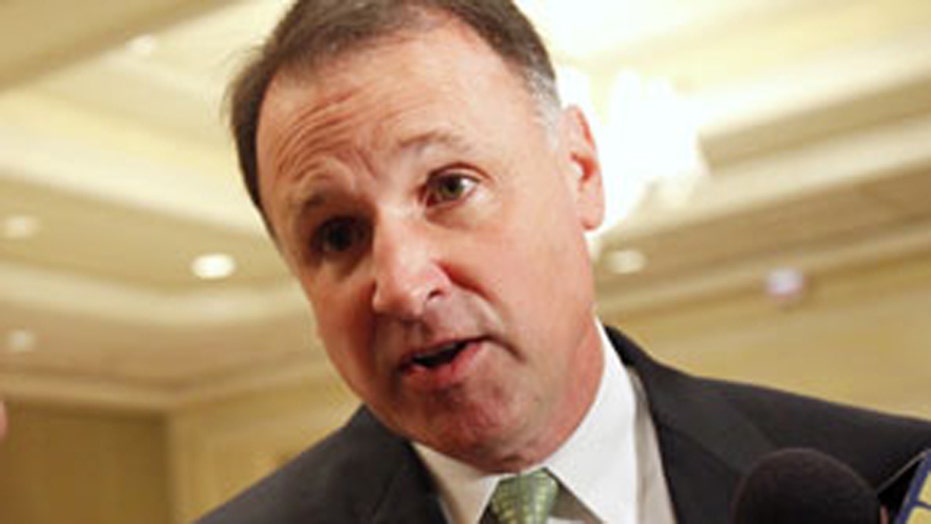 Virginia state lawmaker and onetime candidate for governor Creigh Deeds, stabbed several times inside his home Tuesday, was upgraded to fair condition amid reports his son, who was found dead after the attack, had undergone a mental evaluation 24 hours earlier.

Deeds, 55, was involved in an altercation with his son, Austin, who also goes by the name of Gus, Virginia State Police Public Relations Manager Corinne Geller told a press conference.

Geller said after Deeds was stabbed in the head and upper torso several times, he walked out of his Millboro home and was picked up by a cousin along Route 42. Deeds was transported to a nearby farm and airlifted to UVA Hospital in Charlottesville.

Geller said when authorities arrived at Deeds’ home, they also found Gus Deeds, 24, suffering injuries from a life-threatening gunshot wound. He later died at the scene, Geller said, despite efforts from police and medical responders. Gus Deeds’ body was transferred to a medical examiner in Roanoke, Va., for an autopsy.

An official told the Richmond Times-Dispatch that Gus Deeds underwent a mental health evaluation Monday at Bath Community Hospital, which was performed under an emergency custody order.

Dennis Cropper, executive director of the Rockbridge County Community Services Board, told the newspaper that Gus Deeds was released later that day because no available psychiatric beds could be found in Western Virginia.

Virginia and national Democratic sources who spoke to Fox News cited Virginia law enforcement authorities as alleging that Gus Deeds stabbed his father before shooting himself.

Deeds was initially hospitalized in critical condition but his status was later upgraded to fair.

Police say they are still searching for a motive, but they are not looking for any suspects at this point. Geller said authorities are looking into the events as an attempted murder and suicide.

"It's a very complex investigation," Geller said. She added that police have been able to talk with the senator, but she wouldn't reveal what he said.

Deeds, a former Bath County prosecutor, was elected to the House of Delegates in 1991 and to the state Senate in 2001, in a special election after the death of Emily Couric.

In 2005, he lost a Virginia attorney general race to current Republican Gov. Bob McDonnell, with the margin of victory was fewer than 400 votes out of nearly 2 million cast.

In 2009, he lost again to McDonnell in the governor’s race.

"In this tough and sad time, our thoughts and prayers are with the Deeds family. The news from this morning is utterly heartbreaking,” McDonnell said in a statement. “At this moment, our state unites in prayer for Creigh Deeds and his family."

Deeds, a rural Democrat who drafted a constitutional amendment guaranteeing Virginians' right to hunt, long enjoyed support from the National Rifle Association and other gun-rights advocates.

Deeds and his wife, Pam, divorced shortly after the 2009 campaign.

Gov.-elect Terry McAuliffe called it a sad day for Virginia and the many people who know Creigh.

"We join people across the Commonwealth and country in wishing him a full recovery," he said.