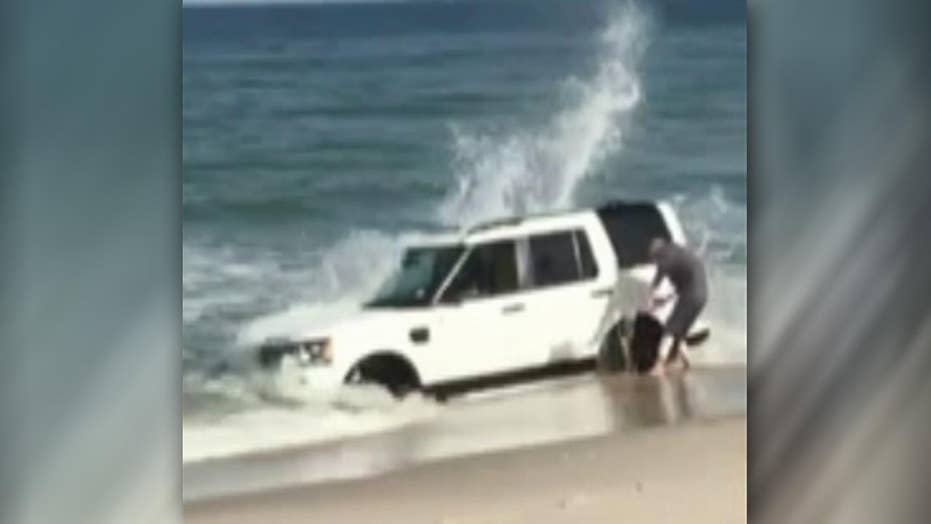 Raw video: Man tries to dig vehicle out of sand on Jersey Shore after attempt to take scenic photographs ends in failure

A man’s trip to the Jersey Shore to take scenic pictures of his SUV was cut short when he was forced to dig his sinking car out from the wet sand.

Video posted to Facebook shows an unidentified 20-year-old using a shovel to try to dig out his sinking Land Rover while waves surround the vehicle.

The driver reportedly visited Island State Beach Park near Toms River, NJ, around low tide. A tow truck, which arrived around the same time as State Park Police, was able to quickly remove the SUV from the water, officials told NBC New York.

The driver ignored suggestions from onlookers that may have prevented some water damage to his car, Christopher Gillich, who posted the video, told NJ Advance Media.

“The kid insisted on leaving it running the entire time in the water. He felt as though if he shut it off, he may never get another one again,” Gillich said. “I told him to at least close the driver’s window. He told me now to worry about it – the truck’s waterproof.”

$3.75 MILLION WORTH OF CAR ENGINES STOLEN FROM FACTORY

The driver insisted on driving the vehicle away after it was towed from the sand, witnesses said, against the apparent advice of the tow truck driver, who reportedly told the driver to immediately bring the SUV to the dealer for a vehicle trade.

Gillich said the Land Rover’s passenger side had dents from waves continually crashing into the vehicle.

Officials said the driver was permitted to drive the vehicle on fishing beaches, and was not ticketed for the ordeal.