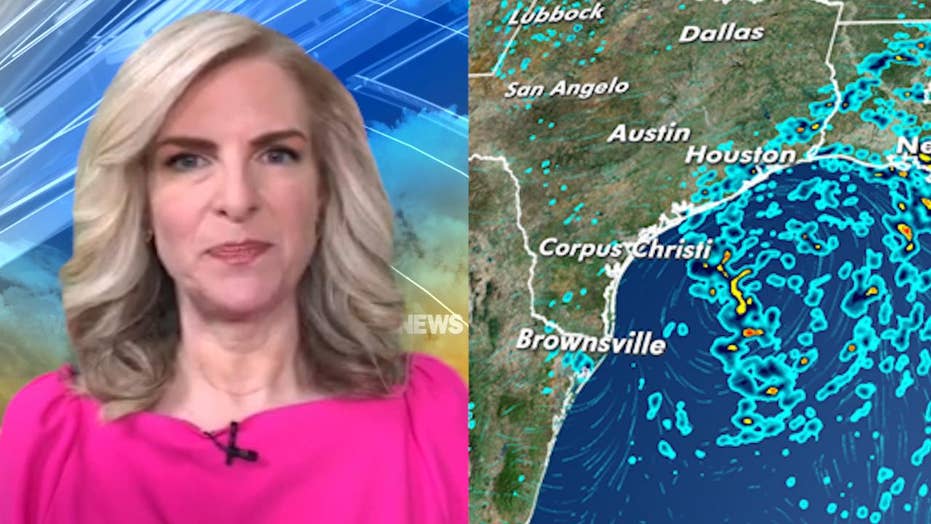 As forecasters monitor what could be the first hurricane of the 2020 Atlantic season over open water, another tropical threat is brewing much closer to the U.S. mainland.

Showers and thunderstorms over the central Gulf of Mexico have developed into Tropical Depression 8, according to the National Hurricane Center in Miami.

As of 2 p.m. ET, the system is about 415 miles east-southeast of Port O'Connor, Texas, with maximum sustained winds of 35 mph as it moves to the west-northwest at 11 mph.

TROPICAL STORM GONZALO FORMS IN ATLANTIC, SETS YET ANOTHER RECORD FOR 2020 HURRICANE SEASON

Slow strengthening is expected and the system is forecast to become a weak tropical storm, named Hanna, in the next day or so.

Tropical Storm Hanna is forecast to make landfall Saturday along the coast in South Texas. Tropical storm watches are in effect along the Texas coast from Port Mansfield to High Island, with conditions expected by Friday night.

Tropical storm watches have been posted along the Texas coast. (Fox News)

The current forecast shows the system will be very weak at landfall.

Heavy showers and thunderstorms will be widespread along the eastern Gulf Coast as Tropical Depression 8 approaches. (Fox News)

Heavy showers and thunderstorms will be widespread along the eastern Gulf Coast with the added risk of flash flooding Friday into the weekend.

According to the NHC, isolated amounts of up to 8 inches of rain are possible, along with life-threatening surf and rip currents along much of the Texas and Louisiana coasts.

Gonzalo poised to be the first Atlantic hurricane of 2020 season

The seventh named tropical storm that formed Wednesday in the Atlantic and set yet another record for the 2020 hurricane season continues to strengthen.

As of Thursday afternoon, the system had weakened a bit, with maximum sustained winds of 60 mph and is about 850 miles east of the Southern Windward Islands, moving west at 14 mph.

The small and compact Gonzalo is moving westward and is forecast to strengthen into a hurricane over the next few days. A hurricane watch is in effect for Barbados as well as St. Vincent and the Grenadines.

Tropical storm-force winds extend only about 35 miles outward from the center of the storm, according to the NHC.

Gonzalo will approach the Windward Islands late Friday and Saturday, possibly as a hurricane, but once it gets into the Caribbean, environmental conditions become pretty harsh, and the storm is forecast to weaken significantly.

It remains too early to gauge whether Gonzalo will survive through early next week.

While seven named storms have developed so far, forecasts call for 13 to 19 named storms during the 2020 Atlantic hurricane season, which runs from June 1 to Nov. 30.

A look at the forecast for the Atlantic hurricane season and what's happened so far as of mid-July, 2020. (Fox News)