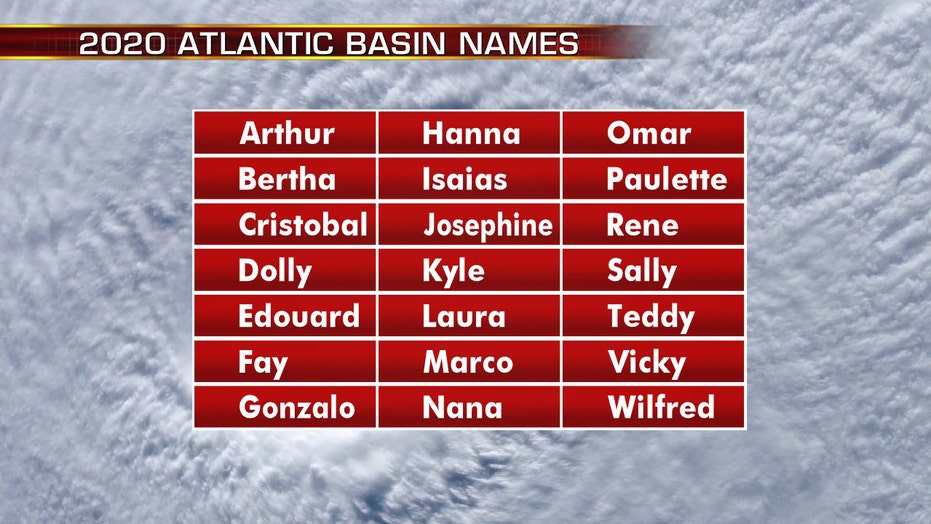 Each year during hurricane season, names of storms either go down in the history books or are never thought of again.

For the 2020 Atlantic hurricane season, forecasters at the National Oceanic and Atmospheric Administration are calling for above-normal activity, with 13 to 19 named storms with winds of 39 mph or higher, of which six to 10 could become hurricanes. Of those storms, there will be three to six major hurricanes, which are classified as Category 3, 4, and 5 with winds of 111 mph or higher.

This forecast is well above the averages of 12 named tropical storms, six hurricanes, and three major hurricanes during the season that runs from June 1 to Nov. 30.

Forecasters at the U.S. National Hurricane Center name tropical storms in the Atlantic from a list maintained and updated through a "strict procedure" by the World Meteorological Organization (WMO).

The international organization chooses hurricane names in advance based on those strict criteria, which are compiled onto six lists used in rotation and re-cycled every six years.

"The only time that there is a change in the list is if a storm is so deadly or costly that the future use of its name on a different storm would be inappropriate for reasons of sensitivity," the NHC states. "If that occurs ... the offending name is stricken from the list and another name is selected to replace it."

Several notable hurricane names such as Katrina, Michael, Rita, Andrew, Maria, and Sandy are among storms who have had names retired.

In the event that more than 21 named tropical cyclones occur in the Atlantic basin in a season, additional storms then will take names from the Greek alphabet.

The last three letters of the alphabet aren't usually needed as there aren't typically that many storms, but the full list was used up in 2005 when a record-breaking 28 named storms hit.

Here are the names for the 2020 Atlantic hurricane season:

The names for the 2020 Atlantic hurricane season.