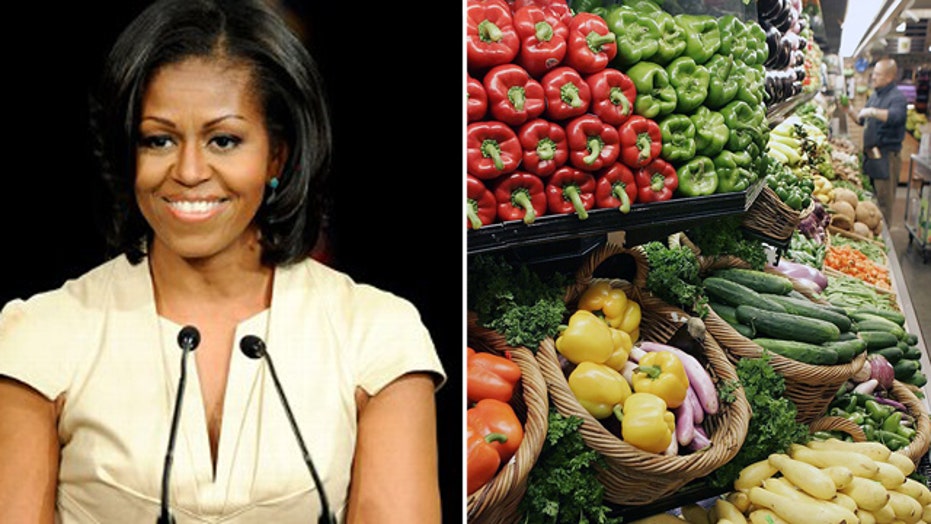 Public schools are continuing to serve the federally mandated fruits and vegetables, but a new study claims the fresh produce is going into trash cans more than tummies.

Since 2012, the U.S. Department of Agriculture has implemented a requirement – widely championed by First Lady Michelle Obama – that children must select either a fruit or vegetable for school lunches subsidized by the federal government. However, a new report published this week by researchers at the University of Vermont found that even though students did add more fruits and vegetables to their plates, as the “Healthy, Hunger-Free Kids Act” enforces, “children consumed fewer [fruits and vegetables] and wasted more during the school year immediately following implementation of the USDA rule.”

The report, entitled “Impact of the National School Lunch Program on Fruit and Vegetable Selection,” noted that average waste increased from a quarter cup to more than one-third of a cup per tray. Observing students at two northeastern elementary schools during more than 20 visits to each, researchers took photos of students’ trays after they chose their items, as they were exiting the lunch line and again as they went by the garbage cans.

“The architects of the Act want their children and schoolchildren across America to eat healthy, hearty meals," Joe Colangelo, director of the product testing and consumer advocacy organization Consumers’ Research, told FoxNews.com. "Unfortunately, our government does not have a perfect record of influencing the eating habits of American citizens.”

“It's this kind of micro-management of our lives that conservatives always warn about and new media claim won't happen."

The study's conclusions jibe with widespread complaints from school officials and parents that the program encourages food waste. It has also drawn criticism for cost, difficulty in implementing and lack of appeal for students.

Parents, not schools, should decide what their children eat, said Dan Gainor, of the Media Research Center

“Schools can't tell what eating disorders or personal preferences each student has,” Gainor remarked. “It's this kind of micro-management of our lives that conservatives always warn about and new media claim won't happen. Until it does.”

A spokesperson for the USDA emphasized that the observation that went into the Vermont study was conducted in 2013, only a year after the program was put into practice, and said several other studies since then have indicated that kids are indeed eating healthier as a result of updated nutrition standards for school meals. A 2014 study by Harvard University’s School of Public Health found that children actually consumed more fruits and vegetables in the wake of the government’s new guidelines.

“Ninety-five percent of schools are successfully serving healthier meals, and in 2014, schools saw a net nationwide increase in revenue from school lunches of approximately $450 million," the USDA spokesperson said in a statement to FoxNews.com. "For those schools still working to implement the standards, we’ve provided training, resources and flexibility."

While a large year-end spending bill passed by Congress last December didn’t pave the way for schools to completely withdraw from the USDA program, it did give them the green light to ease  standards slated to take effect in 2017 regarding whole grains and salt intake. Congress is set to vote next month on whether to re-approve the school lunch initiative.

Despite the backlash, the school lunch regulations have supporters who applaud it as a step in the right direction.

“Without guidelines, we had vending machines with soda, chips and gummy bears and fast food restaurants serving lunch in elementary schools too,” said Stacey Antine, a registered dietician and founder of HealthBarn USA, a program that teaches children to grow their own produce and the importance of healthy eating. “We know that good nutrition is important for learning, good behavior and healthy habits for weight maintenance, so it is important that all children have access to healthy foods.”