The latest bus operation is part of an effort by Abbott to transport illegal immigrants released into border towns to liberal areas with sanctuary city policies in an effort to bring attention to the crisis unfolding at the U.S.-Mexico border.

A group of migrants who arrived on a bus from Texas over the summer are given cheeseburgers as they prepare to take a CTA bus to a Salvation Army shelter in Chicago. Another bus left Texas for Chicago on Thursday, Gov. Greg Abbott said.  (Armando L. Sanchez/Chicago Tribune/Tribune News Service via Getty Images))

"The 300th Texas bus of migrants just left for Chicago," Abbott tweeted. "As Biden does nothing, Texas will continue taking unprecedented action to relieve our overwhelmed border communities & secure the border."

Abbott and other Republicans have criticized the Biden administration for not doing enough to secure the border as record-breaking numbers of migrants continue to overwhelm border agents and the cities in which they are released.

He has touted Operation Lone Star, a joint mission to combat illegal immigration and crime at the border, since the effort launched in March.

In October, he said more than 336 million lethal doses of fentanyl have been seized since it began. In October, more than 64,000 illegal immigrants evaded the Border Patrol while another 205, 000 were apprehended. 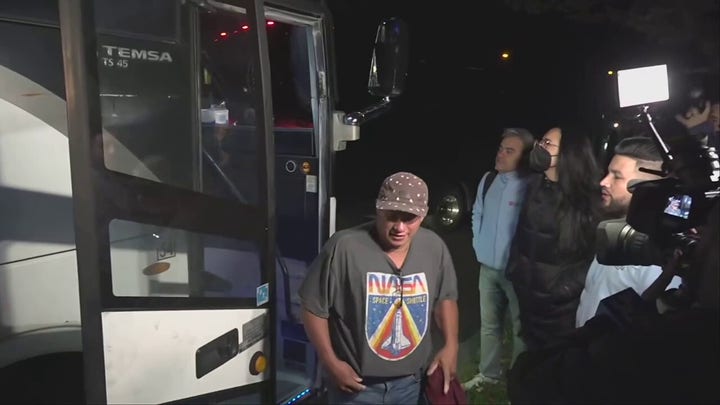 In total, more than 2.3 million migrants were encountered at the southern border during the fiscal year 2022 a record.