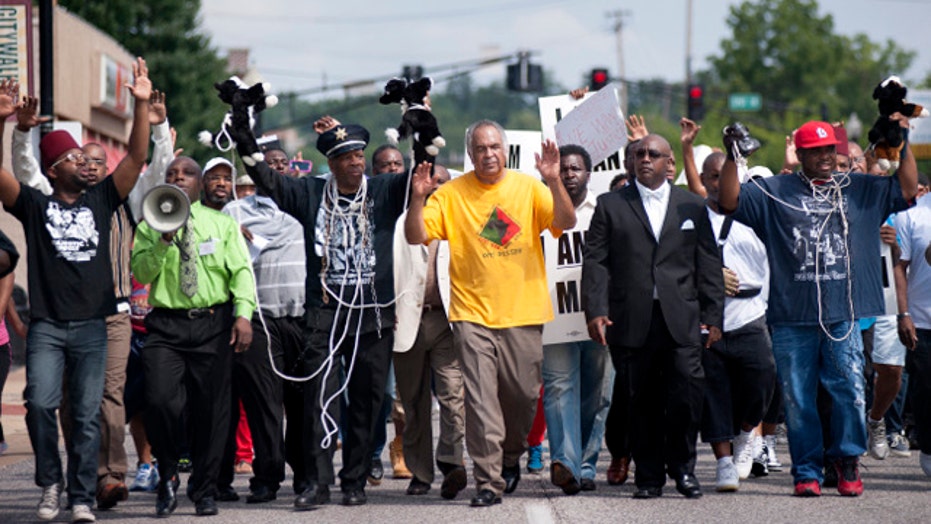 A St. Louis County police officer shot and critically wounded a man early Wednesday morning after he allegedly pulled a handgun on the officer near the site of protests over the death of an unarmed black teenager fatally shot by police last weekend.

Police told the St. Louis Post-Dispatch they received a call about several armed men and reports of shots fired. Police spokesman Brian Schellman said an officer approached one of the men, who pulled a gun, and the officer fired. The man was taken to a hospital. Police told St. Louis Today that they recovered a gun from the scene.

The area has seen several protests since 18-year-old Michael Brown was killed by a Ferguson officer Saturday. Some turned into looting, and police have used tear gas to break up crowds. Community leaders have called for calm, but tensions appear to be increasing.

Rev. Al Sharpton pressed police Tuesday to release the name of the officer who fatally shot an unarmed black teenager in suburban St. Louis, and he pleaded for calm after two nights of violent protests over the young man's death.

President Barack Obama also urged calm, saying people must comfort each other "in a way that heals, not in a way that wounds."

Police said death threats prompted them to withhold the name of the officer, who was placed on administrative leave after fatally shooting 18-year-old Michael Brown in Ferguson, where the incident has stoked racial tension, rallies and a night of looting.

Investigators have released few details, saying only that a scuffle unfolded after the officer asked Brown and another teen to get out of the street. At some point, the officer's weapon fired inside a patrol car, police said.

"The local authorities have put themselves in a position -- hiding names and not being transparent -- where people will not trust anything but an objective investigation," Sharpton said during a news conference in St. Louis where he was joined by Brown's parents.

He also echoed pleas for peaceful protests by the NAACP and Brown's father, Michael Brown Sr., who told the crowd: "I need all of us to come together and do this right. ... No violence."

Police have said there is no security or police video of the confrontation.

Phillip Walker, told The Associated Press he was on the porch of an apartment complex overlooking the scene when he saw a white officer with Brown, who was "giving up in the sense of raising his arms and being subdued." Walker said the officer then "stood over him and shot him."

St. Louis County police are leading the investigation into Brown's death, and the Federal Aviation Administration agreed to order flight restrictions over Ferguson until Monday to give police helicopters unfettered access to that airspace.