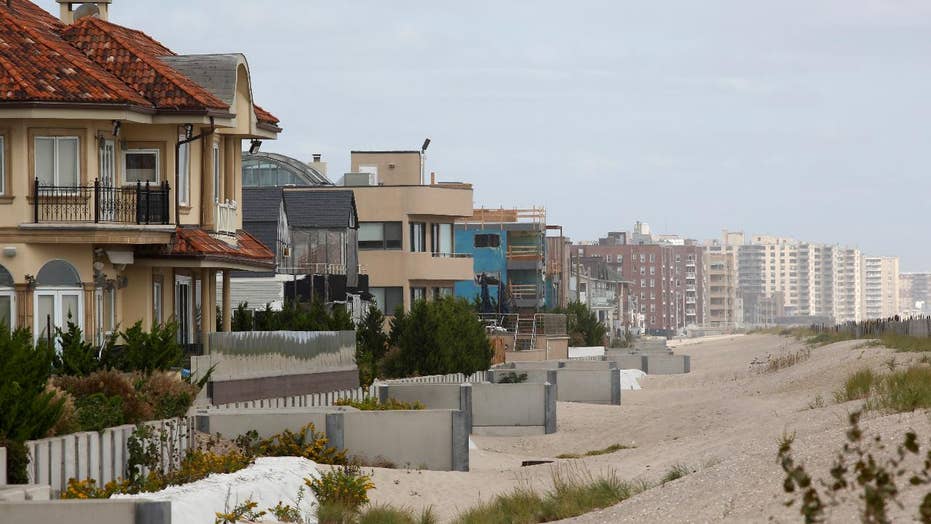 When Superstorm Sandy slammed into the Jersey Shore on Oct. 29, 2012, it ravaged miles of coastline.

The ocean swallowed the beach – swamping neighborhoods that typically didn’t flood – and left vehicles under water and boats on dry land. It cut some house right in half.

More than 100 deaths were blamed on the massive storm, which caused an estimated $65 billion dollars in damages in the U.S.

At the time, New Jersey Gov. Chris Christie said, “The level of devastation is unthinkable.”

Five years later, the boardwalk and pier have been rebuilt, with new thrill rides and thousands of houses have been repaired or replaced.

But the job of rebuilding is far from over.

What the hardest-hit areas look like now; Rich Leventhal has the story for 'Special Report.'

Construction continues up and down the coast, with the governor’s office reporting roughly 1 in 5 homeowners still haven’t moved back into the houses they lost in the storm. Some continue to struggle with insurance claims.

Josette Lata and her husband Ed Okinsky watched the bay fill the first floor of their home during Sandy. They moved back in just a month ago.

"I didn't think it would take five years to fully get back into the house and had I known that I probably would've left," Lata told Fox News.

The couple had no flood insurance and spent $80,000 fixing up the original structure. They found it still couldn’t be insured, so they raise it and built a new, higher house to code with help from a federal grant and another $250,000 out of pocket.

"Every time I see a hurricane in the news, my heart goes out to those people” Lata said. “I feel so sad for them because they don't know what's ahead of them."

But her husband, a retired firefighter turned carpenter, calls it a blessing.

"I built the house and I actually think it's unbelievable where we are at today.  I'm happy, the house is beautiful and for me it was an opportunity to have what we always wanted," Okinsky said.

Locals blame a transformer that blew, igniting one home, with the fire quickly spreading because of the high winds and open gas lines.

More than 100 houses burned to the ground, while flooding damaged or destroyed hundreds more.

Five years later, most of the residents have rebuilt and moved back, including Charlie McLoughlin, who spent summers in Breezy Point for nearly four decades.

He was here the night Sandy roared ashore, escaping to his daughter’s home nearby, watching helplessly as his neighborhood burned to the ground.

"The surge of water from the ocean came up four feet in about a minute,” McLoughlin remembered from his new front porch. “And we must've had about fifty-fire trucks coming in here. They were backed up all the way to the main road and back down, they couldn't get in here because of the surge."

McLoughlin’s 2-inch Colt off-duty revolver was the only thing he could salvage from the rubble melted into nearly unrecognizable pieces of crumbling metal.

He had insurance and rebuilt the house, in part because of his nine kids and 27 grandchildren.

"The kids come up, bathing suit on at 7 in the morning, went to bed the same way!” McLoughlin told Fox News.

The insurance industry says nearly 98 percent of Sandy related claims have been paid out, but that means some are still waiting and far too many never had coverage in the first place.

Michael Barry with the Insurance Information Institute told Fox News: "One of the big issues from Sandy was there were a lot of people who need flood insurance who didn't have it."

"Even if you're seen as being in the low risk area, that doesn't mean no risk."