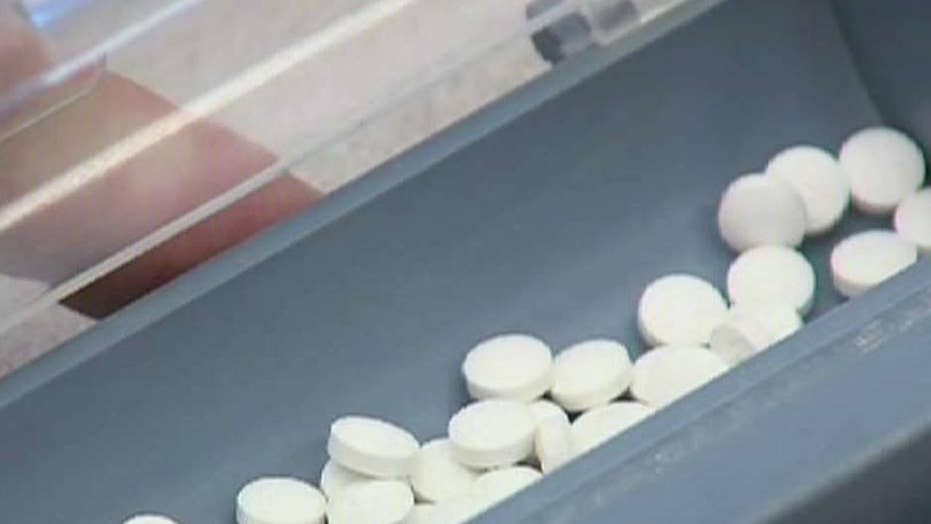 More than two dozen states, cities and counties are suing the makers of prescription painkillers, claiming the industry misled physicians and the public about the risks of addiction.

But those suits, while already filed, may pale in comparison to  litigation to come, as a coalition of states are considering a Big Tobacco-style lawsuit to help pay for the opioid epidemic.

"They promoted the idea that doctors could prescribe these highly addictive painkillers as an effective way to manage chronic pain. And they knew better," said former Arizona Attorney General Grant Woods, who helped lead the state effort to sue cigarette companies in the 1990s.

OPIOID CRISIS: 'WE ARE VERY MUCH AT WAR HERE,' NJ ATTORNEY GENERAL SAYS

He also said the industry has downplayed the addictive nature of its product.

“This is something that we've seen across the country from the most educated, most sophisticated patient to the least,” Woods said. “And we're talking a matter of days not a matter of weeks or months or years. They knew—certainly should have known—that they were going to leave in their wake devastation across this country."

Some believe prescription painkiller makers should have known how highly addictive their products were. (Reuters)

Woods is helping Ohio sue several prescription painkiller manufacturers and is consulting with several others on their upcoming litigation against the same companies.

The basis for their litigation is nearly identical to the strategy used by states against Big Tobacco in the 1990s. Both manufactured a product they allegedly knew to be highly addictive but downplayed the risk to the public. Once hooked, states bore the treatment cost of the resulting public health epidemic.

"I think the responsibility goes to the doctors, goes to the medical rep, goes to the pharmaceutical companies," said Dr. Howard Samuels, founder of The Hills addiction treatment center in Los Angeles.

Fox News spoke to several patients at Samuels’ in-patient facility. All of them told a similar story of receiving a painkiller prescription from their physician for anywhere from 60 to 120 pills of powerful opioids like Oxycontin, Vicodin or Norco. The cause of their pain ranged from an auto accident to a broken ankle.

"My back – I crushed the bottom three vertebrae, then they prescribed me Oxycontin," said a former high school football player from Ohio.

A woman from New Jersey added, "I was getting 120 oxy a month. When I told him my pain persisted after a few hours, he upped by dosage."

Another patient started on Vicodin, but got so addicted he would buy any type of opioid he could find.

"A doctor is the best drug dealer you can ever get," said the native Angeleno. "Once he knew I had the cash I could get anything. My first prescription was $300, and about $150 a week after that. And when one pharmacy started to get suspicious, he told me where to go."

While there is plenty of blame to go around, the 25 lawsuits already filed share similar allegations:

- marketing that downplayed the risk of addiction;

- undisclosed use of paid doctors to promote the benefits of opioids

- use of front groups to “educate” patients, without disclosing a financial relationship with the drug maker.

Woods said key players and key doctors in communities across the country were identified and heavily promoted, then they became fixtures on speaking circuits.

"Now what you have are key influencers saying these pills are safe, safe for long term use,” Woods said. “And then they go to encourage doctors to use these painkillers for uses that they knew could be deadly.”

"Physicians to a great extent took some of this stuff as gospel and did in fact overprescribe," he said. "But their culpability is, in my personal opinion, a component of the culpability of the entire system."

Purdue Pharma, maker of Oxycontin, spent roughly $30 million a year marketing the drug for a decade, according to the federal government. The company has earned about $31 billion in revenue of that single drug. States, burdened by an epidemic that will claim in one year as many deaths as the entire Vietnam War, are hoping the drug industry will help shoulder the cost.

In a statement to Fox News, Purdue said it will "vigorously deny the allegations in the complaints."

The company also said comparing the drug to tobacco use is unfair.

"Unlike tobacco,” the statement said, “our products are medicines approved by the [Food and Drug Administration’, prescribed by doctors, and dispensed by pharmacists, as treatments for patients suffering pain."