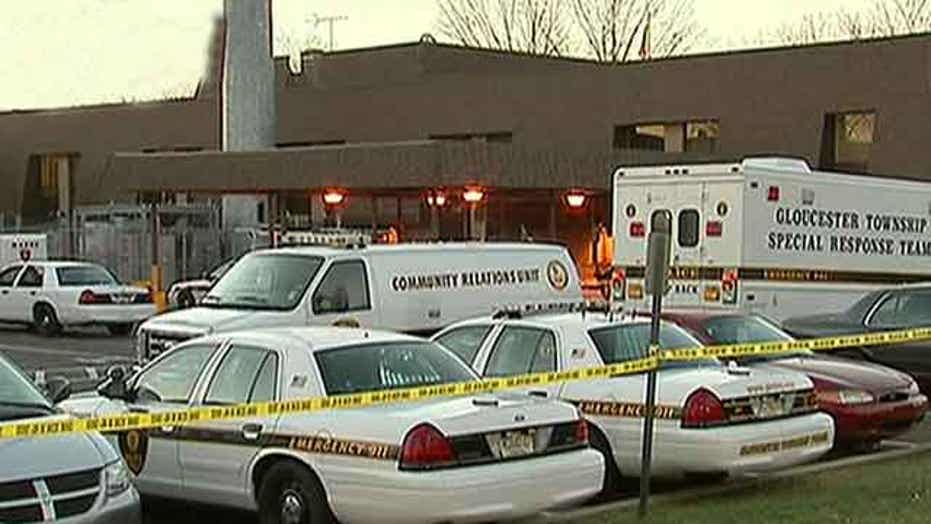 A man who had been arrested for allegedly stalking an ex-girlfriend overpowered an officer inside a police station, grabbed her gun and shot her and two other officers before being killed by police early Friday, authorities said.

All three wounded officers were expected to recover.

Eddie Jones III, 39, of Willingboro, overpowered Officer Ruth Burns inside the station in Gloucester Township, a Philadelphia suburb, police said. He fired at her and two officers who had been in a nearby room and came rushing to aid their colleague. The two officers fired on Jones, killing him.

"This morning, the reality of a cruel world fell upon our doorstep," said Mayor David Mayer. "We thank God our officers are expected to fully recover."

Sgt. James Garber was shot multiple times and underwent emergency surgery for a gunshot wound to the abdomen; his life was saved by a bulletproof vest. He also suffered a graze wound to the head.

Sgt. Kevin Thine suffered a laceration to his abdomen and a graze wound to the chin. Burns was shot in the foot.

Jones, a civilian employee of the New Jersey Department of Corrections, had been arrested for stalking the home of a former girlfriend after a caller told police they saw a suspicious man lurking at about 1 a.m.

He was brought back to police headquarters and when his handcuffs were removed for a brief period during processing, he lunged at Burns, knocking her down and taking her weapon, police Chief Harry Earle said.

The suspect "unleashed a barrage of gunfire" at the officers, Earle said. Jones was struck multiple times by return fire and was pronounced dead at the scene, the chief said.

The shooting will be reviewed by the state attorney general, as is customary with all shootings involving police officers. But Camden County Prosecutor Warren Faulk said initial evidence shows that the officers responded to gunfire that was initiated by the suspect, and returned fire to save their lives and those of other officers in the building.