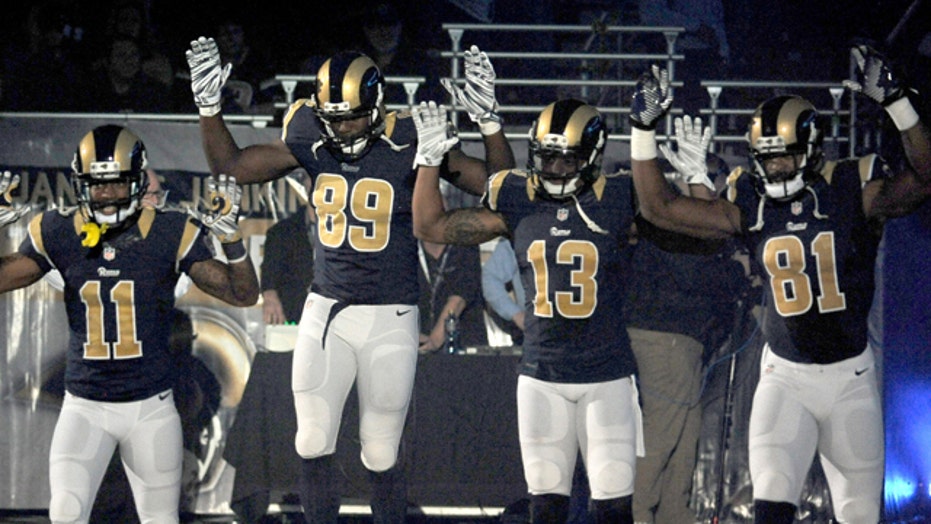 No discipline for players' 'hands up, don't shoot' gesture

A St. Louis Rams official and a county police officer differed Monday about whether the team had apologized for five of its players raising their hands in unison to show support for the Ferguson protesters.

Schellman said Belmar sent an e-mail to the police staff saying Demoff called to "apologize to our department" for the players' actions on Sunday. The email from Belmar said Demoff "clearly regretted that any members of the Ram's organization would act in a way that minimized the outstanding work that police officers carry out each and every day."

However, in an interview with the St. Louis Post-Dispatch Monday, Demoff denied apologizing to the police, but said he regrets and of the offenses the officers may have taken.

"We do believe it is possible to both support our players' First Amendment rights and support the efforts of local law enforcement as our community begins the process of healing," he said.

Jared Cook, Kenny Britt, Chris Givens, Stedman Bailey and Tavon Austin made the "Hands up. Don't Shoot!" gesture protesters in Ferguson — a suburb of St. Louis — have been using since a grand jury did not indict police officer Darren Wilson over the Aug. 9 shooting of Michael Brown, who was black. Some witnesses said Brown had his hands up before being shot by officer Wilson. Wilson, who is white, told the grand jury that he shot Brown in self-defense.

Rams coach Jeff Fisher said Monday that neither the team nor the NFL would discipline the players. He said it was their "choice to exercise their free speech," but he would not comment further on their actions.

"It's my personal opinion, I firmly believe, that it's important that I keep sports and politics separate," Fisher said. "I'm a head coach. I'm not a politician, an activist or an expert on societal issues, so I'm going to answer questions about the game."

Fisher says he plans to talk to his players in a closed-doors meeting.

The NFL responded with a one-sentence statement Monday from spokesman Brian McCarthy: "We respect and understand the concerns of all individuals who have expressed views on this tragic situation."

After the game, the Rams players said they did not mean any disrespect from their actions.

"We just understand that it's a big tragedy and we hope something positive comes out of it," Bailey said, following his five catch 100-yard performance.

Added Cook: "We help build up the people around this community daily with our visiting schools and talking to kids, so coming out and showing that we're unified with the rest of them, it was key to us."