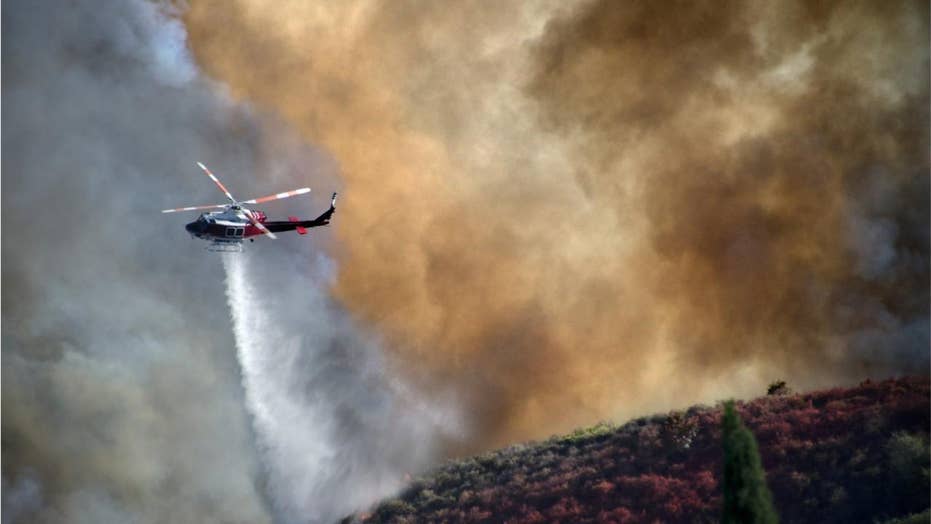 All the elements are in place across Southern California for an extended period of ferocious Santa Ana winds Wednesday, bringing an enhanced threat of explosive wildfires in the region and prompting forecasters to issue their first-ever warning to highlight the fire danger.

The National Weather Service issued a rare "extreme red flag warning" from 11 p.m. Tuesday to 6 p.m. on Thursday for much of Los Angeles and Ventura Counties due to the Santa Ana wind event that "could be one of the strongest of recent memory." A combination of gusts up to 80 mph in mountains and some valleys with humidity levels in the single digits may lead to "a remarkable and dangerous event" across Southern California before conditions improve.

"Fortunately this is the last day but this is also the most dangerous day where we think those Santa Ana winds are going to be ferocious," Fox News Senior Meteorologist Janice Dean said on "Fox & Friends."

"Today is the most extraordinary day for fire danger," Dean added.

The long duration of this wind event may be the worst since October 2007, according to NWS meteorologist Tom Fisher, who told the Los Angeles Times the wind speeds combined with extremely dry air will cause particularly severe conditions.

“It’s kind of like when your skin starts to crack open — it’s going to be that kind of dryness,” Sirard told the L.A. Times. “Very, very dry air coming in.”

Authorities are worried the winds could hurl embers from the smoldering Getty Fire on the west side of Los Angeles and start new fires.

About 9,000 people, including Arnold Schwarzenegger and LeBron James, remained under evacuation orders due to that blaze. City Councilman Mike Bonin said Tuesday that's because experts have analyzed the paths burned by two Santa Ana-spawned disasters — the 1961 Bel Air Fire and the 1978 Mandeville Canyon Fire.

Officials revealed Tuesday the Getty Fire was caused when a dry branch from a eucalyptus tree was flung 30 feet by high winds into a city Department of Water and Power line, which short-circuited and sparked, the utility and Fire Department announced Tuesday. The power line had been operating safely and the DWP had cut away brush and trees from around the line, officials said.

As winds are forecast to pick up in the south, they are expected to ease in the north where fire officials are battling what's currently the state's largest blaze. Hot, dry weather is keeping red flag conditions where the Kincade Fire has burned 76,138 acres and is only 15 percent contained.

The Kincade Fire has destroyed 86 homes and charred an area more than twice the size of San Francisco. About 90,000 buildings remained threatened with more than 150,000 people under evacuation orders.

a Raw video: Footage shot from atop Mount Saint Helena in the Mayacamas Mountains shows a 12-hour time-lapse of the Kincade Fire in California.

A timelapse video taken by ALERTWildFire camera atop Mount Saint Helena in California’s Mayacamas Mountains shows the progress of the blaze from Monday to Tuesday as it continues to burn. Fire crews have said that narrow roads and steep terrain have made it difficult to get to the blaze.

No deaths were reported from the current fires but weekend wind gusts may have claimed three lives.

KSEE-TV in Fresno reported 62-year old Edward Poulson and 59-year-old Iva Maria Poulson died Sunday when a tree fell on their Jeep in a remote area of Madera County. The California Highway Patrol said the tree hit the Jeep, which drove off an embankment and hit other trees as winds hit nearly 30 mph.

The Jeep was found Monday night after the couple's son reported them missing.

The Santa Cruz Sentinel identified a homeless woman who died Sunday after being crushed by a tree felled in high winds as 55-year-old Deseire Quintero.

Firefighters work to douse a flare-up as the Kincade Fire burns through a vineyard in Calistoga, Calif., on Tuesday, Oct. 29, 2019. (AP Photo/Noah Berger)

“This is, unfortunately, now California’s normal,” Cal Fire Capt. Scott McLean said at a Monday briefing. “And it’s absolutely vital that everybody in this state be prepared for these weather events.”