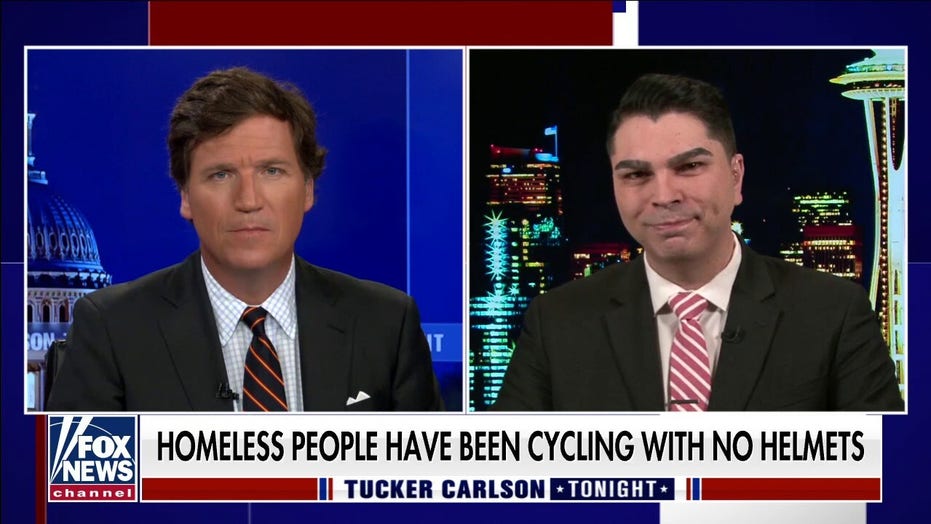 Seattle Radio talkshow host Jason Rantz discusses how Seattle removed the law requiring cyclers to wear helmets while on their bikes because it was ‘racist’ on ‘Tucker Carlson Tonight.’

A man who struck a police officer in the head with a baseball bat during a riot on the streets of Seattle following the decision to charge one of the officers in the death of Breonna Taylor was sentenced to prison on Friday.

Jacob Greenberg was sentenced to five years in prison for attacking Seattle police officer Jose Jimenez after being convicted of ambushing Jimenez from behind with a baseball bat in an attack that was caught on video in 2020, according to KIRO 7.

The impact of the bat put a crack through Jimenez’s helmet and court documents allege that Greenberg had further intent to commit violence by plotting to burn down a police department using Molotov cocktails.

Greenberg, who was 19 at the time the crime was committed, was convicted of first-degree attempted arson, second-degree assault with a deadly weapon and second-degree reckless burning. His 60-month prison sentence will be followed by 18 months of community custody with the Department of Corrections.

As for Greenberg’s sentencing and after negotiations, he was sentenced for first-degree attempted arson, second-degree assault with a deadly weapon and second-degree reckless burning, which resulted in an "exceptional sentence" of 60 months followed by 18 months of community custody with the Department of Corrections.

"My head almost got taken off that night," Jimenez said in court at the sentencing. "That impact that night, I did not feel the repercussions that I’m going to have to live through. I can’t even explain how horrible it felt being at the East Precinct behind that line and just experiencing all that hate."

Seattle's police chief says the wellness of officers " is essential to their ability to provide the type of police service the community expects".

"I don’t know how much worse my headaches might get when I get older," Jimenez added.

Greenberg, who is the stepson of former Democrat Washington State Rep. Laura Ruderman, apologized at his sentencing.

"I take full responsibility of my actions and for that, I want to apologize to you, your honor, and this court," Greenberg said.