As war raged in Vietnam, a quiet effort started by two sorority sisters to show support for the POW and MIA’s shot down in Vietnam took off across America. Many of these POW’s were held for years at the Hanoi Hilton. Students across America began wearing bracelets with the name of an American POW and the date they were shot down. Stars like John Wayne, Princess Grace and Sonny and Cher wore them.

"We and a lot of other Americans have been wearing bracelets like this for several years, and it's just our quiet way of letting them know that we remember the guys, and they are in our hearts," Sonny said on his popular TV show with Cher.

Fox News editor Brad Paxton was one of those kids who sent his $2.50 away to purchase a bracelet. His bracelet honored Navy Lt. Dave Carey, shot down in North Vietnam on Aug. 31, 1967.

"It was a trend that was happening and we kind of wanted to be part of it. It grew to be a much deeper thing for me … after wearing the bracelet for so long, I kind of made a mental commitment to myself to kind of keep his name in my mind," Paxton says.

He estimates about 50% of his junior high school was wearing a bracelet back in the day.

"This was a way to show support for the troops without, in a non-political kind of way. You didn't have to be for the war against the war. You just could be in support of these people who had been captured," Paxton said.

He saved the bracelet in a box of trinkets in his basement. Spurred by a conversation with his wife about the bracelets and how they united the country during a divisive war, he decided to try to find Carey, the man whose name he wore on his wrist when he was in 8th grade.

"I went down and pulled out a box. I knew right where it was and looked it up and then like a lightning bolt, it's kind of like I should just see whatever happened to this guy,’ Paxton said.

VIRGINIA NAVY VETERAN SAYS ALL VETERANS DESERVE THANKS, NOT JUST THOSE WHO SAW BATTLE

He found him in Texas, 80 years old and now an author and motivational speaker. Carey spent five-and-a-half years in the Hanoi Hilton - some of it overlapping with John McCain who was shot down a month and a half after him.

Paxton sent Carey an email and a picture of the bracelet. To his surprise, within minutes Carey emailed him back and said he would love to have it.

Carey told Paxton how much those bracelets meant to him.

Turns out, Carey has been getting emails like Paxton’s for years.

"Those bracelets were incredibly important to us. That kind of lifted our morale and reassured us that the folks at home were working on it," Carey says.

Carey, who retired as a captain, can still vividly recall the day he was shot down.

"The missile went right between us. There was a huge explosion. Fireball blew the tail section of my airplane. The airplane just stayed on its back, starts spinning and tumbling and jirating falling through the sky. It was shaking so bad that it would focus well. I try to see what was going on. It was just a blur." 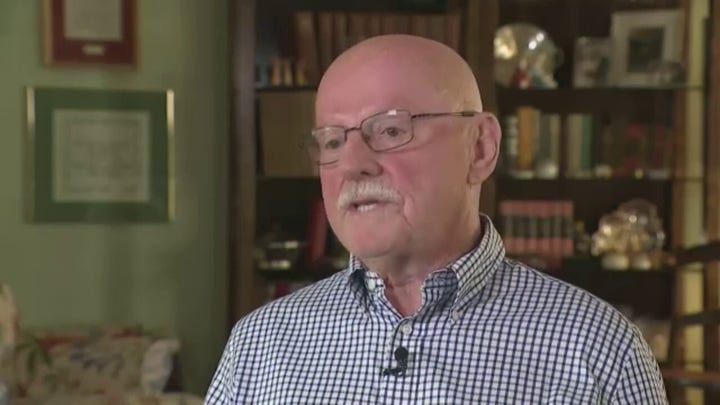 With his plane falling through the sky, Carey got a glimpse of his altimeter and ejected from the plane. His parachute landed in the middle of a small North Vietnamese village. He still remembers the beatings.

"I was interrogated, the interrogation led to beatings, the beatings led to torture," Carey recalls.

"My arms didn't work. My arms that worked for weeks and weeks. I ate by wiggling around on my stomach, stick my face in a bowl of rice."

To help him stay sane, he remembered the first line of the 23rd psalm.

"That line kept coming into my head. … The Lord is my shepherd. I could think about that line."

Carey and his fellow prisoners found other tricks to keep their minds intact.

Carey explained, "I let slip that I had taken French in high school at the Naval Academy, and so I immediately became the French teacher…. That was French, according to me, because there was a lot of stuff I had to make up."

Carey kept his sense of humor through it all.

MEET A MARINE VETERAN ON A PERSONAL MISSION AGAINST SUICIDE

Meanwhile, back in California, the woman who started the bracelet movement, Carol Bates Brown, was a student at California State University Northridge. She and a girlfriend came up with the MIA/POW bracelet concept and tried to convince their parents to let them go to Vietnam.

"Nobody wants to send two sorority girls to Vietnam in the middle of a war. Parents were horrified. So we ended up trying to make our own," Brown said.

She and fellow students got materials donated. One of them came up with the idea of putting names on the bracelets.

Brown thought, "Well, other college kids might want to wear them, too. And when it really took off like it did, it was just shocking and unbelievable."

"At the time, that's what it cost to go to a movie in the UCLA area if you were a student. So we decided if the kids could pay for a movie they would pay for a bracelet," Brown said.

The campaign led to a decades-long career at the Pentagon for Brown at the Defense Intelligence Agency in the office of POW/Missing Personnel.

55 years later, Carey still has the flag airmen carried in their flight suits in case they had to eject.

Carey held it up and read it.

"It says I am a citizen of the United States of America. I do not speak your language. Misfortune forces me to seek your assistance in obtaining food, shelter and protection. Please take me to someone who can provide for my safety and see that I return to my people, my government will reward you," Carey read.

But when they heard kids back home were wearing bracelets with their names on them, that gave them hope that they had not been forgotten.

"We kept our sense of humor. And we kept the faith, faith in ourselves, faith in each other, faith in our country and faith in God," Carey said.

While in captivity, one of the ways this Naval aviator kept sane was by pretending to play the piano. After his release, he finally learned to play on a real piano. Today he still receives mail from kids now grown who wore those bracelets for him and the other POW/MIAs.

GET THE FOX NEWS APP BY CLICKING HERE

"I always knew where the bracelet was. I never forgot his name. Even 50 years later, I can tell you about Lt. David Carey," Paxton said. "He's a genuine American hero. And I'm just humbled and to have had a small footnote in his story."

Carey’s book, "May God Bless Your Choices," draws from his time in captivity. He travels the country, speaking to business leaders, helping them by speaking about his own experience.

His message is this: "They are way stronger, way more resilient, way more resourceful than they ever would give themselves credit for that they just haven't been tested."