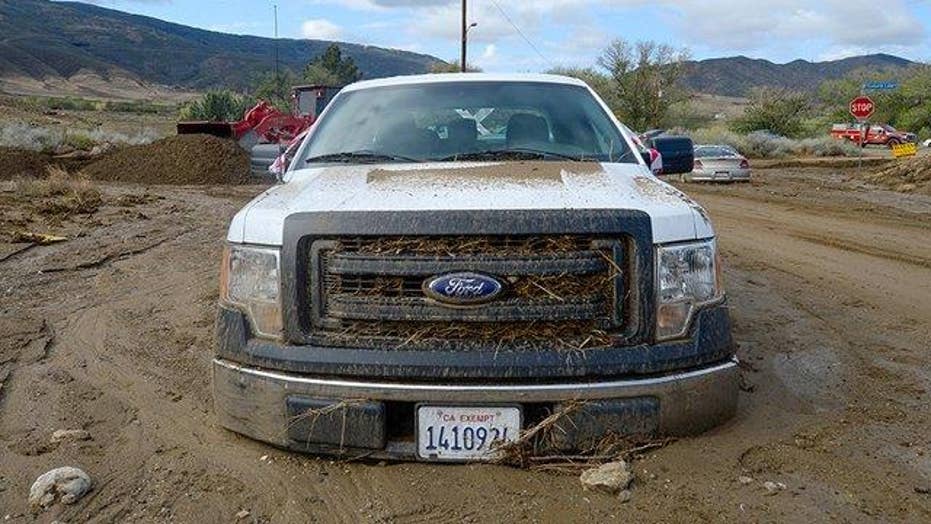 The hillside above the California home of Wayne Socha had held firm against thunderstorms over the past three decades. But after a wildfire two years ago stripped away vegetation and loosened soil, he feared the strong El Nino storms pounding the state could bring it all down.

So the 61-year-old corporate auditor grabbed a sledgehammer and waded through the muck in his Monrovia backyard to knock a hole in a cement wall and let a mud flow skirt his house and run into a street.

"It looked like Niagara Falls," Socha said. "It was quickly building up behind the house and I knew it could come right inside."

Socha is among uncounted Californians trying to protect their property after the first El Nino storms descended this week and brought wet, windy weather to an area stretching all the way to the Gulf Coast.

Those storms dumped nearly 3 inches of rain Tuesday on Southern California, turning Socha's terraced backyard into a raging torrent of mud and debris. He kept his sledgehammer and shovels close on Wednesday as the winter's most powerful El Nino storm so far pushed into the state.

The system pushed south toward Los Angeles, stirring high waves in the ocean and causing extensive flooding in the San Fernando Valley that swamped cars in deep water.

It packed colder temperatures, stronger winds and heavier rainfall than the previous storms that have lined up since the weekend and brought much-needed rain to the drought-stricken state.

In all, the current storm was expected to dump as much as 3 more inches of rain in coastal and valley areas and up to 4 inches at higher elevations, National Weather Service meteorologist Curt Kaplan said.

Another less-powerful El Nino storm was right behind and expected to hit land Thursday.

Los Angeles authorities spent days getting homeless people from low-lying areas along the Los Angeles River and other waterways prone to flooding. Shuttles were available to shelters that had room for as many as 6,000 beds, Los Angeles Mayor Eric Garcetti said.

"We're not going to charge them with things," Garcetti said. "But we will use the force of law — there is law on the books that they can't be there."

Motorists in mountain areas were warned that blizzard conditions with wind gusts reaching 60 mph were possible above 4,000 feet.

At the foot of the San Gabriel Mountains, Monrovia officials dispatched crews with sandbags to help protect Socha's neighborhood from landslides. That eased his mind somewhat, but he said he and his wife were vigilantly watching forecasts of several more inches of rain.

The National Weather Service said a record 1.42 inches of rain fell Tuesday at Los Angeles International Airport as a previous storm passed through the region.

San Diego Fire-Rescue crews responded to 75 calls in three hours Tuesday. Most dealt with cars in flooded intersections, including instances in which a woman and her dog were pulled to safety and a family of four was rescued from their vehicle as waters swiftly rose.

Northern Arizona residents woke up to a winter wonderland on Wednesday and forecasters warned of a lot more snow in the coming days. Several major roadways closed temporarily because of a rock slide, crashes and slippery conditions.

Despite the potential for flooding and mudslides, the wet weather in California was welcome news for the state suffering from a severe drought. But officials warned residents against abandoning conservation efforts and reverting to wasteful water-use habits.

California's water deficit is so deep after four years of drought that a steady parade of storms will be needed for years to come, said Mike Anderson, climatologist for the state Department of Water Resources.

The current El Nino system — a natural warming of the central and eastern Pacific Ocean that interacts with the atmosphere and changes weather worldwide — has tied a system in 1997-1998 as the strongest on record.