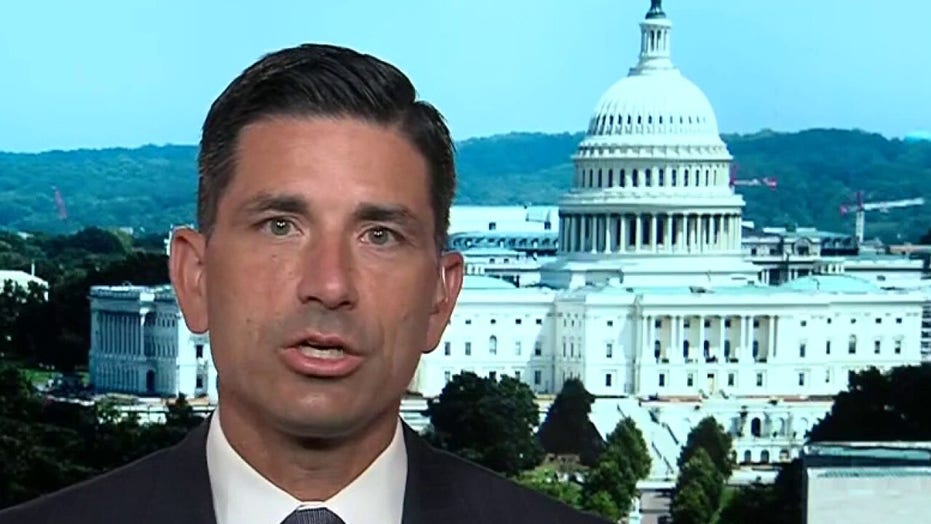 Federal officers were seen in a video that has since gone viral striking a Navy veteran with a baton and firing tear gas at him when he failed to pull back from a federal courthouse in Portland, Ore., Saturday night.

Christopher David, 53, was seen standing with his arms at his side in front of a group of federal officers outside the Mark O. Hatfield Courthouse Saturday night. One federal officer strikes him at least three times with a baton before another uses a can of pepper spray on his eyes, according to a video of the incident first shared by Portland Tribune reporter Zane Sparling.

David, wearing a white sweatshirt with the word Navy written across, a mask and a black backpack, walks away from the federal officers, flipping them the middle finger. The 11-second video clip has since been viewed more than 9.5 million times.

David, a Portland resident who served in the U.S. Navy for more than eight years, said he took the bus downtown to join protesters and looked for federal officers before he “stood in the street in front of them and I started asking them if it was OK to violate their oath of the Constitution.”

“I stood there with my hands down by my sides and they just started whaling on me,” he told KOIN.

“They kept hitting me with batons and I think they decided that wasn’t going to work, so the two pepper spray hits I think I took, and that ended that,” David told the station in a phone interview. “That was not fun, so I flipped them off and walked to the corner of the park as best I could and I was losing my vision. I was walking through a giant cloud of CS gas.”

Using the name “Tazerface” on Twitter, David said his vision was temporarily impaired but he managed to make his way to a park bench before a “street medic angel” called Tav came to pull him to safety and called for an ambulance.

David has been championed as “Captain Portland” and likened to other superheroes on social media. He said he fractured his hand and might require surgery.

“All these academy grads are reaching out. They are playing me up as an Iron Man and a Superman,” David told KHON. “I’m a 53-year-old overweight man on blood thinners and I have a lot of physical damage from the military. So, I’m not made of steel at all. They could have killed me last night, as my ex-wife and daughter have reminded me 45 times this morning.”

A large crowd gathered downtown near the Justice Center and Federal Courthouse and people tore down fences around Chapman Square Park and Lownsdale Square Park, which had been put in place recently when the parks were closed for repairs, according to the police press release.

Demonstrators tore down fencing and used it to create barricades around the courthouse. Federal officers came outside to address the crowd. People also lit a bonfire in the ruins of the Elk statue base and other small garbage can or street fires. At times people gathered up on the east side of the Justice Center and blocked the gate to the jail and banged on the lobby doors, the press release said.

Police said protesters across town had also broken into the Portland Police Association building and started a fire. Portland police officers were in north Portland and did not respond to the courthouse.

Local and state leaders have voiced their displeasure with the presence of federal agents in the city that has seen demonstrations every day since the death of George Floyd in Minneapolis nearly two months ago. Federal officers from U.S. Customs and Border Protection, U.S. Immigration and Customs Enforcement, and the Department of Homeland Security‘s Federal Protective Service were called in about three weeks ago as part of the Trump administration’s efforts to “quell” civil unrest.

Speaking on CNN’s “State of the Union,” Democratic Mayor Ted Wheeler said on Sunday that federal officers “are not wanted here. We haven’t asked them here. In fact, we want them to leave.”

Democratic leadership in the House of Representatives said Sunday they were “alarmed” by the Trump administration’s tactics against protesters in Portland and other cities, including Washington, D.C.

They are seeking an investigation “into the use of federal law enforcement agencies by the Attorney General and the Acting Secretary of Homeland Security to suppress First Amendment-protected activities in Washington, D.C., Portland, and other communities across the United States.”

President Trump has decried the demonstrations, and Homeland Security Secretary Chad Wolf blasted the protesters as “lawless anarchists” in a visit to the city last Thursday.

“We are trying to help Portland, not hurt it,” Trump tweeted Sunday. “Their leadership has, for months, lost control of the anarchists and agitators. They are missing in action. We must protect Federal property, AND OUR PEOPLE. These were not merely protesters, these are the real deal!”

Oregon Attorney General Ellen Rosenblum sued Homeland Security and the Marshals Service in federal court late Friday. The complaint said unidentified federal agents have grabbed people off Portland’s streets “without warning or explanation, without a warrant, and without providing any way to determine who is directing this action.”