The topic of policing and law enforcement was one of many to make headlines over the course of 2021, at times dominating the front pages with stories ranging from the trials of former police officers Derek Chauvin and, most recently, Kim Potter; to the tragic deaths of those who succumbed to Covid-19-related illness.

The year 2021 in police-related news was, in some cases, a continuation of the stories that persisted through parts of 2020. Here is a look at some of the biggest police stories of 2021:

Police attacked during January 6 riots at the U.S. Capitol 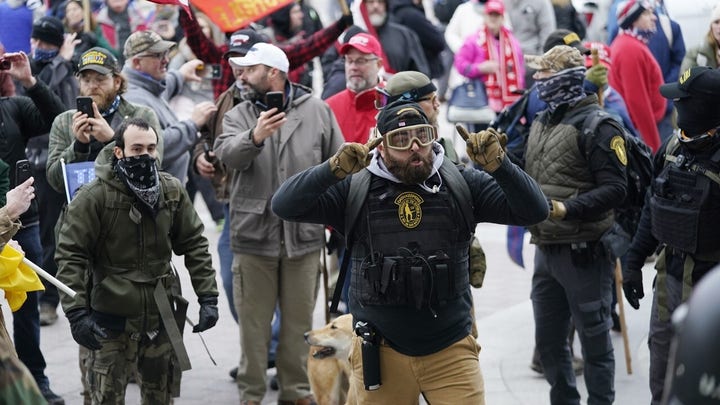 Police were involved in the January 6 riots at the U.S. Capitol in Washington, D.C. in a number of ways – with many working the event that devolved into chaos and bloodshed and others as members of the crowd.

On Jan, 6 as Congress was meeting to certify the victory of Joe Biden, hundreds of President Trump’s supporters who claimed the election had been stolen violently pushed past police, broke through windows and doors and entered the Capitol, forcing legislators to interrupt their work and flee. Those whose work was upended included Vice President Pence, who was presiding over the Senate and had to hide from rioters who were calling for his hanging.

Law enforcement agents were "being pulled into the crowd and trampled, assaulted with scaffolding materials, and/or bear maced by protesters," wrote Arlington County firefighter Taylor Blunt in an after-action memo obtained by The Associated Press. Some couldn’t walk, and had to be dragged to safety. 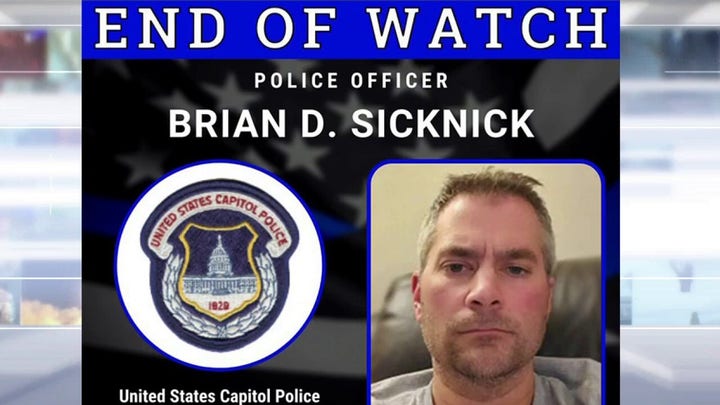 Blunt was one of the few medics on the Capitol steps on Jan. 6, trying to triage injured officers during the riots.

A Capitol Police officer collapsed and died after engaging with rioters who descended on the building. A medical examiner later determined he died of natural causes. Many other officers were injured.

Ashli Babbitt, a U.S. Air Force veteran from California, was shot to death by Capitol Police, and three other people died after medical emergencies during the chaos. In the weeks and months that followed, four of the officers who responded to the riot took their own lives. 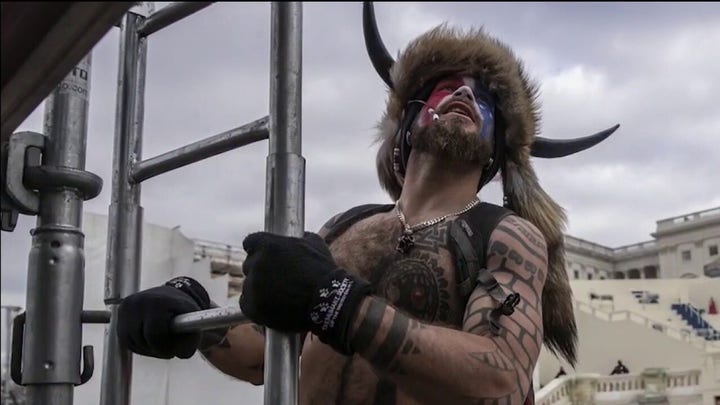 A House committee is now investigating the origins of the attack and what Trump did — or didn’t do — to stop it. 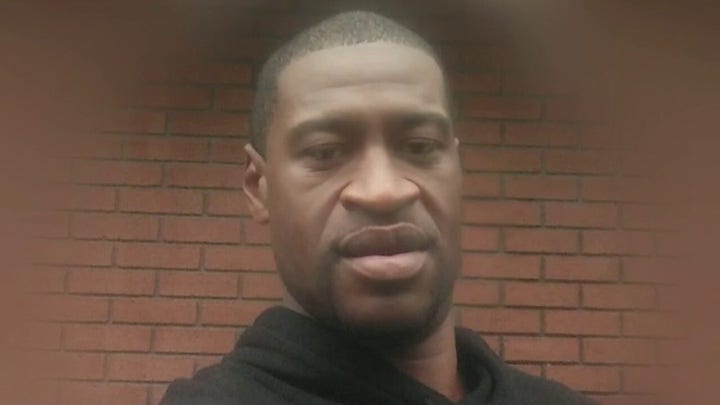 Floyd, a 46-year-old Black man, died on May 25, 2020, after Chauvin held his knee against his neck or upper body for nine minutes and 29 seconds, as a handcuffed Floyd repeatedly said that he could not breathe.

Chauvin was later fired from the department. During the trial, the jury heard from some of Chauvin’s former colleagues, including Minneapolis Police Chief Medaria Arradondo, who said Chauvin violated departmental policy — and went against "our principles and the values that we have" — in pressing his knee on Floyd’s neck and keeping him down after Floyd had stopped resisting and was in distress. 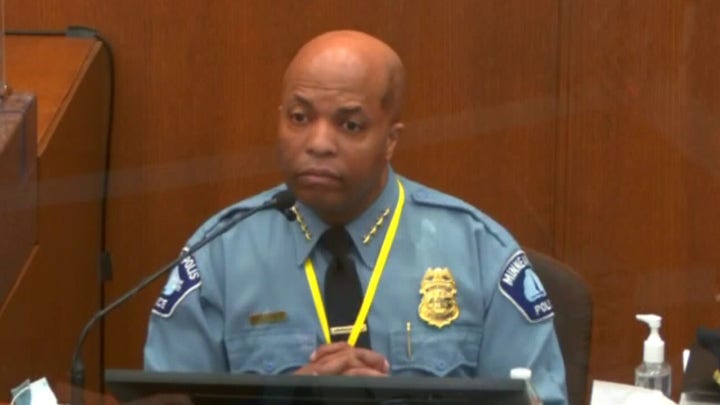 Chauvin was ultimately convicted on all three charges. He was sentenced to 22 and a half years.

In his federal plea, he admitted he willfully deprived Floyd of his right to be free from unreasonable seizure, including unreasonable force by a police officer, by kneeling on Floyd’s neck even though he was handcuffed and not resisting. A second federal count in Floyd’s death was dismissed, but Chauvin pleaded guilty to another count in an unrelated 2017 case. 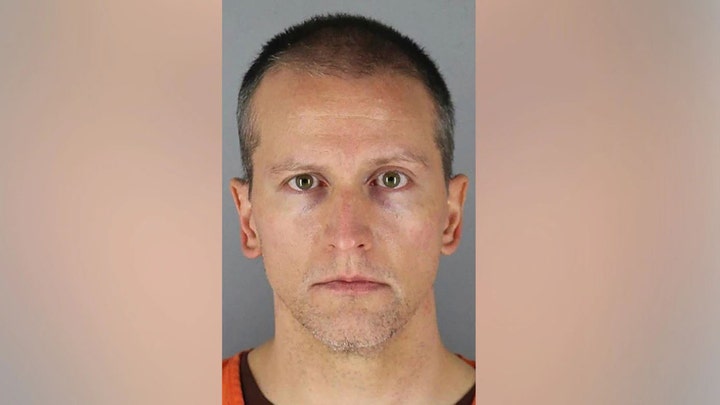 Chauvin also pleaded guilty to violating the rights of a 14-year-old boy during a 2017 arrest in which he held the boy by the throat, hit him in the head with a flashlight and held his knee on the boy’s neck and upper back while he was prone, handcuffed and not resisting. 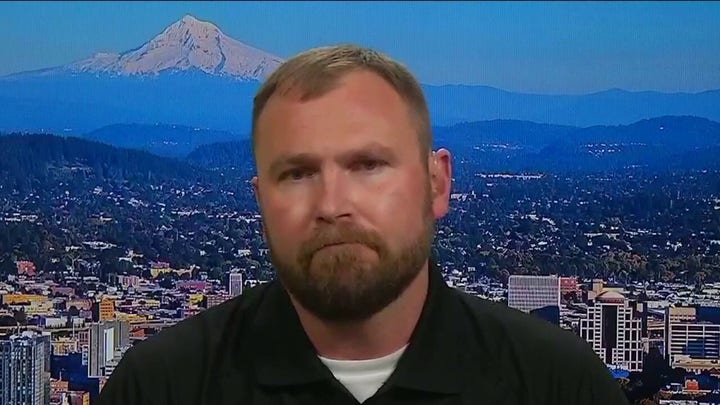 In June, a team of 50 police officers who served on a specialized crowd-control unit in Oregon and responded to Portland’s ongoing, often violent protests have resigned en masse after a team member was indicted on criminal charges.

Officers, detectives and sergeants on Portland Police Bureau’s Rapid Response Team voted to resign from the team because of a perceived lack of support from City Hall and from the district attorney over the past year, the mayor’s office and officers said at the time.

The move by officers to disband their own team came a day after Officer Cody Budworth was indicted and accused of fourth-degree assault stemming from a baton strike against a protester in the summer of 2020.

"I don’t think it is just an indictment that caused this to happen, I think it is a very long complicated history of things that have gone on over the last 14 months," Acting Portland Police Chief Chris Davis said at the time.

Davis told reporters that while the officers on the unit had been "left their voluntary positions and no longer comprise a team," they will continue with their regular assignments.

The Rapid Response Team is an "all-hazard incident" unit that responds to natural or man-made disasters, large-scale searches and, most recently, public order policing or riots. Members of the team are trained in advanced skills related to crowd management, crowd psychology and behavior, team formations and movements, the use of enhanced personal protective equipment, use of force, and de-escalation and arrests.

In the summer of 2020, when Portland became the epicenter of Black Lives Matter protests following the murder of George Floyd, the team was on the front lines. 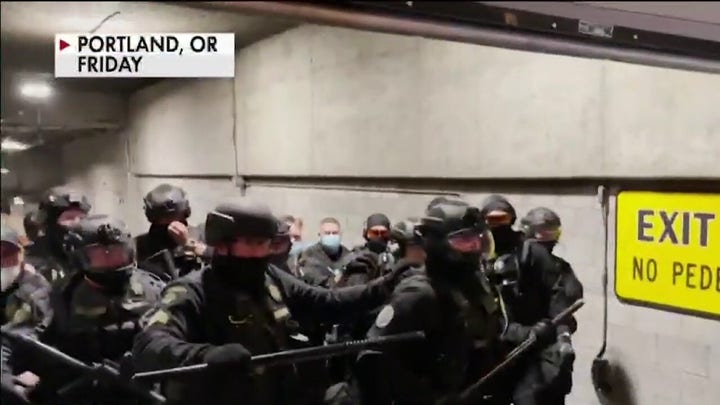 Many demonstrations devolved into clashes with officers late at night, and at times ended with vandalism, property damage and fires. The crowd-control team was the unit often directed to disperse groups after police declared unlawful assemblies or riots.

"Our entire organization has been put through something none of us have ever seen through our careers — and at a level and intensity that I don’t think any other city in the United States has experienced," Davis said.

In late October 2020, the president of the police union, the Portland Police Association, sent the mayor and police chief a letter, urging both to "stand up and publicly support Police Bureau members who voluntarily serve on the Rapid Response Team."

"Our RRT members do not volunteer to have Molotov cocktails, fireworks, explosives, rocks, bottles, urine, feces and other dangerous objects thrown at them," wrote Daryl Turner, then-president of the union. He noted that the team members volunteered for the work without any specialty pay. 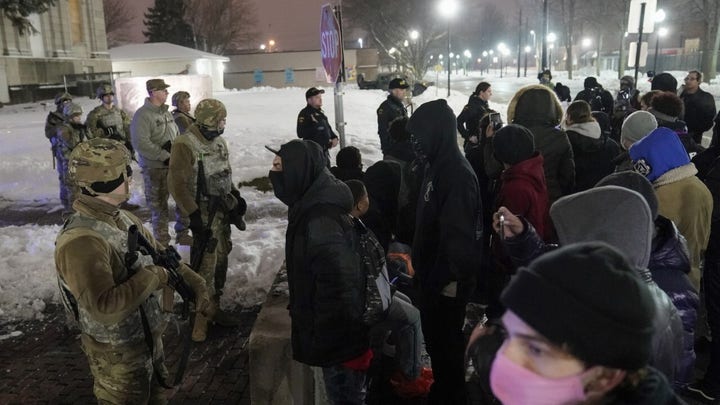 In October, federal prosecutors announced that they would not file charges against a white police officer who shot Jacob Blake in Kenosha, Wisconsin, in 2020 – a shooting that sparked protests that led to the deaths of two men.

Officer Rusten Sheskey shot Blake, who is Black, during a domestic disturbance in Kenosha in August 2020. The shooting left Blake paralyzed from the waist down and sparked several nights of protests, some of which turned violent.

Sheskey and other officers encountered Blake after they responded to a call from a woman who reported that her boyfriend wasn’t supposed to be at her home. When they arrived at the scene the woman told them that Blake was trying to take her kids and her SUV. 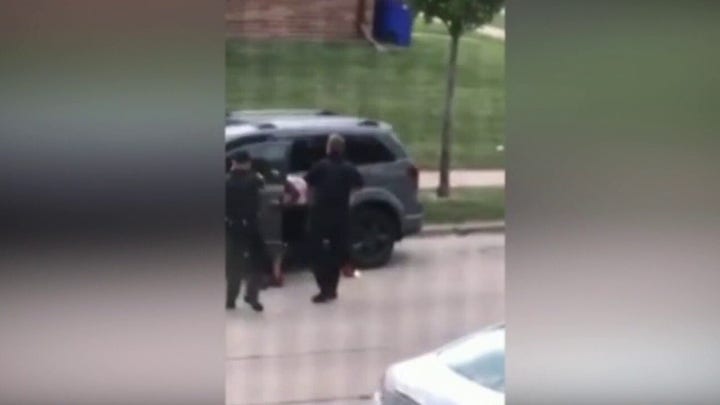 Blake fought the officers as they tried to take him into custody. Sheskey and another officer tried to shock him with their stun guns to no avail. Blake tried to get into the SUV with his young children in the backseat, prompting Sheskey to grab his shirt. Sheskey told investigators that he was afraid Blake would drive off with the children or use them as hostages.

State prosecutors decided not to file charges against Sheskey earlier this year after video showed that Blake, who was wanted on a felony warrant, was armed with a knife.

The U.S. Department of Justice launched its own investigation days after the shooting. The agency ultimately announced that a team of prosecutors from its Civil Rights Division and the U.S. attorney’s office in Milwaukee reviewed police reports, witness statements, dispatch logs and videos of the incident, and determined there wasn’t enough evidence to prove Sheskey willfully used excessive force or violated Blake’s federal rights.

"Accordingly, the review of this incident has been closed without a federal prosecution," the Justice Department said in a news release. 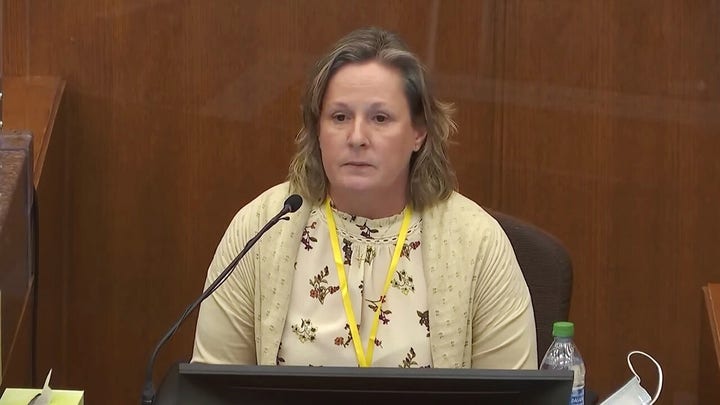 Former Minnesota police officer Kim Potter was convicted on Dec. 23 of first- and second-degree manslaughter in the April death of Daunte Wright.

Potter, 49, was charged for fatally shooting 20-year-old Wright during a traffic stop in Brooklyn Center, a Minneapolis suburb, on April 11. The 26-year police veteran and other officers, including a trainee, were attempting to arrest Wright when he tried to get back into his vehicle, video shows.

The officers had attempted to stop Wright and then tried to detain him after learning of a warrant for his arrest. Wright, 20, can be seen in a police video climbing back into the driver’s seat of a vehicle as the officers scuffle with him.

In Potter’s body camera footage from the shooting, she can be heard yelling, "I’ll tase you!" and "Taser! Taser! Taser!" before firing her handgun.

Potter testified for about three hours before the defense rested its case. She has said she mistook her handgun for her Taser when she opened fire.

She is scheduled to be sentenced in February 2022 and faces up to 15 years in prison for first-degree manslaughter and up to 10 years for second-degree.

The prosecution has said they'll seek an upward departure from sentencing guidelines due to aggravating factors, arguing that Potter's actions were a danger to others and that she abused her authority as a police officer. 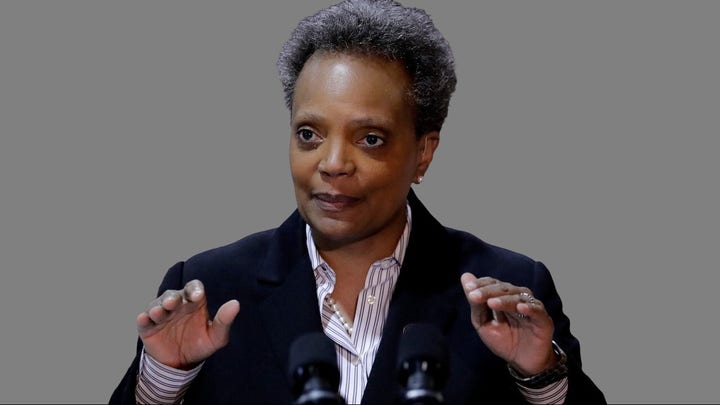 Medical officials reported a surge in COVID-19 cases in late December, with a worldwide uptick believed to have been driven by a new omicron variant.

It was the latest blow to hospitals, police departments, supermarkets and other critical operations struggling to maintain a full contingent of front-line workers as the pandemic enters its third year.

But 2021 was also a time when some police officers and other first responders in states such as New York City and Chicago tried to resist vaccine requirements that threatened their jobs and, in turn, their livelihoods.

A healthcare worker administers a dose of the Moderna Covid-19 vaccine to a person in a vehicle at a drive-thru vaccination site at the Meigs County fairgrounds in Pomeroy, Ohio, U.S., on Thursday, March 18, 2021.  (Getty Images)

The national debate over vaccine requirements has created a fraught situation for the nation’s first responders, who are dying in larger numbers but pushing back against mandates.

As of September, at least 132 members of law enforcement agencies were known to have died of COVID-19 in 2021.

In the first half of 2021, 71 law enforcement officials in the U.S. died from the virus — a small decrease compared to the 76 who died in the same time period in 2020, per data compiled by the National Law Enforcement Officers Memorial Fund. Last year, the total figure was 241 — making the virus the leading cause of law enforcement line-of-duty deaths. 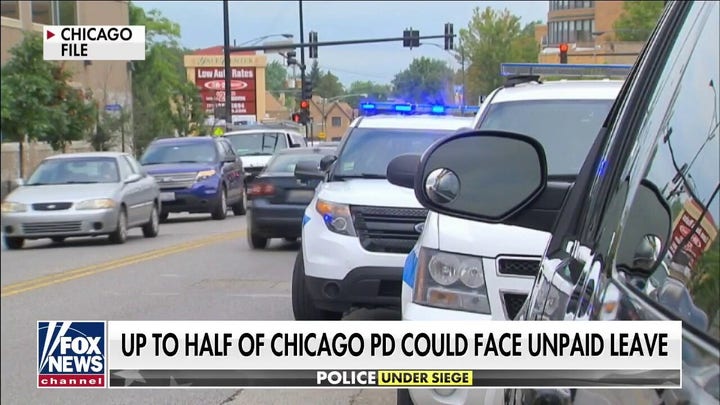 Meanwhile, Chicago Fraternal Order of Police has been engaged in a bitter battle with Mayor Lori Lightfoot over the vaccine mandate, which called for city workers to report their vaccination status by a certain date or be placed on unpaid leave.

A Cook County judge suspended the Dec. 31 vaccination deadline for police and sent the issue to arbitration, which begins Dec. 27.

New York City imposed similar requirements in October, ordering its entire municipal workforce, including police officers, to be vaccinated against COVID-19 or be placed on unpaid leave. 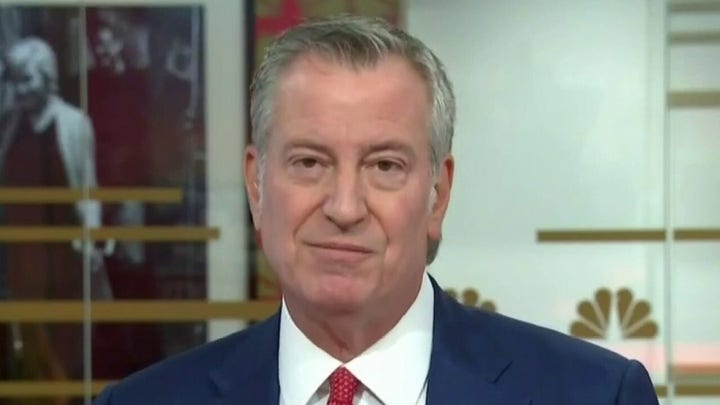 Several unions castigated the mandates as unfair and vowed to sue.

New York City’s largest police union, the Police Benevolent Association, said getting vaccinated is a "personal medical decision" that officers should make in consultation with their doctors.

"Now that the city has moved to unilaterally impose a mandate, we will proceed with legal action to protect our members’ rights," said its president, Pat Lynch, at the time.

Fox News’ Danielle Wallace contributed to this report, as well as The Associated Press.