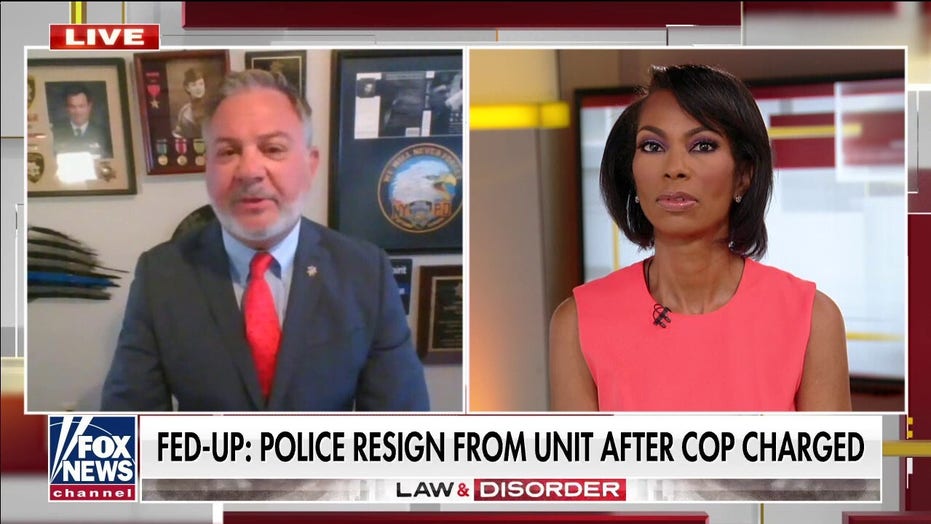 Retired Las Vegas police lieutenant Randy Sutton on officers resigning from Portland's rapid response unit after an officer was indicted for use of force during a riot.

All 50 of the Portland Police Bureau’s highly trained rapid response unit officers resigned this week after the recent indictment of Officer Corey Budworth for allegedly assaulting a photographer during an overnight riot last summer.

"Unfortunately, this decorated public servant has been caught in the crossfire of agenda-driven city leaders and a politicized criminal justice system," the Portland Police Association said Tuesday after a Multnomah County grand jury charged Budworth with one count of fourth-degree assault related to the Aug. 18, 2020, incident.

That night, according to the police union, about 200 demonstrators – many equipped with tactical helmets, faces covered, and armed with a variety of weapons – descended on the Multnomah Building in southeast Portland. Multiple dumpsters were set on fire, buildings were defaced, and windows were broken. A riot soon was declared at the planned event after someone from the crowd launched a Molotov cocktail into the building, setting it ablaze.

"After nearly 75 consecutive nights of violence, destruction, and mayhem, a small group of RRT (Rapid Response Team) officers — including Officer Budworth — were again tasked with dealing with the riot," the Portland Police Association said. "Per PPB Command Staff orders, RRT officers cleared the rioters from the area to allow the Fire Bureau to extinguish the blaze. But the rioters were not satisfied."

According to the union, rioters regrouped and began marching back toward the building. As the Rapid Response Team was working to clear the area, Officer Budworth "was forcefully knocked to the ground" and officers deployed pepper spray and less lethal munitions as the crowd grew more aggressive.

Several rioters interfered with an officer attempting to place one person under arrest.

"RRT officers, including Officer Budworth, used their Police Bureau-issued batons to try and stop the crowd’s criminal activity," the union’s description of events continued. "Per his training and in response to the active aggression of a rioter interfering with a lawful arrest, Officer Budworth used baton pushes to move a rioter, now known to be Teri Jacobs, out of the area."

Riot police run towards protesters in Portland, Oregon, U.S. April 16, 2021, in this still image taken from a video. (Reuters)

Jacobs, an activist and photographer, fell to the ground. Cell phone video showing Budworth striking Jacobs in head from behind quickly circulated on social media. But the union said the blow to the head was an accident on the officer’s part and he used the lowest level of baton force.

"Reasonably believing that she was getting back up to re-engage in her unlawful activities, Officer Budworth employed one last baton push to try and keep her on the ground, which accidentally struck Ms. Jacobs in the head," the union said. "The location of Officer Budworth’s last baton push was accidental, not criminal. He faced a violent and chaotic, rapidly evolving situation, and he used the lowest level of baton force — a push; not a strike or a jab — to remove Ms. Jacobs from the area."

A Portland Police Bureau (PPB) statement indicated that the resignations were effective Wednesday, and it's unclear what implications would be for law enforcement response to future demonstrations in Portland.

Sources told the Post Millennial that the police bureau doesn’t have enough patrol officers to be pulled from the roads in order to handle large crowds. Riot teams usually prepare for large protests, and then patrol officers from three precincts are on standby once the event starts for back-up. Police only respond to priority calls, such as active assaults or shootings, until the event is over.

The officers who agreed to resign will no longer work as part of the Rapid Response Team – but will remain employed by the police department, according to the police bureau. Participation in the riot team is voluntary. The Oregonian reported that internal conversations between the police department’s top brass, the mayor’s office and a union representative were continuing Thursday.

The police bureau referred Fox News to a statement from Chief Chuck Lovell in response to the officer’s indictment.

"Law enforcement is held to a higher standard and must constantly strive to live up to that standard. PPB has processes of accountability in place that take time to complete," Lovell said in a statement released Tuesday. "As Chief, I have a role to play in the Police Bureau’s internal process associated with this case and therefore, I cannot provide additional details."

The police department "remains committed to providing public safety service to this city, where our personnel respond with professionalism and compassion," he said. "PPB has worked hard over the years to revamp our policies and training and we continue to look for additional ways to maintain our community’s trust. I ask for the community’s patience as we follow the guidelines of the established internal accountability process."

The Portland Police Association accused Multnomah District Attorney Mike Schmidt of ignoring the reality of the violent nature of the crowd and Jacob’s criminal activity. The union stressed that Budworth did exactly as he was trained, arguing that the Portland Police Bureau’s own experts reviewed his actions and found them "reasonable, permissible, and in accordance with his training."

"We ask our community to wait for all the facts before passing judgment. We trust in our criminal justice system when the system fairly and objectively applies the rule of law," the union said. "Once the full picture is revealed, we are confident that justice will prevail, and Officer Budworth will be exonerated of all charges. And we look forward to seeing the District Attorney’s office make progress on prosecuting the real criminals who are perpetrating vandalism, arson, gun violence, and other violent crimes in our community. We stand by our officer, truth, and justice."

In a statement following the indictment, Schmidt said, "In this case, we allege that no legal justification existed for Officer Budworth’s deployment of force, and that the deployment of force was legally excessive under the circumstances," according to Oregon Public Broadcasting.

"My office will continue to do everything we can to ensure justice is done without error or delay and that we make sure our work and practices are rooted in fairness and equity," Schmidt added.

"Teri Jacobs, was brutally beaten in the head, neck, back, and face with a baton by Corey Budworth at a protest. Officers nearby did not intervene to stop him," her attorney, Juan Chavez, said in a statement on Tuesday. "One indictment, while undoubtedly significant and a wakeup call to Portland Police officers, will not fix problems with policing in our city."

The city of Portland agreed to pay Jacobs $50,000 in a civil settlement related to the incident. She was reportedly wearing press credentials at the time.