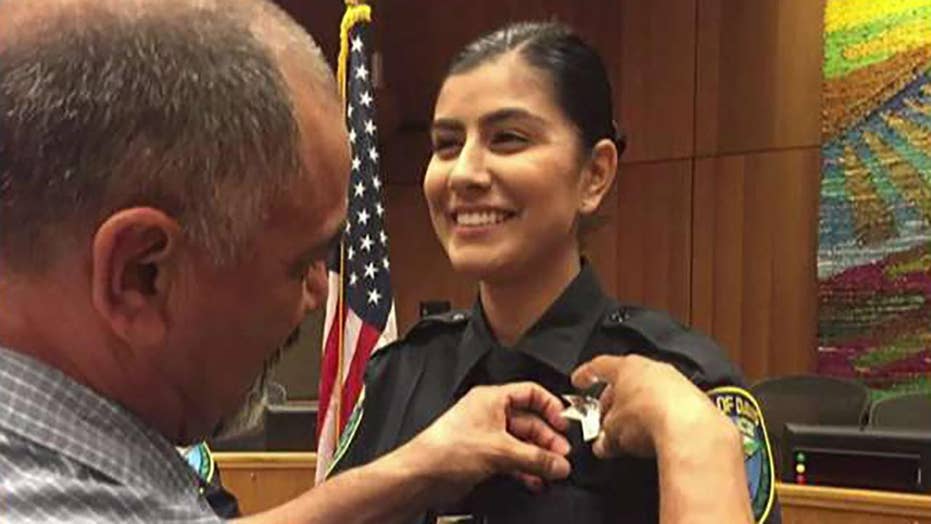 Police Officer Natalie Corona, the rookie cop who was killed in the line of duty Thursday night in Davis, Calif., was the victim of an "ambush"-style attack, authorities said.

Corona, 22, was fatally shot by a gunman who approached on a bicycle and then continued firing shots at a variety of targets before eventually killing himself as police followed him to his home.

The suspect -- described only as a white male in his 20s -- had no prior criminal record or history of violence, according to police officials who spoke at the news conference.

Pytel declined to release the name of the gunman, noting that the attacker's only previous contact with the department came last year when he was the victim of a crime that the chief said was “nothing that was extraordinary at all,” the Sacramento Bee reported.

The attack occurred around 7 p.m. as Officer Corona responded to a three-car collision. While she was at the scene, the gunman rode up on a bicycle, walked up to Corona and began firing, Pytel said.

The gunman then began firing indiscriminately, striking a nearby firetruck, a house, a passing bus and the backpack of a woman whose life was spared when the bullet became lodged in a textbook, the chief said.

“This clearly, to us, looks like an ambush,” Pytel told reporters.

After the shooting, the gunman ran toward a rental home he shared with a roommate where he gave no hint about the rampage he had just conducted outside, Pytel said.

Once police surrounded the home, he came out.

"At one point he did come out,” Pytel said. “It appeared to officers that he was wearing a ballistic vest, a bulletproof vest. He shouted some stuff, went back in and came back out with a firearm, then went back inside, pushed a couch in front of the door and officers heard a gunshot.”

The gunman had shot himself in the head inside the house, Pytel said.

Corona, who graduated from the Sacramento Police Department’s training academy in July, had been shot once and fell to the ground. The suspect reportedly fired at her multiple times and emptied his magazine before reloading and shooting again.

Pytel described Corona as a "rising star in the department."

A firefighter present at the scene when the shooting began was shot in the boot but was not hit, police told CBS 13 in Sacramento.

Corona's death was the first in the line-of-duty for Davis police in 60 years.