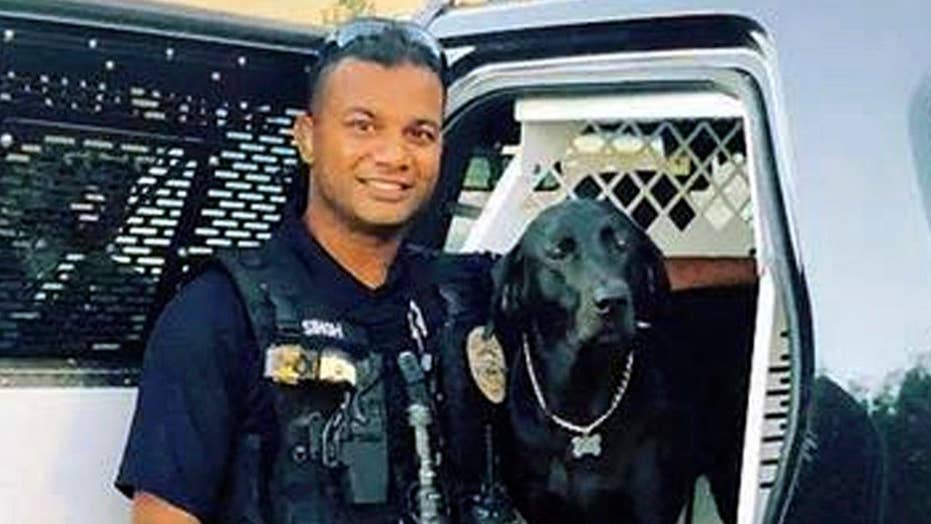 Hundreds of cops packed a California church Saturday in final salute to police officer Ronil Singh who was killed the day after Christmas when he stopped an illegal immigrant suspected of driving drunk.

Ronil Singh, 33, a member of the Newman Police Department, was eulogized as a dedicated cop and a loving husband and father who grew up in his native Fiji watching cop dramas on TV and dreaming of being a police officer in the U.S.

“He told me he came to this country with one purpose that one purpose was to become a police officer,” tearful Newman Police Chief Randy Richardson said during his eulogy.

The funeral service at CrossPoint Community Church in Modesto began with a moment of silence and bagpipers playing "Amazing Grace." Singh's casket stood at the foot of the altar draped by an American flag. Richardson and the others who spoke stood at a podium with Singh's photo.

Richardson said those who had offered him their condolences included people Singh had arrested on the street.

“He found a way to arrest people and put a smile on their face,” the chief said.

Gustavo Perez Arriaga, 32, a Mexican national, has been accused of killing Singh around 1 a.m. Dec. 26. He was arrested two days after the murder as he prepared to flee to Mexico, officials said.

The case has rekindled a debate over California's sanctuary law that limits cooperation with federal immigration authorities. President Trump seized on the case to call for tougher border security amid a fight with congressional Democrats over funding for a border wall, which has forced a partial government shutdown.

FAMILY OF CALIFORNIA COP SAYS WIDOW HAD ‘GOOD CONVERSATION’ WITH PRESIDENT TRUMP, RELEASES NEW VIDEO OF HIM WITH SON

Reggie Singh told the church his family, including his brother, “legally migrated” to the U.S. in 2003.

Singh said he knew that this was what his brother wanted.

“He wanted justice and justice will be served,” he said.