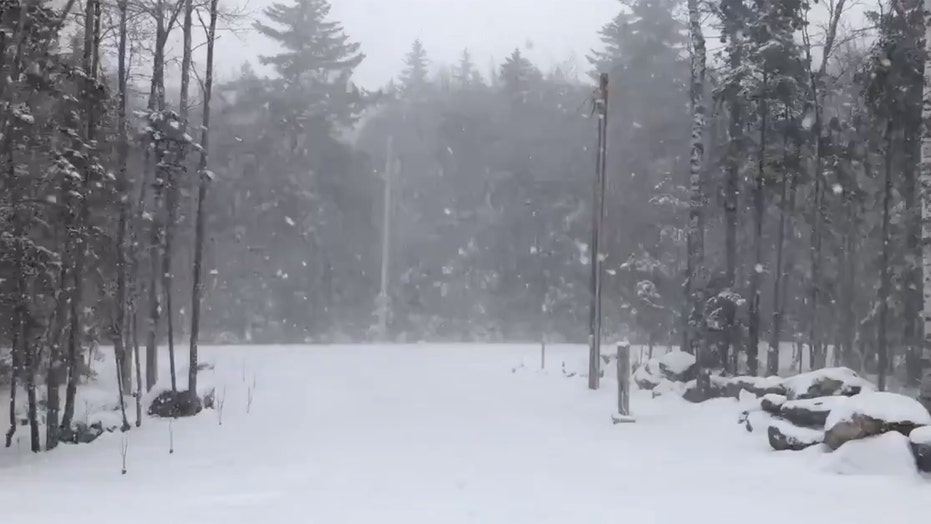 Thousands of people were without power in Maine after a punishing spring storm brought snow and high winds Saturday to New England.

The frigid cold, caused by a polar vortex that blasted in from the north, set a number of records across the region, forecasters said.

The National Weather Service said unusually chilly conditions are expected to linger Sunday across the Central Plains, Midwest, Mid-Atlantic and Northeast ,with freeze warnings and frost advisories in effect.

"We have another really cold morning across parts of the Northeast," Fox News chief meteorologist Rick Reichmuth said on "Fox & Friends Weekend." "It is going to get better. In fact, temps today are going to be back up into the 60s for a lot of people, so that snow that we had yesterday will be gone, but we do have one more chilly morning to get through with this."

The polar vortex is a batch of cold air that stays trapped in the Arctic all winter, but a couple of times during the season, it can wander south and bring bone-chilling cold and snow to Canada and parts of the U.S.

Snow showers were still being reported in parts of the Northeast after the polar vortex brought Arctic air for Mother's Day Weekend. (Fox News)

A low-pressure system off the coast of southern New England on Friday helped pull the cold air down from the north, lan Dunham, a meteorologist with the NWS in Norton, Mass., told The Associated Press.

In this photo provided by Robert Beretta, snow accumulates on the grass and vehicles in Monroe, N.Y., Saturday, May 9, 2020. (Robert Beretta via AP)

Much of the Northeast saw rare May winter weather conditions, with freezing temperatures, snow and high winds from late Friday through Saturday.

Strong winds in Maine left almost 11,000 customers without power Saturday night across a dozen counties. Gusts were reported up to 50 mph.

“This is the kind of day when outage numbers will fluctuate,” Central Maine Power spokeswoman Catharine Hartnett told the Portland Press-Herald. “The wind is responsible, but it is not so persistently gusty that we can’t make repairs as outages occur today."

Utility crews were working to make repairs as quickly as possible.

POLAR VORTEX TO BRING 100-DEGREE DIFFERENCE ACROSS THE US

Higher elevations in northern New York and New England saw snowfall accumulations of up to 10 inches, as traces of snow were reported from coastal Maine to as far south as New York City, where the flakes tied a record set in 1977 for latest snow of the season in Central Park.

Several inches of “light and fluffy” snow accumulation near Readsboro, Vermont can be seen on Saturday, May 9, 2020. (@VermonsterWx via Storyful)

Up to 10.5 inches of snow was reported in higher-elevation communities, such as Sugar Hill, New Hampshire, which got 10.5 inches, and Carrabassett Valley in Maine, which had 9 inches..

Snow squalls were reported in Vermont, where Radek Przygodzki posted a video to Twitter from Lyndonville with the caption: “A decent snow squall moved through this evening. Unreal pattern for May.”

The NWS in Burlington said Saturday was only the 15th time on record that snow has fallen in the region in May.

Binghamton, N.Y., broke the record for the coldest temperature in all of May, while State College, Pa., tied its May low-temperature record, according to the NWS.

Freeze watches and warnings remained in effect for much of the Northeast on Sunday morning.

Freeze warnings and frost advisories in the Mid-Atlantic and Northeast on Sunday. (Fox News)

Temperatures were below freezing Sunday morning in parts of New Jersey and New York, and a freeze warning was issued for parts of Pennsylvania.

"Get ready for another chilly morning," Reichmuth said Sunday.

The forecast of Mother's Day across the U.S. (Fox News)

Forecasters from the NWS Weather Prediction Center said that while temperatures will warm during the day on Sunday, the eastern and central regions of the U.S. are facing more record-breaking cold Tuesday morning.

The wintry weather came two days after Vermont began to lift restrictions on tennis, golf, and other outdoor activities that had been imposed to help control the coronavirus outbreak.

Gov. Phil Scott tweeted sympathy to Vermonters frustrated by the weather following weeks of being inside their homes.

“I know snow on May 9th isn’t a welcome sight for many Vermonters, just as we’re cautiously allowing outdoor recreation to get going again,” he wrote. “But this is just a snapshot in time. Just like better weather is ahead, better days will come, as well. We will get through this, together.”