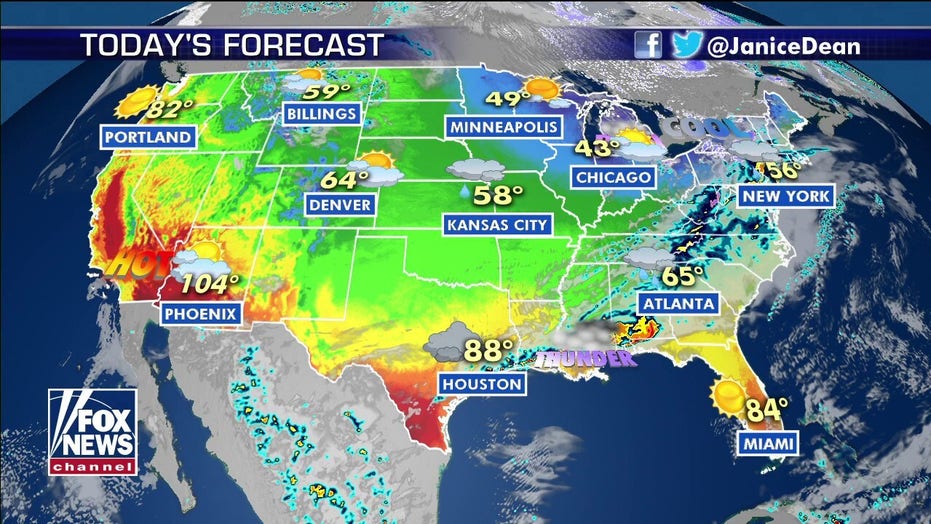 National forecast for Friday, May 8

A polar vortex will create a roughly 100-degree change across the United States on Saturday, according to reports.

The National Weather Service advised that the Northeast can expect winter-like temperatures, with Mount Washington, N.H., seeing lows around 8 degrees. Polar air pushed in from Canada will drive down temperatures across the region starting Friday.

Parts of upstate New York, New Hampshire, Vermont and Maine can expect to see anywhere from 1-3 inches of snow. The coldest air will settle in across the eastern third of the country over the next two mornings.

Some locations might see more than 6 inches of snow on Saturday.

The NWS also issued freeze advisories for parts of the Midwest and into the Appalachians, with frost warnings in Illinois, Missouri and Kansas, among others.

On the other side of the country in Death Valley, California, temperatures will peak at around 109 degrees. Phoenix can expect an average of 104 degrees throughout Friday and into the weekend.

The projected highs and lows across the country would both be records.

“What's all the fuss about cold Sat?” the NWS Boston tweeted on Wednesday. “The coldest recorded temp May 10th is -7C & -9C 4 all of May. Colder temps are possible Sat/Sat ngt!”

The NWS tweeted a warning of flash flooding in the Southern Plains on Friday to kick off the weekend of extreme weather.

In the South, severe storm warnings are in effect, with scattered strong storms across the Gulf Coast on Friday, particularly in Southeastern Texas through Louisiana to Mississippi.

The most extreme weather patterns are projected to include large hail, flash flooding and isolated tornadoes in all three states. Tornado season typically peaks in May when more than 250 twisters are reported, on average.

This year is projected to have higher than average hurricane activity, with roughly 40 percent more activity, resulting in four major hurricanes coming in from the Atlantic.