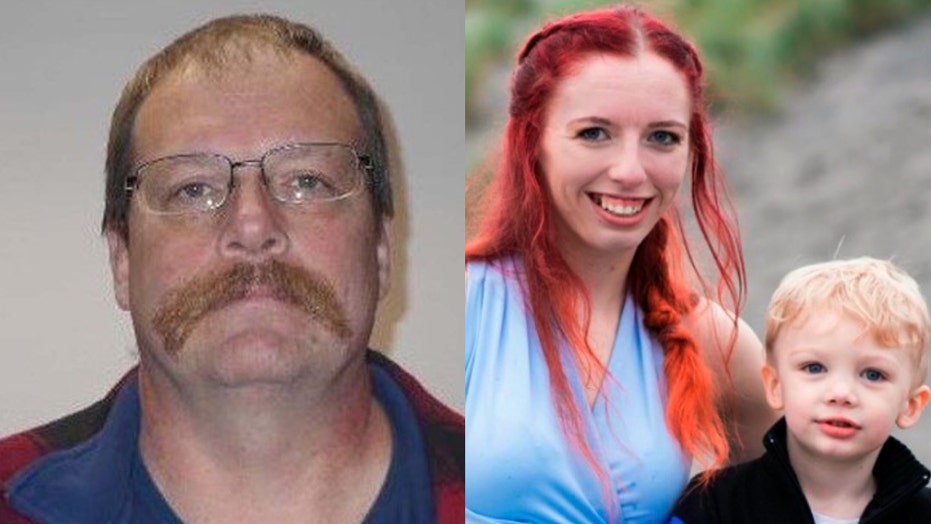 Authorities made a grim discovery in remote Oregon over the weekend — the bodies of a 3-year-old boy and his mother, who had been missing for a month and who authorities believed were murdered.

The disappearance of Billy Fretwell, and Karissa Fretwell, 25, of Salem, Ore., led to kidnapping and murder charges against a married man who had been ordered to pay child support to the woman after a paternity test determined he was the boy’s father, according to reports.

Michael John Wolfe, 52, of Gaston, Ore., has been jailed since his arrest May 24 --11 days after Fretwell and Billy were last seen.

Bodies found in remote Oregon over the weekend belonged to a missing woman Karissa Fretwell, 25, and her 3-year-old son Billy Fretwell. Their disappearance led to the arrest in May of Micheal Wolfe, 52, of Gaston, on kidnapping and murder charges. (Yamhill Sheriff's Office )

The bodies were found Saturday after a two-hour search in rural Yamhill County, Fox 12 Oregon reported.

The coroner’s office said Sunday that a bullet to the head killed Fretwell but that Billy’s cause of death awaited more tests, the station reported.

“I kind of knew,” Fretwell’s best friend Bethany Brown told the station. “People just don’t stay away from their phones for a month.”

A family member reported Fretwell and Billy missing May 17, the Oregonian reported Sunday. The person told police the TV in their apartment was on but they weren’t there and the door was unlocked.

Fretwell then sued Wofle for child support which led to a hearing April 15.

Wolfe told police in interviews that the hearing “did not go well” because he was ordered to pay Fretwell $900 a month for Billy’s care, the Oregonian reported two weeks ago.

He told his interviewers he never saw Fretwell again after the hearing, according to the article which also reported that Wolfe drew suspicion after surveillance video showed him walking near a tree line and then disappearing for five hours during an overnight shift at a steel mill where he worked May 14.

In her Facebook profile, Fretwell, a student at Western Oregon University, wrote, "My son is my world ... Future WOU graduate, BIG DREAMER!"