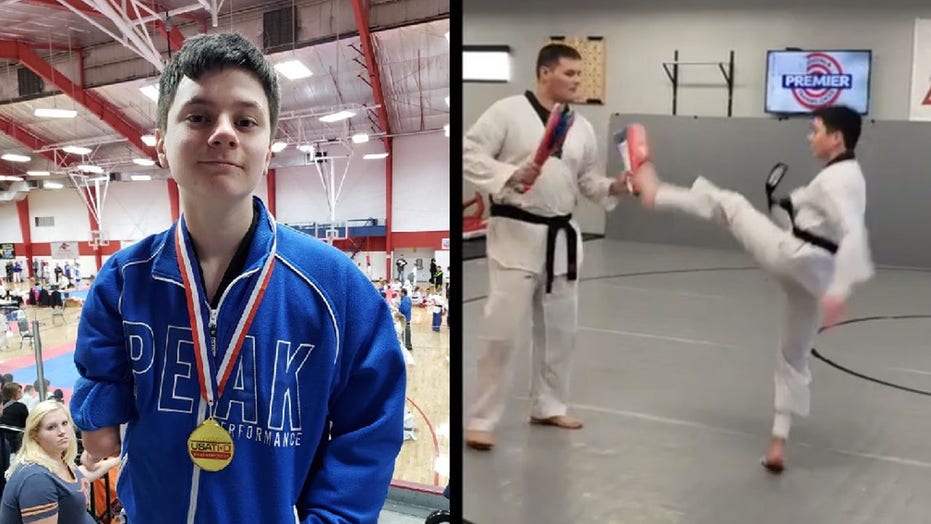 Five feel-good stories from the week of Oct. 19- Oct 25. Check out what’s clicking on Foxnews.com.

An Ohio teenager who was once bullied for having an amputated arm is now crushing it in martial arts and has his eyes set on representing Team USA in the Paralympic Games.

Austin Osner, 14, of Fairfield, was born with Amniotic Band Syndrome, born with only his left arm, but he said life without a limb has given him limitless opportunities to meet new challenges and help others along the way.

"It's been surreal," he told Fox News. "It's bigger than I ever imagined...something I'm going to be grateful for for the rest of my life."

Austin Osner, 14, went from being bullied into depression and getting bad grades to becoming a taekwondo champion with straight As, hitting bullying head-on. (Austin Osner)

Today, he's a straight-A student dual-enrolled in college classes and the Ohio Virtual Academy, an online public school, and he is part of the Peak Performance International Taekwondo Team, training in Michigan, Ohio, and in Florida throughout the year.

Four years ago, however, he was bullied at public school to the point of depression, getting poor grades, and eventually forced to withdraw. "It affected me a lot," he said.

Kristin McGinn told Fox News taking him into a "bully-free environment" was one of the best decisions she's ever made.

From left to right: Austin Osner, his training partner, Evan Medell, currently ranked 1st in the world for Para-Taekwondo and preparing for the 2020 Paralympic Games, and coach Brad DeMinck. (Kristin McGinn)

"He was more concerned by the stares and what everyone thought of him," she said, but "the change has been dramatic."

One of the biggest moments for Austin was attending a camp for amputee children hosted by USA Patriots, a nonprofit with a mission "to bring athletic and veteran amputees together to promote the benefits of inclusive sport and therapeutic recreational activities."

He added, "I kind of figured I wasn't the only one, but getting to interact with other people who were like me was pretty good." Last year, alongside one of the wounded warriors, Cody Rice, from that camp, Austin went back to the public school where he'd been bullied and spoke in front of 1,000 people, sharing his story.

Austin Osner pictured with Cody Rice of USA Patriots. The two spoke at the public school where Austin was once bullied. (Kristin McGinn)

And, he won his first Taekwondo competition.

"I always had these limits and started to push them," Austin, who is now a black belt, said. "That kind of helped me out and made me want to compete even more."

DeMink is training Austin for the 2024 Paralympic Games, but the elite athlete has won several state Olympic sparring tournaments against non-disabled competitors.

"I never really imagined that I would be the one to reach out to people," Austin said, adding that someday he hopes to start a summer camp, like the one that helped him, for amputee children.