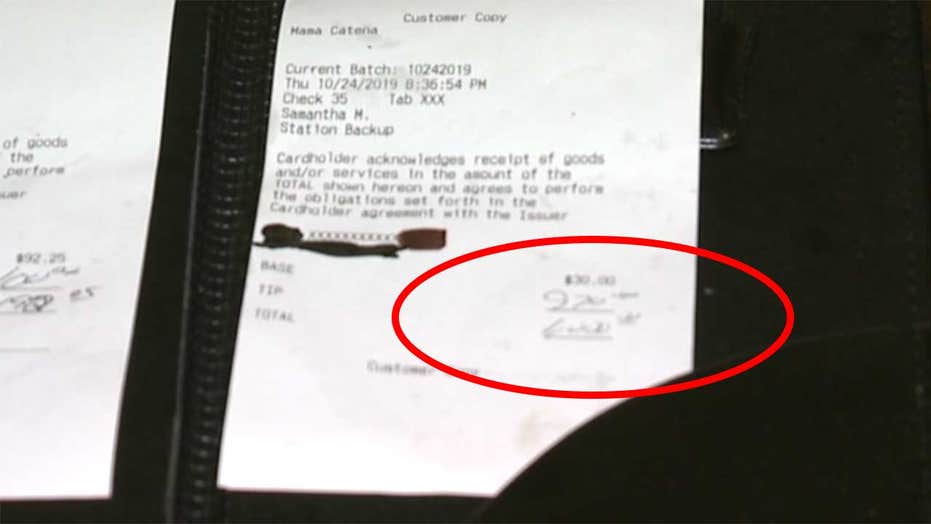 The portions at Mama Catena Vino e’ Cucina seem quite generous, but that’s nothing compared to the customers.

An out-of-town couple who stopped into the Ohio restaurant on Thursday night reportedly had such a “wonderful” experience that they left their server a thousand-dollar tip — $1,070, to be exact.

SEE IT: WAITRESS RECEIVES 2019 BUICK AS A TIP

"There’s been very generous folks throughout the years, but nothing like this. Nothing close to this amount," said Rina Catena, who co-owns the Euclid eatery with her sister Fran, in an interview with Fox News.

"It was very heartwarming," Fran added. "At first, you can’t believe it’s happening.”

The owners say the couple came in on Thursday evening and ordered some wine, appetizers and entrees before initially leaving a $100 tip. Samantha “Sam” Meyer, who was their server for the evening, added to Fox 8 that she initially thought the tip was a mistake. She then returned to the table to inquire about the figure on the check, but the man assured her that he meant to leave $100.

“You were wonderful. This place is wonderful. I’d like you to have a good night,” the man said, according to Meyer.

Samantha “Sam” Meyer has been working at the restaurant since she was a teen, the owners tell Fox News. "No one deserved this more than Sam."

This was enough to nearly bring Meyer to tears. But when he asked if he could purchase a $30 bottle of wine to go — and left another $970 tip on that — she told Fox 8 she “couldn’t even move.”

According to the Catena sisters, Meyer chased the couple out of the restaurant out of confusion, only to again be told that the gratuity was no mistake. Meyer then asked the husband who he was, but he declined to answer, and simply wished her a good night.

"She was literally shaking," the owners told Fox News.

Mama Catena’s owners now say they consider the man to be an "angel," according to Fox 8. Meyer, too, likened the man's act of kindness to “some sort of miracle,” as she was struggling with bills this month.

“God works in mysterious ways,” Meyer told Fox 8. She also told the outlet that she didn't keep the entirety of the tip, but instead shared it with her fellow restaurant employees.

"No one deserves this more than Sam," the Catena sisters told Fox News, adding that Meyer has been working at the restaurant since she was 15.

“We’re just so grateful," Fran added. “I want him to come back. I just want to give him a hug.”